Crowland is a small town in southern Lincolnshire, in the Fenland between Peterborough and Spalding. Historically is has been known as Croyland, this earlier version of its name attaches to the parish and the famous Croyland Abbey, around which the town was founded.

Crowland stands in the fenland, a remote location which the monks of old chose for retreat as long ago as the seventh century and though the fens have been drained, there are few lanes between the fen's vast fields and the town's links with the wider word are accordingly limited.

Crowland is nearer to the outskirts of Peterborough in Northamptonshire than Spalding in Lincolnshire. It is less than a mile from the bounds of the Soke of Peterborough. The main road is the A16, which provides connections with Spalding to the north and Peterborough to the south (by way of the A47). The east-west B1166 connects with Deeping St James, the north side of the Welland to the west and Holbeach Drove to the east, and Thorney is accessed by the B1040 to the southeast.

Fen Bridge over the River Welland 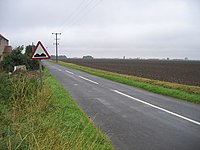 At Kennulph's Stone, it no longer borders Peterborough but South Kesteven and the parish of Deeping

Crowland falls within the drainage area of the Welland and Deepings Internal Drainage Board.[1]

The Crowland Ponds Nature Reserve is north of the town, next to the west side of the Welland.

The parish church is known as Croyland Abbey and is the church of the ancient abbey which stood here for eight hundred years. Its full name, taken from the of the mediaeval abbey is "the Church of the Blessed Virgin Mary, Saint Bartholomew, and Saint Guthlac".

Croyland Abbey was founded in memory of St Guthlac early in the eighth century by Æthelbald, King of the Mercian. The fens did not entirely protect it though: Vikings ravaged and destroyed it in 866 and it had to be refounded by King Edred, and fire destroyed it in 1091 and 1170. After this though it grew rich on its lands until the Dissolution in 1539, and Edward VI granted the Abbey to Lord Clinton. The remains of the abbey were fortified by the Royalists in 1643, and besieged and taken by Cromwell in May of that year. Only the church of the abbey remains in good order, and serves as it ever has as the parish church for Crowland.

The church has a nave of nine bays with aisles, 183 feet long by 87 wide and two towers; a central tower and a detached bell-tower at the east end. The west front has a splendid aspect, built in the twelfth and fourteenth centuries, elaborately decorated with arcading and statues, it is thought in imitation of Wells Cathedral. Sir Gilbert Scott was one of the architects who took a hand in its restoration. 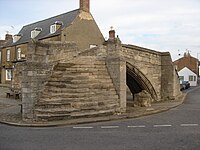 In about 701 a monk named Guthlac came to the Fens to live the life of a hermit. He settled on an island in the marsh, which is where Crowland now stands. According to the Life of Saint Guthlac, he was a prince of the old Mercian royal house, the Icelingas, perhaps driven out by the new King Penda, and he settled here though assailed by evil spirits of the fens, with which he fought.

Following in Guthlac’s footsteps, a monastic community came into being here, and the abbey was formally established in Guthlac’s memory by King Æthelbald in 716, dedicated to Saint Mary the Virgin, Saint Bartholomew and Saint Guthlac. The Croyland Chronicle,[2] an important source for mediæval historians, is believed to be the work of some of the monastery's inhabitants. Marshland beside the island was drained and a town gradually grew up near the abbey.

The Abbey was dissolved under King Henry VIII in 1539 and its church became the parish church, as it remains.

During the Civil War, the town was captured after a short siege by Parliamentarian forces in 1643.[3]

The Great Northern and Great Eastern Joint Railway crossed the north-east part of the parish until the 1980s. It passed near De Key's Farm to the east and Martin's Farm to the north. Postland railway station was near Postland House.

Croyland Abbey is a ruined mediæval monastery and all that remains of the ancient Abbey on which the town was founded.

Trinity Bridge was built in the 14th-century and it three-ended. It stands at its central point of the town and used to be the confluence of three streams,[4] though now it on dry land.