Coningsby is a village in Lincolnshire, in the midst of the county, seven miles south of Horncastle on the A153 Horncastle to Sleaford road.

The Lincolnshire Wolds rise to the west and the Fens stretch away to the east. The B1192 Kirton to Woodhall Spa road passes through the village. At the village's western end it is separated from the village of Tattershall by the River Bain.

A railway line passing through the village opened on 1 July 1913 but closed on 5 July 1970. The Coldham Road Industrial Estate now occupies the site of the former Coningsby railway station. The line was known officially as the Kirkstead and Little Steeping Railway, though it was universally known by the local people and the railway workers as "The New Line". 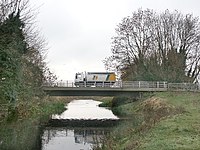 Bridge over the River Bain

The village takes its name from the Old Norse konungs by meaning "King’s Village". 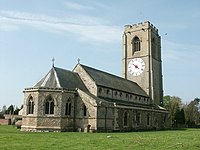 Coningsby is overlooked by the tower of its 15th century parish church, St Michael's.

The church tower has a most unusual clock, with a one-handed clock face. It is one of the few one-handed clocks in the country (there is another at St Andrew's in Holt, Norfolk) and the largest. The face is painted directly onto the wall of the tower and was probably installed in the 17th century. The clock-face is 16½ feet in diameter and its hand is nearly 9 feet long. The driving weights are large stones and its pendulum swings once every two seconds. The pendulum is not attached to the clock but some distance away, linked by a connecting rod. There are three wheels in the timekeeping mechanism, which needs winding once a day. The tower on which the clock face is painted is on the outside of the building.

An arched passage under the church tower is part of a public footpath from the High Street (the A153) to the school in School Lane, through the churchyard.

The village has three pubs, the Black Swan and the White Bull, both on High Street, and the Lea Gate Inn on Leagate Road.

Typhoon of No.3 Squadron

Half a mile to the south of the village lies RAF Coningsby, one of the Royal Air Force's most important stations, home of No. 3 Squadron, No. XI Squadron, No. 29 Squadron and No.41 (R) Squadron

The airfield houses part of Britain's heritage, the Battle of Britain Memorial Flight formed in 1957 to commemorate the Royal Air Force's major battle honours, with a Lancaster, five Spitfires, two Hurricanes and a Dakota. These aircraft still fly and can be seen at air shows during summer.[1]

From 1950 RAF Coningsby was home to three squadrons of Washingtons, the RAF name for the American B29 bombers, and for the first 18 months these were maintained by National Service technicians whose conscription was extended to 24 months because of their particular skills.