From Wikishire
(Redirected from Horncastle, Lincolnshire)
Jump to: navigation, search

Horncastle is a small market town in Lindsey, the northern part of Lincolnshire. It is 17 miles east, and 22 miles by road from the county town, the City of Lincoln. Horncastle’s population was estimated at 6,651 in 2010.

Holbeach lies to the south of the Lincolnshire Wolds, where the (north-south) River Bain meets the River Waring (from the east), and north of the West and Wildmore Fens.

The south of Horncastle is called Cagthorpe. Langton Hill is to the west.

The parish church is St Mary's. It is a 13th-century church and a Grade II* listed building which was heavily restored between 1859 and 1861 by Ewan Christian.[1]

The Romans built a fort at Horncastle, which possibly became a Saxon Shore Fort.[2] Although fortified, Horncastle was not on any important Roman roads, which suggests that the River Bain was the principal route of access.

Roman Horncastle has become known as Banovallum (i.e. "Wall on the River Bain") – this name has been adopted by several local businesses and by the town's secondary modern school – but in fact the actual Roman name for the settlement is not definitely known:[2] Banovallum was suggested in the 19th century through an interpretation of the Ravenna Cosmography, a 7th-century list of Roman towns and road-stations;[3] Banovallum may in fact have been Caistor.

The walls of the Roman fort remain in places — one section is on display in the town's library, which is built over the top of the wall.[2] The ancestral English tribes called the town Hyrnecastre, whence arose its modern name. 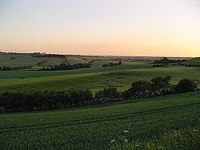 From the Lincolnshire Wolds south to Horncastle

Horncastle is listed in the Domesday Book of 1086 as consisting of 41 households, including twenty-nine villagers and twelve smallholders, and had 100 acres of meadow and two mills, all belonging to The King.[4]

Four miles from Horncastle is the village of Winceby, where, during the Battle of Winceby in 1643 – which helped to secure Lincolnshire for Parliament – Cromwell was almost killed.[5] Local legend has it that the thirteen scythe blades which hang on the wall of the south chapel of the town's church, St Mary’s, were used as weapons at Winceby. This story is generally regarded as apocryphal, and the accepted opinion is that they probably date from the Lincolnshire Rising of 1536.[6][7]

Horncastle was given its market charter in the 13th century. It was formerly known for its great August Horse Fair — an internationally-famous annual trading event which lasted until the early 20th century. The town is now known as a centre for the antiques trade.[8]

The great annual horse fair probably first took place in the 13th century. The fair used to last for a week or more every August, and in the 19th century was probably the largest event of its kind in the United Kingdom. "Horncastle for horses" made the town famous – the fair was used as a setting for George Borrow's semi-autobiographical books Lavengro and The Romany Rye – but the last fair was held in 1948.[9]

In 1894 the Stanhope Memorial was erected in the centre of the Market Place in memory of Edward Stanhope MP by E. Lingen Barker. Built of limestone, red sandstone and pink and grey streaked marble, it is a Grade II listed structure.[10]

New housing by the River Bain

Folklore belief associates the occurrence of floods with the changing of Horncastle's vicar. The vicar changed in 1919 and 1959, both less than a year before a flood. The flooding of the early 1980s was attributed to the change of vicar in 1980, however, there was no flooding in Horncastle following the change of vicar in 1999. Both the River Bain and River Waring burst their banks during the 2007 floods.[11][12][13]

Further flooding occurred in 2012.[14] A 30-year-old proposed flood defence scheme was seen as unlikely to have prevented the 2012 flood,[15] however, the installation of a new anti-flood pump was confirmed in 2013.[16]

Real-time river levels are available from The Environment Agency:

and flood warnings for the town: 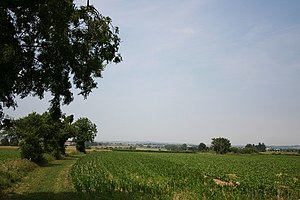 View northwards towards the town from Dalderby