From Wikishire
(Redirected from Gunby Hall)
Jump to: navigation, search

Gunby Hall is a country house in Gunby, on the edge of the Lincolnshire Wolds near Spilsby, in Lincolnshire.

The house reached by a half-mile long private drive.

It was of Gunby that Tennyson wrote the lines a haunt of ancient peace.

The house is built from red brick, and was built in 1700 for Sir William Massingberd. Many of the interiors of the house are wood panelled, and it has 8 acres of Victorian walled gardens, which contain traditional English flowers, fruits and vegetables. The Hall is a Grade 1 listed building.[2] It was substantially extended in 1873 and again in 1898 with the addition of the North Wing and Clock Tower.

Surrounding the hall is a 100-acre park, listed as being of historical significance and laid out in the style of Lancelot "Capability" Brown. Around that is a farmed estate of 1,500 acres. The Massingberd estate used to extend to many thousands of acres and reached the coast at what is now Skegness, but land was sold in the 19th century to the Earl of Scarbrough who built the town of Skegness to satisfy increasing demand from tourism created by the expansion of the railways.

The gardens are laid out in an informal style with large Victorian Walled and Kitchen Gardens, lawns, an arboretum and carp pond believed to be older than the main hall. There are 50 types of apple tree, 21 of pear and over 50 types of rose in the gardens. There is also a 17th-century dove cote, a grass tennis court, croquet pitch, cottage, apple store and studio.

On the edge of the formal gardens and within the Park lies St Peter's Church. Rebuilt on Mediæval foundations in the 1870s the Church is accessible only through the Hall's gardens but it remains the active Parish Church of Gunby with a service once a month. 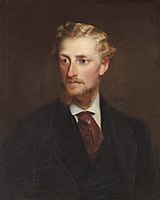 Edmund Langton whose children gave Gunby to the National Trust

The last notable resident owner was Lady Montgomery-Massingberd (1873–1963) born Diana Langton.[3] Both her parents were direct descendants of Bennet Langton.

Gunby Hall and Gardens are opened to the public by the National Trust.

A legend attached to Gunby Hall is of a brutal murder that occurred during Sir William Massingberd's residency. It was said that Sir William discovered that his daughter (or some accounts say his wife; it is a mere local rumour) was about to run away with one of the servants, a postillion. On the night the lovers intended to flee, Sir William hid in waiting and shot the postillion dead. The servant's body was dragged through the grounds and thrown into the pond. Some accounts say that Sir William was so enraged he shot his daughter dead as well.

Word of the secret murder must have got out because soon locals were whispering that Gunby Hall was cursed and that no male of Massingberd's descent would ever inherit the house. They say 9at least after the pubs have shut) that the ghostly form of the murdered servant has been seen haunting the path by the pond, now called Ghost Walk, eternally waiting for his lover.[4]