The Lincoln Edge, otherwise known as the Lincoln Cliff is a remarkable stretch of high ground that runs north-south through Lindsey and Kesteven in central Lincolnshire It is an escarpment which is a prominent landscape feature in a generally flat portion of the county.[1]

The Edge runs for 50 miles due north-south, its northern end close to the Humber and its southern end at Grantham. Its height varies but is typically 200 feet above sea level, but this still towers over the fenland to the east. The Lincoln Edge forms a natural boundary between the two sides of Lincolnshire, between the fenland of the east out to the North Sea coast and in the west the farmland merging into the Midlands.

The City of Lincoln stands where the River Witham punches a gap in the Edge, which explains the city's precipitous streets, running down to and up from the riverside.

It is believed that an ancient, even prehistoric, route ran along the top of the edge, which has been labelled "the Jurassic Way".[2]

The scarp is formed by resistant Middle Jurassic rocks, principally the Lincolnshire Limestone series,[3] and is remarkable for its length and straightness. It runs for over 50 miles from the Leicestershire border near Grantham to the River Humber, and is broken only twice by river gaps at Ancaster (the River Slea) and Lincoln (the River Witham).[1][4] 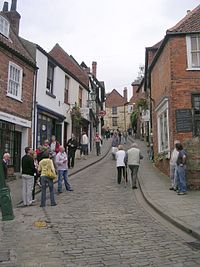 South of Lincoln the 'cliff villages' that lie on the escarpment are as follows, listed in order of southerly procession:

North of Lincoln, the name Lincoln Cliff, or simply the Cliff, is locally used to refer to the ridge, not just its steep western scarp, and this can be seen in placenames such as Welton Cliff, Saxby Cliff and Caenby Cliff, reflecting parish-based divisions of the ridge. This use of the name "Cliff" is not found south of Lincoln, where the term 'Cliff' refers only to the scarp itself, and the limestone plateau is called the 'Lincoln Heath'. The Lincoln Edge or Lincolnshire Edge is the general name for the whole range.[4]