Heckington is a village in Lincolnshire. It is in Kesteven, between Sleaford and Swineshead Bridge, and south of the A17 road. This is a substantial village, in comparison to the usual run of Lincolnshire's villages, with 1,491 households recorded at the 2011 census.

The parish church is St Andrew, built uniformly in the Gothic style from the 14th century. Today it is a Grade I listed building.[1]

The church is built in a cruciform plan. The original 14th-century church was acquired by Bardney Abbey in 1345, and subsequently a new chancel was built by vicar Richard de Potesgrave, chaplain to King Edward III. Potesgrave's damaged effigy is within the church; other memorials include brasses to John Cawdron (d. 1438), and William Cawdron "baylyf of Hekington" and his two wives. The steeple is from 1360–70; it was rebuilt in 1888 as part of a restoration,[2] after a previous church restoration of 1867.[1] Over the south porch are the attributed arms of Edward the Confessor, adopted by Richard II in 1380.[2]

The church has original stained-glass windows, one of which depicts the construction of the building itself. The church was featured in 2007 on the Divine Designs programme on Channel Five[3]

The village also has a Methodist church, built in 1904.

The village first appears in the written record in the tenth century.

In 1885, Kelly's Directory reported the existence of one Baptist and two Wesleyan chapels, and in Heckington Fen a chapel of ease in Early English style, and chapels for Primitive and Reformed Methodists.[4] The Methodist church was built in 1904 by the architect Albert Edward Lambert.

The village is best known for its windmill, the only 8-sailed example of its type still standing in the United Kingdom. The tower windmill built as a five-sailed mill in 1830 and turned into an eight-sailed mill after serious storm damages in 1890–92 was formerly (and sometimes still today) named Pocklington's Mill after its last owner John Pocklington. In 1986 the windmill underwent restoration.[5]

The village's 1859-built Heckington railway station has been turned into a railway museum.[6] 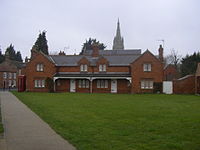 The Heckington Show has been held annually in the village over the last weekend in July since 1864.

Heckington Squash Club is on the High Street.