Lincoln Castle is a major castle constructed in Lincoln during the late 11th century by William the Conqueror on the site of a pre-existing Roman fortress. The castle is unusual in that it has two mottes.[1] It is only one of two such castles in the country, the other being at Lewes in Sussex.

Lincoln Castle remained in use as a prison and law court into modern times, and is one of the better preserved castles in Britain; the Crown Courts continue to this day. It is open to the public as a museum. Lincoln Castle remains one of the most impressive Norman castles in the United Kingdom. It is still possible to walk around the immense Norman walls which provide a magnificent view of the castle complex, together with panoramic views of the cathedral, the city, and the surrounding countryside. 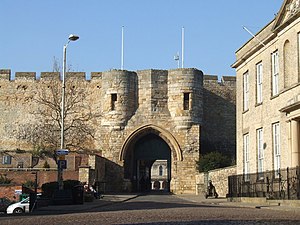 The exterior of the east gate 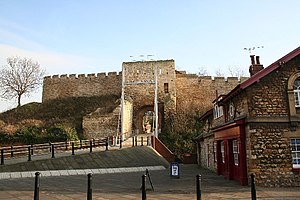 The exterior of the west gate, which was rebuilt in the 1230s. Blocked for centuries, it was re-opened as recently as 1992

William the Conqueror's victory at the Battle of Hastings on 14 October 1066 did not end the war: he faced resistance to his rule in the north for a number of years and in course of pacification he built a number of major castles in the north and midlands, amongst them major castles at Warwick, Nottingham and York. After gaining control of York, the Conqueror turned southwards and arrived at the Roman and Viking city of Lincoln.

When William reached Lincoln (one of the country's major settlements), he found a Viking commercial and trading centre with a population of 6,000 to 8,000. The remains of the old Roman walled fortress located 200 feet above the countryside to the south and west, proved an ideal strategic position to construct a new castle. Also, Lincoln represented a vital strategic crossroads of the following routes (largely the same routes which influenced the siting of the Roman fort):

A castle here could guard several of the main strategic routes and form part of a network of strongholds of the Midlands, holding down a broad country and providing a garrison centre from which troops could be sent to repel Scandinavian landings anywhere on the coast from the Trent to the Welland, to a large extent, by using the roads which the Romans had constructed for the same purpose.

The Domesday Book records that in Lincoln 166 "unoccupied residences" were pulled down to clear the area on which the castle would be built.[2]

Work on the new fortification was completed in 1068. It is probable that at first a wooden keep was constructed which was later replaced with a much stronger stone one. Lincoln Castle is very unusual in having two mottes, the only other surviving example of such a design being at Lewes. To the south, where the Roman wall stands on the edge of a steep slope, it was retained partially as a curtain wall and partially as a revetment retaining the mottes. In the west, where the ground is more level, the Roman wall was buried within an earth rampart and extended upward to form the Norman castle wall. The Roman west gate (on the same site as the castle's westgate) was excavated in the 19th century but began to collapse on exposure, and so was re-buried.

The castle was the focus of attention during the First Battle of Lincoln which occurred on 2 February 1141, during the struggle for the Crown between King Stephen and the Empress Maud. It was held but damaged, and a new tower, called the Lucy Tower, was built.[1][3][4]

Lincoln Castle (L) during the Second Battle of Lincoln

Lincoln Castle was again the site of a siege followed by the Second Battle of Lincoln, on 20 May 1217, during the reign of King John in the course of the First Barons' War. This was the period of political struggle which led to the signing of Magna Carta on 15 June 1215. After this, a new barbican was built onto the west and east gates.[3][5]

Other mediæval defensive works in Lincoln have been recorded, but are no longer extant.

The castle was recognised as a secure site in which to establish a prison; the gaol was built in 1787 and extended in 1847. Imprisoned debtors were allowed some social contact but the regime for criminals was designed to be one of isolation, according to the separate system. Consequently, the seating in the prison chapel is designed to enclose each prisoner individually so that the preacher could see everyone but each could see only him. By 1878 the system was discredited and the inmates were transferred to the new jail in the eastern outskirts of Lincoln.[10][11] The prison in the castle was left without a use until the Lincolnshire Archives were housed in its cells. 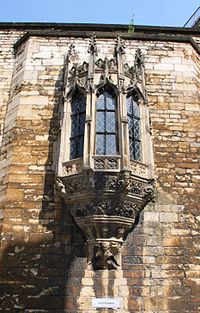 The castle is now owned by Lincolnshire County Council and is a scheduled ancient monument.[12] In 2012, a three-year programme of renovation began at the castle. Work involves creating a new exhibition centre in which to display Magna Carta, building visitor facilities, and opening sections of the prison within the castle to the public. The scheme is to be completed in April 2015 to coincide with the 800th anniversary of the signing of Magna Carta.[13] The Lincoln Castle Magna Carta is one of the four surviving originals, sealed by King John after his meeting with the Barons at Runnymede in 1215, and is accompanied by an exhibition explaining the origin of the book and its far reaching effects.

Parts of the prison are open as a museum, including the 19th–century chapel, the only one remaining in the world designed for the separate system (each seat enclosed). The women's wing of the prison opened to visitors in 2005. The castle's grounds are used for music concerts and other public entertainment. A wall-walk along the top of the outer walls was opened in 2015.

Lincoln Castle is bounded by a stone curtain wall, with ditches on all sides except the south. From an early stage, the outer walls which enclose the site were built in stone and they date from before 1115. On the south side the walls are interrupted by two earthen mounds called mottes. One is in the south-east corner, and was probably an original feature of William's the Conqueror's castle, while the other occupies the south-west corner. A square tower, the Observatory Tower, stands on top of the first mound, standing above the outer walls to dominate the city of Lincoln. The second mound is crowned by the 'Lucy Tower', which was probably built in the 12th century and was named after Lucy of Bolingbroke, the Countess of Chester until 1138.[14]

In the castle grounds are the graves of those executed here for various crimes. They have simple markers featuring only the initials of the condemned and the date of death. William Frederick Horry is buried in the Lucy Tower, along with many other criminals' graves.

The grounds also contain remains of Lincoln's Eleanor Cross,[15] an oriel window moved from Sutton Hall and incorporated into the main gate, and the Bust of George III.[16]

At the western end of the castle is an ivy-clad building built in 1826 as the Assize courts. This is still used today as Lincoln's Crown Courts.[17][18]