Deeping St James is a large village in Lincolnshire, on the north bank of the River Welland which separates Lincolnshire from the Soke of Peterborough in Northamptonshire. A bridge here crosses the river to Deeping Gate.

Deeping St James lies east of Market Deeping; it is one of the villages and hamlets scattered across the adjacent Deeping Fen in Lincolnshire known as "The Deepings", of which informal group Deeping Gate is the only member in Northamptonshire. The Deepings stand in the middle of rich sedimentary agricultural land.

Deeping St James falls within the drainage basin of the Welland and Deepings Internal Drainage Board.[2]

The parish church of is St James, which gives a name to the village. It is within the Diocese of Lincoln.

Based around a now-lost 12th-century Benedictine Priory, destroyed during the Dissolution of the Monasteries,[3] the Grade-I listed Church of St James[4] is the largest church in the Deepings. It is a mixture of Norman, Early English and Perpendicular styles,[5] with a tower and spire added in 1717.[6]

The stones from the priory were used to build various 17th-century buildings in the area.

The village also has an 18th-century village lock-up, constructed on the site and with the materials from a 15th-century wayside cross.[7]

Although the separate cut for the Stamford Canal did not start until upstream of Market Deeping, Briggin's lock (or the Deeping High lock) was an important part of the Welland Navigation, and is still in place but is not navigable.

In the 17th century the manor was associated with the Wymondsold family of Welbeck Place in Putney, Surrey and East Lockinge, Berkshire.[8]

St James Deeping railway station, built by the Great Northern Railway Company in 1848, was closed in 1964.[9] 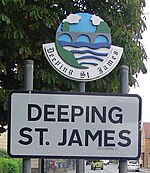