Bourne is a market town in Lincolnshire, in Kesteven. It is on the eastern edge of the Kesteven Uplands and the western border of the Lincolnshire Fens.

The town owes its origin to the Roman road upon which it was built, and also to the exceptionally fine-quality water supply derived locally from natural springs. The name "Bourne" (or "Bourn", as the town was originally known) is a common name for a village on a bourne. The town lies at the intersection of the A15 and the B1193 roads.

As well as the town itself, the civil parish of the same name includes the hamlets of Cawthorpe, Dyke and Twenty.[1] In former years Austerby was regarded by some as a separate village, with its own shops and street plan, but is now an area of Bourne known as The Austerby.[2] 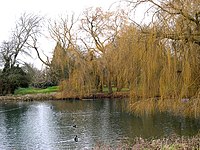 The ecclesiastical parish of Bourne is part of the Beltisloe Deanery of the Diocese of Lincoln.

The parish church is the Abbey Church of St Peter and St Paul, in Church Walk, and is known as Bourne Abbey.

The town's economy was based on rural industries. The coming of the railway opened up a market for mineral waters bottled locally. Today the local economy is still mainly rurally-based, revolving around agriculture and food preparation and packaging geared towards the modern system of supermarkets, but there are also important light engineering and tourism activities. The district as a whole has one of the fastest-growing housing markets in the whole country, with much of the new building taking place in Bourne. The town's population is now (2006) nearer to 15,000 than the 12,000 or so given in the 2001 data. There are approximately 5,424 households in Bourne as of 2007.

Typical fenland farmland on the east of town

Sugar beet was first successfully grown as a British crop, in the fenland east of Bourne, after trials elsewhere in the country had proved unsuccessful, by British Sugar Ltd. It had been developed in Germany and France in the early 19th century. Although Britain's demand for sugar was mostly fulfilled by European beet imports until shortly after 1900, the successful sugar beet production in areas such as that around Twenty, fulfilled the nation's sugar requirements during the 20th century's two World Wars.

Much of Bourne's 19th century affluence came from the corn trade boom following the mechanisation of fen drainage, and the production of wheat is still important. In the 21st century hydroponic food production plants have been built on the edge of the fen.

There are a number of small machine shops and fabricators in the south and east of the town. These include Pilbeam Racing, in Graham Hill Way, and Trackline International, manufacturers of 'crawler undercarriage systems'. There are also plants producing pre-prepared salads and vegetables for the supermarket trade. Bourne has two printing companies, and manufacturers of double glazing and fibreglass mouldings.

In the same area are distribution warehouses for a large brewer and general transport and storage companies, and a game merchant operates from one of the smaller factory estates.

Parts of the west of Bourne are drained by one of two Internal Drainage Boards, The Black Sluice IDB[3] and the Welland and Deepings IDB.[4]

Many houses in Bourne pay additional drainage rates to these authorities. Details of the designated flood risk areas can be found on a number of government web sites.[5][6]

Between the 9th and 20th centuries, Westfield was a set of three fields arranged as and used as an existing mediæval agricultural three-field system,[7] which was a form of crop rotation in use from the Middle Ages. It is this site which accounts for the name of the school. Aerial photograph shows cropmarks in a school playing field which may indicate the archaeological site of these three fields. The site is close to and associated with Car Dyke,[8][9] and this may imply a connection between the three-field system and the dyke, involving drainage, irrigation and transport of crops and materials.[10][11][12]

The historical association between Westfield and Car Dyke for crop and materials transport is a strong probability because droving roads and the later turnpikes were less viable than waterways until the A151 road was built.[13]

The Ancient Woodland of Bourne Woods, although much reduced, is still extant and originally formed part of the ancient Forest of Kesteven and is now managed by the Forestry Commission.

The earliest documentary reference to Brunna, a variant of the Old English burna ("brook"), is from a document of 960, and the town appears in the Domesday Book as Brune.

Bourne Abbey, (chartered in 1138), formerly held and maintained land in Bourne and other parishes. In later times this was known as the manor of 'Bourne Abbots'. Whether the canons knew that name is less clear. The estate was given by the Abbey's founder, Baldwin fitz Gilbert de Clare, son of Gilbert fitz Richard, and later benefactors. The abbey was established under the Arrouaisian order. Its fundamental rule was that of Augustine and as time went on, it came to be regarded as Augustinian. The Ormulum, an important later Old English Biblical gloss, was probably written in the abbey in around 1175.

Bourne Castle was built on land that is now the Wellhead Gardens in South Street.[14][15][16]

The Bourne Old Ea is a canal which connected the town to the sea in Roman times. The word "ea" is old English for "river", and is in the name of many fenland waterways. On occasion a later age has changed it to "eau", as if it is were French, and botht versions are seen in the name of the Bourne Old Ea. The name "Bourne-Morton Canal" is seen also.

Until the mid-19th century, the present Bourne Eau was capable of carrying commercial boat traffic from the Wash coast and Spalding. This resulted from the investment following the Bourne Navigation Act of 1780. Passage became impossible once the junction of the Eau and the River Glen was converted from gates to a sluice in 1860.

Bourne also hosts a number of other sporting clubs, particularly in the field of martial arts, and efforts to build a skate park continue. 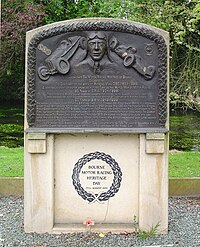 The former workshops are now occupied by a firm of auctioneers who use them as a saleroom, but the achievements of Raymond Mays and the motor racing connection with Bourne are remembered with a Memorial Room at the town's Heritage Centre (Baldock's Mill in South Street). One Sunday in August 1999 a collection of BRM cars paraded around the streets of the town watched by hundreds of spectators, and a memorial to the memory of Raymond Mays and the town's motor racing heritage was unveiled in South Street in 2003.

Bourne continues to be closely connected with the motorsport industry. In 1975, BRM's former Chief Designer, Mike Pilbeam, set up Pilbeam Racing Designs which is still based in the town. Pilbeam is particularly known for its successes in hillclimbing in the 1980s and early 1990s.

There are currently 71 listed buildings in the parish of Bourne, the most important being Bourne Abbey; the parish church of St Peter and St Paul (1138) which is the only one scheduled Grade I. The others are Grade II, the most colourful being the aptly named Red Hall

Red Hall (built around 1620) is finished in red brick with ashlar quoins, many gabled and featuring a fine Tuscan porch. From 1860 to 1959, it was the town's railway station booking office and waiting room. At two stages, in the 1890s and 1960s, it came close to demolition but the building is now well preserved by Bourne United Charities. The former station booking office serves as the BUC's office.

Baldock's Mill (1800), once a corn-grinding water mill, together with the miller's house, has been converted by Bourne Civic Society to serve as the town's Heritage Centre. It houses many interesting artefacts, most recently a water-wheel has been installed and a newly created replica of a Charles Frederick Worth dress is on display.

The Baptist Church building dates from 1835 but the church itself was established here in the 1640s. This building, the Methodist Church (1841) and the United Reformed Church (1846) are all still in active use. 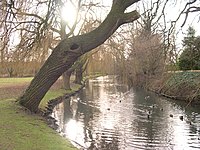