Sutton Bridge is a village in Lincolnshire, on the A17, 7 miles north of Wisbech and 9 miles west of King's Lynn. The village includes a commercial dock on the west bank of the River Nene over which spans a swing bridge, and the parish, two 19th century lighthouses 3 miles to the north from the village on the River Nene.

The village is close to the borders with Norfolk and Cambridgeshire, the parish boundary stretching out over the flat lands against them both.

Sutton Bridge and the surrounding area has recently seen an influx of new residents, mostly from the southern part of the United Kingdom. This has resulted in a healthy housing construction and improvement plan. In 1999, Sutton Bridge Power Station, a 790 MW gas-fired power station that feeds electricity into the National Grid was opened, it is situated on Centenary Way, close to the river Nene.

The early 19th century village consisted of a few farmhouses and cottages straggled along the track which passed for a main road. The parish church is dedicated to St Matthew, and is the only flint church in Lincolnshire.

Stretching to the east and north was a vast, fast flowing expanse of marshes known as Cross Keys Wash, through which the River Nene (earlier, the Wellstream) wound its way to the sea. The whole area is composed of sand and silt, shifting regularly as the water cut new channels. The track across the marshes between Lincolnshire and Norfolk was passable at low water and needed a guide for a safe passage. Livestock, travellers, wagons and coaches were lost into the quicksand of the marshes.

Since reclamation began in the 16th century of the estuary between Long Sutton and Sutton Bridge, The Wash House (now the Bridge Hotel) marked the start of the safe track and it was possible to hire guides to help the general travellers and also the drovers with their herds of cattle, flocks of sheep or geese safely over the marsh.

It was recorded by contemporary chroniclers that King John's crown jewels and other valuable crown possessions were lost in marshland when the horse-drawn baggage train of his army attempted to cross without a guide the causeway and ford across the mouth of the Wellstream[1] on 12 October 1216 in passing from Bishop's Lynn (now King's Lynn) by way of Wisbech on the way to Sleaford. On departing Bishop's Lynn, King John had apparently chosen the safer route through Wisbech in Cambridgeshire, which route was usable only at low tide. The horse-drawn wagons moved too slowly for the incoming tide or flood tide, and most were lost with only few men surviving. The King died a week later of dysentery and he was succeeded to the throne by his 9-year-old son, Henry III.

The location of the accident is usually supposed to be somewhere near Sutton Bridge, on the River Nene. The name of the river changed as a result of redirection of the Great Ouse during the 17th century, and Bishop's Lynn became King's Lynn as a result of Henry VIII's reformation of the English Church. Several commercial sponsored attempts have been made over the years using modern scientific equipment to discover the exact location of the loss in this area and retrieve the long lost treasures.

The first railway reached the village in 1862 with Sutton Bridge railway station. The actual operation of the railways caused problems when ships were using the river. With no radio communication between the two, news of the approaching ship depended on visual warning. 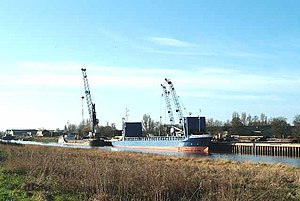 The Sutton Bridge Dock Act was passed in 1875. This authorised the construction of the dock and other necessary works, including connecting the dock to the existing railway. The wet dock was to be some 475 yards by 140 yards with a lock from the river of 200 feet by 50 feet. The length of the quayside was to be 1,250 yards with a long timber jetty on the east side. On the west side was to be a coal jetty, equipped with a hydraulic lift to raise coal trucks to tip their loads into ships waiting beneath.

The dock gates weighed 35 tons each and 1.5 million bricks were used in constructing the dock entrance. An area of 13 acres was taken up by the dock itself and 600,000 cubic yards of soil were excavated. The first sod was cut on 1 January 1878 and 100 men, 50 horses and carts, 1 steam dredger and several barges were involved in the work.

The work was completed and the first ship to enter the dock (SS Garland) did so on 14 May 1881, carrying 1200 tons of cargo destined for Messrs English of Wisbech. The excitement was spoilt somewhat as the dock entrance hadn't been dredged to a sufficient depth and the ship had to unload some of her cargo before entering the dock. However, towed by the tugs, Pendennis and the Isle of Ely, she floated into the dock. In the following week, four other ships used the dock.

The official opening was planned for 29 June with great public festivities, however on 9 June part of the ground at the south west corner of the lock sank 10 feet, leaving the concrete facing unsupported. At the same time, a strip of earth at the back of the lock on the north side sank, carrying with it, two steam traction engines which had been used for pumping. They were buried 10 feet deep in the silt. Frantic efforts were made to repair the damage. Trainloads of sand, silt, rubble, clay and limestone were poured into the gaps to no avail. On the following Tuesday 500 feet of concrete facing on the opposite, west side of the dock itself were dislodged because the footings had been scoured away. On Wednesday, many more yards of the concrete cracked and subsided. All three ships which had been in the dock had got away safely with some difficulty. The great weight of concrete laid on shifting silt, together with inadequate timber piling would appear to have led to the collapse. Efforts to save the dock were soon seen to be futile and the plan was abandoned. The railway company lost a fortune and Sutton Bridge's growth as a port was halted for over 100 years.

Sutton Bridge Golf Club, established in 1914, is a nine hole golf course located in and around the abandoned dock basin.

The modern Port Sutton Bridge opened in 1987.[2] It is a 62-acre dry cargo port and warehouse complex. The port provides a 1,148 feet long wharf accommodating between four and five vessels, with a maximum vessel length of 394 feet and 56 feet beam. Vessels up to 5000 DWT, with a draught of 20 feet can be accommodated at spring tide.[3] 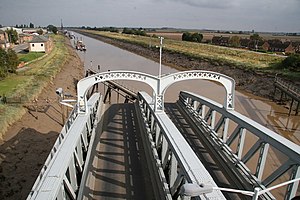 The swing bridge which spans the River Nene is a notable feature of the village and the current version, known as Crosskeys Bridge, was built in 1897 at a cost of £80,000 and is the third bridge to cross the river. The bridge was originally dual purpose, serving both road and rail traffic until 1959 when the railway closed.

The first bridge, opened in 1831, was designed by John Rennie the Younger and Thomas Telford as part of the Wash Embankment works. It was of a timber and cast iron construction and opened up rather like London's famous Tower Bridge. However it was eventually found to be awkwardly sited and in 1850, its replacement designed by Robert Stephenson was opened.

The position of the second bridge was approximately halfway between the original and the present day bridge. It was a swing bridge and was used only for road traffic until 1864 when the Midland Railway acquired powers to also use it for rail traffic. When the current bridge was constructed it was hoped that the 1850 bridge could be left in position for rail use but the river authorities decided that two bridges so close together constituted a hazard for shipping, and it was removed.

Twin lighthouses were built, on the banks of the mouth of the River Nene in 1831 to commemorate the opening of the Nene outfall cut. These were never functioning lighthouses and were merely markers to guide ships into the cut. Before the Second World War, the East Lighthouse was inhabited by the naturalist and artist Sir Peter Scott[4] who bought a large area of the Ouse Washes and established a nature reserve of what is now the Wildfowl and Wetlands Trust.

The village and community of Sutton Bridge played a supportive role of national importance during the Second World War; it was home to a Royal Air Force (RAF) airfield and Prisoner-of-war camp.[5][6][7][8] Its most pivotal role was when Sutton Bridge became the RAF's Central Gunnery School (CGS), training both fighter pilots from RAF Fighter Command and rear gunners from RAF Bomber Command, and in the words of Group Captain Allan Wright "the Central Gunnery School itself was the first of its kind in the world".[5][6][7]

On 1 September 1926 the Air Ministry established R.A.F. Practice Camp Sutton Bridge[9] on acquired farmland bordering Sutton Bridge village, adjacent the River Nene, in close vicinity to Crosskeys Bridge.[5][6][7] As a gunnery training camp, it was to operate ground and towed targets for live practice machine gun fire and bomb dropping by aircraft, its principal gunnery range was located along the Lincolnshire coast marshland on The Wash around 8 miles North-Northeast of Holbeach.[5][6][7][10][11] Becoming well established and expanded, R.A.F. Practice Camp Sutton Bridge was renamed to No. 3 Armament Training Camp Sutton Bridge[12] and later simply RAF Sutton Bridge.[5][6][7] In October 1939 No. 266 Squadron RAF was reformed at RAF Sutton Bridge as a fighter squadron operating the Fairey Battle light bomber aircraft before taking delivery of the Supermarine Spitfire in January 1940, becoming the RAF's second Spitfire fighter Squadron after RAF Duxford's No. 19 Squadron RAF.[5][6][7] 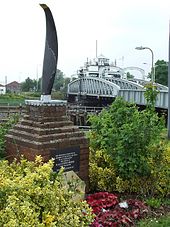 RAF Sutton Bridge memorial, at side of Crosskeys Bridge

Today, small remnants of RAF Sutton Bridge airfield exist, in 1958 RAF Sutton Bridge was closed, its land site transferred to the Ministry of Agriculture and continues to be used by the Potato Marketing Board as one of the UK's leading agricultural experiment stations.[5][17]

In 1947, a memorial in Saint Matthew's church was dedicated in memory of Commonwealth and Allied airmen who gave their lives whilst serving at RAF Sutton Bridge. The church also includes a Roll of Honour as well as a war grave cemetery. A memorial plinth-mounted propeller blade situated at the side of Crosskeys Bridge was also erected in 1993 in memory of all that served at RAF Sutton Bridge; the propeller blade came from a crashed Hawker Hurricane that was based at RAF Sutton Bridge. The marshland gunnery range itself, located along The Wash, survived as RAF Holbeach Bombing Range becoming parented to RAF Marham, it continues active service as a practice bombing range for the RAF as well as NATO-allied air forces.[18]

During the early part of 1943 Sutton Bridge and Crosskeys Bridge was used by 617 Squadron from RAF Scampton to practice their low-level flying needed for Operation Chastise (the legendary Dam Busters raid). The mission was led by commanding officer Guy Gibson, who was familiar with the village of Sutton Bridge having participated in advanced training at RAF Sutton Bridge during the summer of 1937.[19]

RAF Sergeant George (Johnny) Johnson DFM,[20] Bomb-Aimer on board Lancaster bomber ED825/AJ-T commanded by Joe McCarthy that attacked the Sorpe Dam from a height of just 30 feet, recounts that in the village of Sutton Bridge there were electric cables that cross the River Nene just before the bridge itself and to hone their low-level flying skills they would regularly practice flying the Lancasters onto the electric cables and skim up over Crosskeys Bridge, missing the bridge itself by only a few feet each time.[19]