Woodhall Spa is a village in Lincolnshire within a wooded area on the southern edge of the Lincolnshire Wolds, about six miles southwest of Horncastle and about fifteen miles east of Lincoln. The village is noted for its mineral springs (from which the village took the suffix to its name), cinema (The Kinema in the Woods), and its Second World War association with the RAF 617 Squadron. The cinema has the last remaining rear screen projector in the country.

The development of the spa

Woodhall Spa came about by accident in 1811 after John Parkinson, of Old Bolingbroke made several attempts to find coal. After spending several thousand pounds, and sinking a shaft over 1,000 feet deep, the enterprise was abandoned on account of the now rising spring.[1][2] The spring flows continuously through soft spongy rock, at a depth of 520 feet.[3]

About 1834, the then Lord of the Manor, Thomas Hotchkin, ascertained by analysis that the water was in fact valuable, being an iodine and bromine containing mineral spring.[4] He spent nearly £30,000 sinking the well and erecting the Spa Baths and the Victoria Hotel.[5]

The Victoria Hotel burned down on Easter Day, 4 April 1920 when an electrical fault in the boiler room spread to the linen room above.[6] The Spa Baths finally closed when the well collapsed in 1983.

Other hotels which sprang up due to Woodhall Spa's popularity included: 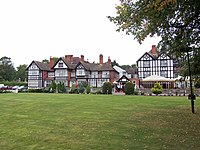 The heyday of Woodhall Spa was recorded by a local photographer, John Wield, and many of his photographs are displayed in the Woodhall Spa Cottage Museum, which was his home.[8][10]

Much of the village's |Victorian elegance remains, and since January 1991 it has been a designated conservation area.

The Great Northern Railway company built a branch line from their Peterborough – Lincoln line to Horncastle, with a station at Woodhall Spa railway station, opened on 11 August 1855.[11]

The railways brought increasing popularity; and an elegant spa town with hotels and guest houses on wide tree-lined avenues, largely designed by Richard Adolphus Came, grew up around the original facilities. He stated in his designs that none of the roads shall be "streets", which is still true today; and the roads built since have also been lined with various trees. In 1886 the estate was purchased by a syndicate and extensive alterations and improvements were made.[1] The Victoria Hotel and the Spa Baths were greatly modified by the Syndicate, a group of investors including Lord Alverstone, Lord Iddesleigh, and Edward Stanhope MP in 1887.

Woodhall and Woodhall Spa stations closed along with the rest of the Boston to Lincoln line in 1971 and demolition came soon afterwards.[11]

In the Second World War Woodhall Spa's two main hotels, The Golf Hotel and The Petwood Hotel, were requisitioned for the RAF, and Pinewoods used to hide military equipment, especially on its northern perimeter. RAF Woodhall Spa airfield was built to the south of the village[12] in the parish of Tattershall Thorpe. It closed for operational purposes in 1964, although it is still owned by the Ministry of Defence, used mainly for jet engine maintenance and testing, and is operated as a satellite unit of nearby RAF Coningsby.[13][14]

A memorial wall depicting the breaching of the German dams in Operation Chastise, otherwise known as the "Dam Busters" raid, stands at the crossroads in the centre of the village. It is dedicated to the memory of those from 617 Squadron who were lost during the night of 16–17 May 1943.[15]

The memorial is the location of a local school choir photograph, published in Lincolnshire Life magazine, which included a black Labrador dog; the photo-caption asks if this "mysterious" animal was Guy Gibson's dog, which was run over and killed shortly before Gibson departed to bomb German dams.[15]

The Manor House in Woodhall Spa appears to have been built in the 18th century.[16] In the first half of the 19th century it was known as Woodhall Lodge or simply The Lodge. It was occupied by several generations of the Hotchkin family, originally from Rutland. Thomas Hotchkin (1774–1843) died there in June 1843 (Stamford Mercury, 9 June 1843). In 1861 it was in the possession of his grandson Thomas John Stafford Hotchkin.[17] By the 1880s it had become known as The Manor House, and Thomas John Stafford Hotchkin lived there until he died in 1891. His widow Mary moved into a purpose-built Dower House in 1906 enabling son Stafford Vere Hotchkin and his new wife to move into the Manor House. Stafford Hotchkin's son Neil sold the property in 1965 to the National Farmers Union, who sold it in 1992.[18] It housed a number of different offices until 2011, after which it became empty. In 2013 it was restored for use as a hotel. 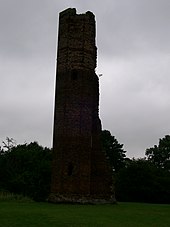 The Tower-on-the-Moor, a four-storey high red brick-built tower, is the stair turret of what is believed to have been a hunting lodge built in the mid 15th century for Ralph de Cromwell, 3rd Baron Cromwell whose fortified house, Tattershall Castle, was located four miles to the south.[19] It is a Grade II Listed Building,[19] and a scheduled Ancient Monument.[20] Documentary sources indicate that the tower was partly dismantled in the latter part of the 15th century when bricks from the Tower on the Moor were used for repairs at Tattershall Castle.[21][22] One of the older local roads in Woodhall Spa, Tor-O-Moor Road is named after the tower.

The Kinema in the Woods 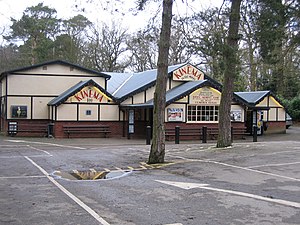 The Kinema in the Woods

The Kinema in the Woods is located at the centre of the Pinewoods next to the now derelict Spa Baths and opposite the site of the former Victoria Hotel. Housed in a converted cricket pavilion, when it opened in 1922 it was one of the first cinemas in Britain. It is one of the few cinemas in the country that still employs back projection[23][24] and also offers regular entertainment on an original Compton Captain Organ.

In December 2010 East Lindsey Council sold Jubilee Park to the Woodhall Spa residents for £1.[25] It is currently undergoing renovations.[26]

Several footpaths run through the parish, including:

St Peter's Church was built in 1893[27] although it was not until 1915 that it was legally designated the parish church.[27] Until then the little church of Saint Andrews, built in 1846,[28] was the parish church, but was too small for the rapidly growing town.[27]