Mablethorpe is a small seaside town in Lincolnshire, on the North Sea coast of Lindsey – the northern part of the county. To the north is Theddlethorpe St Helen.

It is the eastern terminus of the A52, though Mablethorpe is best accessed by way of the A1104 and A16 through Alford. It lost its railway station to the Beeching Axe.

Mablethorpe Hall is to the west of the town along Alford Road, near the parish church, St Mary's.

Mablethorpe as a town has existed for many centuries, although part of it was lost to the sea in the 1540s. For example, records of the Fitzwilliam family of Mablethorpe Hall date back to the 14th century. In the 19th century it was also a centre for ship breaking during the winter.

In 1953, Mablethorpe was hit by the disastrous East Coast floods.

In 1883 the first lifeboat station was built in Mablethorpe. The station ran until the First World War when it temporarily closed because of crew shortages. After the war the station was closed permanently due to a continuing shortage of crew. The station remained closed until 1965, when an inshore lifeboat (ILB) station was established.

In 1998, a bronze medal was awarded to the Helmsman for a service on 12 April, when the D class lifeboat rescued the crew of two and saved the fishing vessel Lark. The fishing vessel had broken down in the surf and was drifting helplessly towards the shore, having lost her anchor.

The lifeboat was launched in a force 7 gale and a heavy swell – extreme conditions for this class of lifeboat. The helmsman had considerable difficulty in negotiating the rough seas in order to reach the fishing boat. He decided that it was too hazardous to take off the crew and passed a line and towed her away from danger – a considerable feat in the huge seas for a lifeboat smaller than the fishing boat and powered by one 40 hp outboard engine.

The A157 from Mablethorne to Louth is reportedly "the sixth bendiest road in the United Kingdom.[1]

Alfred Lord Tennyson, one of Britain's most popular poets regularly the town in the 19th century. Some parts of the town are named after Lord Tennyson (for example, Tennyson Road, and Tennyson High School).

In the D H Lawrence novel, Sons and Lovers, published in 1913, Mablethorpe is the destination for the Morel family's first holiday. "At last they got an answer from Mablethorpe, a cottage such as they wished for thirty shillings a week. There was immense jubilation. Paul was wild with joy for his mother's sake. She would have a real holiday now. He and she sat at evening picturing what it would be like. Annie came in, and Leonard, and Alice, and Kitty. There was wild rejoicing and anticipation. Paul told Miriam. She seemed to brood with joy over it. But the Morel's house rang with excitement."

Mablethorpe is the setting for the adventures of B P Perry's fictional detective, Snake Wolfbane. The series begins with The Mablethorpe Connection.[2]

One of Mablethorpe's long-standing traditions, its sand train, operates to take visitors to and from the northerly point of the beach.

The Dunes leisure complex lies on Mablethorpe's seafront. In 2008, the old Dunes Theatre became Sharky's Bar following a refit, however in 2012 the complex was returned to its original state and branding.

Mablethorpe has long been known for its traditional seaside amusement arcades.

In May 2008, a skatepark was opened in the town. Situated on the seafront, the park is host to a small funbox, a spine and two quarter pipes.

Just over a mile northeast of the town, near the Seal Sanctuary, lies Theddlethorpe Gas Terminal, which supplies five percent of the United Kingdom's gas. To the west is the Bambers wind farm, which opened in November 2004 and houses 8 turbines - producing five megawatts of energy. The Bambers II windfarm, an extension of the first, opened in November 2006, and produces an additional five megawatts of energy. The two turbines at Mablethorpe wind farm, which produce 1.2 megawatts, were the first wind turbines in Lincolnshire when they were built in July 2002. All three are owned by Ecotricity, and are situated at the corner of West Bank and the Trusthorpe Drains. Mablethorpe's Star of the East is on the seafront. 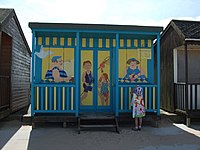 Mablethorpe hosts Britain's only beach hut festival, Bathing Beauties, in September each year. Owners of private beach huts compete in exterior design, amidst a backdrop of poetry, music, and drama.[3]

The Mablethorpe Marathon was launched in 2006 and attracted around 2,500 runners in its first year. The event has remained popular since its conception.

For over forty years, Mablethorpe has hosted motorcycle sand racing each winter and spring. This has inspired the Mablethorpe Motorcycle Festival, which launched in 2010, and which takes place yearly.