Spalding is a market town on the River Welland in Holland, Lincolnshire. It has a recorded population of 28,722 as at the 2011 census. Little London is a hamlet directly south of Spalding on the B1172, whilst Pinchbeck, a village to the north, is part of the metropolitan area.

Spalding is well known for its annual 'Flower Parade' which attracts many regular visitors from all over the world. The parade celebrates the regions vast tulip production and the link between the fens and the landscape of Holland. [1] Since 2002 it has also held an annual Pumpkin Festival in October to celebrate its produce.[2]

Excavations at Wygate Park in Spalding have shown that there has been occupation in this area from at least the Roman period, when this part of Lincolnshire was used for the production of salt to which it was suited, being a coastal siltland. At Wygate Park salt making seems to have come to an end by the mid-3rd century AD however, climatic change and flooding may have made such activities difficult, causing it to die out.[3]

The town's name is derived from an Anglian tribe, the Spaldingas, who settled in the area during the 6th century, and may have retained their administrative independence within the Kingdom of the Mercians into the late 9th century, for their name is recorded in the Mercian record known as the Tribal Hidage.

In John Bartholomew's Gazetteer of the British Isles (1887), Spalding was described as a:

market town and par. with ry. sta., Lincolnshire, on River Welland, 14 m. SW. of Boston, 12,070 ac., pop. 9260; P.O., T.O., three Banks, two newspapers. Market-day, Tuesday. Spalding is an important railway centre, while the river has been made navigable to the town for vessels of from 50 to 70 tons. It is situated in a rich agricultural district, and has a large trade, by river and by rail, in corn, wool, coal, and timber. It has also flour, bone, and saw mills, breweries, and coach works. There are remains of a priory of 1501, a fine old church (restored 1860), a grammar school, a corn exchange, and a spacious market place.[4]

Draining of the Fens 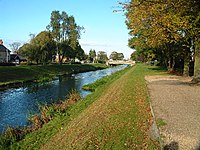 The River Welland flows north from Crowland, through Spalding and passing the village and port of Fosdyke before leading out to the Wash, bisecting Spalding from east to west; the town has developed as a linear settlement around the river. Land had been reclaimed from the wetlands in the area since mediæval times, and Spalding was subject to frequent flooding. The Coronation Channel, opened in 1953, diverted the excess waters around Spalding and ended the flooding,[5] allowing the area around the banks to be safely built upon. Although this area has become heavily built up, the river retains its recreational usage and fishing is still popular. 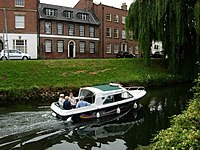 In July 2005 a "Spalding Water Taxi" service was launched, running from Easter to late October. Its route is from just off Spalding's High Street (behind Hills Department Store), upstream along the river, turning onto the Coronation Channel, and going to Springfields Outlet Shopping & Festival Gardens, and back. It is mainly used as a recreational tourist attraction, described as "a relaxing 30 minute cruise".[6]

Around the north-west of Spalding is a large waterway called Vernatt's Drain, named after one of the adventurers who drained the fens. Philibert Vernatti was made a baronet on 7 June 1643.

A nature reserve is situated on part of the old Boston railway line at Vernatts Drain.

Fulney Lock is the point where the Welland is no longer tidal.[7]

Spalding falls within the drainage area of the Welland and Deepings Internal Drainage Board.[8]

The town has a population of about 22,000 (26,000 including the large village of Pinchbeck, to the north). The population is growing fast, due in great part to many retired folk coming to the area but more particularly foreign migrant workers from eastern Europe working in the many food processing factories or on the land.

Spalding is located at the centre of a major region of flower]] and vegetable growth, due to the rich silty soil which mainly comprises drained recovered marshland or estuary. There are many garden centres and plant nurseries, as well as a thriving agricultural industry and various vegetable packing plants. The main vegetables are potatoes, peas, carrots, wheat, barley, oats, broccoli, spinach, lettuce, cabbage, kale and Brussels sprouts. The vast majority of these are sold to large concerns such as supermarkets, with little being available for sale locally.

Despite this, local fruit and vegetable shop Booth's sells lots of local produce to Spalding's citizens. They sell all major fruit and vegetables ranging from the famous, locally grown 'Boston' potatoes to imported rarities such as custard apples.

Known as The Heart of the Fens, Spalding is famous as a centre of the bulb industry, and has close links with the Netherlands (origin of the Geest family, who were former major local employers). The annual Tulip Parade takes place on the first Saturday in May, and is a major tourist attraction, comprising a procession of Float (parade)|floats on various themes, each decorated with tulip petals, a by-product of the bulb industry. In years when the tulips are late, daffodils or hyacinths are sometimes used in their place. When the tulips are early, crepe paper has to be substituted. The flower industry has, however, become less important in recent years, and the bands of bright colours that covered the fenland are now essentially gone.

Spalding is one of the homes of the Lincolnshire sausage, the key ingredient of which is sage.

Spalding was chosen to host the World Tulip Summit in 2008, from Thursday, 1 May to Friday, 2 May, alongside a broader Tulipmania festival from 13 April to 24 May. This coincided with the date of the Flower Parade (Saturday, 3 May), which was the fiftieth anniversary of the parade. The Summit was estimated to attract about 200 delegates from around the world.

Accompanying the Summit and Festival were many entertainment activities, all with a general focus on promoting the local area.

Spalding has a popular, reasonably-sized, market every Tuesday and Saturday and on the first Saturday in every month a Farmers' Market.

Landmarks and about the town 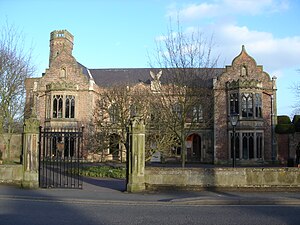 The best-known building in Spalding is Ayscoughfee Hall, a 15th-century country house which is now a museum. Other local attractions are the Pinchbeck Engine Museum (just north of Spalding), the Bulb Museum (situated at Birch Grove Garden Centre, Pinchbeck) and the Gordon Boswell Romany Museum, to the south of the town.

Chain Bridge Forge is a 19th-century blacksmith's forge on the River Welland which has retained many of its original features, and is now a museum.

Spalding and the surrounding area is noted for its parish churches. St Paul's at Fulney, on the eastern side of the town, was designed by Sir George Gilbert Scott, the designer of St Pancras Station, London, who was a friend of Spalding Gentlemen's Society. St John's, the parish church of John the Baptist|St John the Baptist, was built at the same time as the adjacent Church school in in 1875. Spalding parish church itself (St Mary and St Nicolas, Spalding), has a spire visible for miles around and dates from the 13th century.

The Chatterton Tower is noteworthy.

Several supermarkets are available to local folk. Outside of the town centre, Springfields Shopping Outlet and Gardens offer a wide range of outlet stores set in a variety of landscaped gardens designed by Charlie Dimmock and Chris Beardshaw among others.[9] The Castle Sports Complex provides fitness facilities throughout the day and evening. The South Holland Centre is an arts centre on Market Place that stages concerts, theatre productions and film showings.

A new £425 million, 860 MW combined cycle gas turbine power station, owned by Intergen, was built on the former site of British Sugar on West Marsh Road by Bechtel in October 2004. Intergen have also consent to build a second 900 MW expansion to its existing power station on which building work began in 2011. In mid-2006 a new wind farm (operated by Wind Prospect UK) became visible from much of Spalding, located in nearby Deeping St Nicholas. 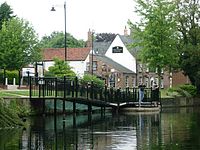 The Lincolnshire Poacher pub and the terminus of the water taxi

Spalding, like nearby Boston, is a regular destination of heavy goods vehicles transporting processed vegetables and other food produce. The A16 now bypasses the town.

Spalding railway station is on the Lincoln Central - Peterborough railway line. The section of the Great Northern & Great Eastern 'Joint' line from March, which carried the 'Boat Train' between Harwich and Sheffield, closed in 1982 and the trackbed has largely built over at the south of the town for housing. Spalding was also on the east-west Midland and Great Northern Joint Railway, which closed in February 1959. Local freight, mainly farm produce, continued to carried between Bourne and Sutton Bridge until 1964.

Spalding has its very own local radio station, Tulip Radio broadcasting on 107.5FM.