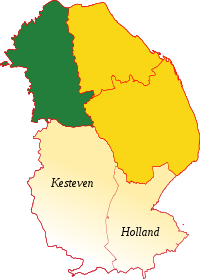 The West Riding of Lindsey, within Lincolnshire

The West Riding of Lindsey is a division of the Lindsey part of Lincolnshire. It consists of the north-western part of the county, and includes the Isle of Axholme (which forms the western division of Manley Wapentake) and the following hundreds:

The administrative centre of the riding was Kirton-in-Lindsey. It is the most populous of the ridings, with a population of 242,172 as of the 2011 census. It covers an area of 461 square miles.