Cleethorpes is a seaside resort town in Lincolnshire, in Lindsey and standing on the Humber estuary. It had a population of 31,853 in 2001, a number swollen in the holiday season.

The town consists of three former villages, the Clee Thorpes, but now not only they are joined by Cleehtorpes is physically linked to the neighbouring town of Grimsby. Between the two towns are the villages of Old Clee and Weelsby, now somewhat overwhelmed by the spead of houses.

Industry appears to dominate the Humber’s shores, but Cleethorpes remains primarily a place for peaceful holidays; a seaside resort not technically on the open sea but on a river broad enough to be so.

The name “Cleethorpes” is a relatively modern one. Before becoming a unified town, Cleethorpes was made up of three small villages: Itterby, Oole and Thrunscoe, which were part of a wider parish called Clee (not to be confused with Old Clee). The name of the town comes from the parish: it is the Clee thorpes; “thorpe” being a village (a word found in both Old English and Old Norse).

The name of the Parish of Clee is thought to come from a local word for clay.[1]

Local residents from the Humber area affectionately refer to Cleethorpes as Meggies but it seems very unclear where the name comes from. Some say that the top of Isaac's Hill used to be called Meg's Island, while others say a meggie (an old slang word for a guinea or any coin)[2] was the cost of a tram fare from Grimsby to the resort. The term is used in Grimsby to refer to the town itself, as well as its inhabitants. Cleethorpes can also be known as "down beach".

The manor of Itterby was purchased in 1616 by the trustees of Peter Blundell's charity for the benefit of scholars and fellows at Sidney Sussex College, Cambridge from Blundell's School, Tiverton.[3] This is reflected in many of the street and park names in the area.

Cleethorpes developed as a fishing village. By the time of the 1801 census the population was 284.[4]

The 1820s saw the first developments of Cleethorpes as a health holiday resort, with sea-bathing and the taking of medicinal waters becoming fashionable. By 1831 the population had increased to 497.[4]

In 1842 the Cleethorpes Enclosure Bill was enacted and 2,050 acres of land were divided between landowners and eight new roads developed.[5] In 1848 Cleethorpes was described as:

...much resorted to as a bathing-place, for which it is highly eligible; the air is pure, the scenery good and besides a few lodging-houses and smaller inns, there is a large hotel, built some years since, on an eminence embracing extensive views of the sea, the Humber, and the Yorkshire coast. Many of the population are employed in the oyster-fisheries."[6]

The resort expanded after the railway linked it to the industrial towns of Yorkshire. Cleethorpes Pier opened in 1873, and the promenade in 1885.[5]

The parish church is St Peter's, built in 1866. Churches in the town include:

Broad view of the Cleethorpes seafront

A seaside resort, on the Humber estuary, close to the open North Sea but somewhat protected from its worst ravages, Cleethorpes has a popular beach. Bathers are separated from the open sea by several hundred yards of mud at low tide.

The sea front provides views of shipping traffic entering and leaving the Humber for the ports of Grimsby, Immingham, Hull and Goole.

Two large fortifications, the Humber Forts, are visible in the mouth of the river. On a clear day, the lighthouse situated on Spurn Point can be seen with the naked eye from the North Beach.

There is a Royal National Lifeboat Institution station, which is near the pier and next to the Coastguard on Central Promenade. A new and larger RNLI station is planned. Cleethorpes Rescue also protect the beach.

Cleethorpes has a large boating lake with many varieties of ducks, swans and geese. To the south of the resort near Humberston is a yacht club.

Ross Castle, a mock ruin of a castle built in 1863 by the Manchester, Sheffield and Lincolnshire Railway, was named after Ernest Ross, secretary of the railway company.[5] Its height was the highest point on the cliffs. After a period of closure, the castle was renovated, re-opening in June 2008 to the public. Possibilities of a further closure have been raised after a woman fell to her death on 9 January 2009.[7]

A statue of The Boy with the Leaking Boot was given to the town in 1918 by John Carlborn. It is reported that he was a Swedish immigrant to Cleethorpes who had built up a successful shipping business, and that the statue was a copy of one in the Hasselbacken Restaurant in Stockholm, Sweden.[8] The Cleethorpes statue stood in the Pier Gardens but is now in the town hall, with a replica on display in the Tourist Information Office. The statue is now on display on the sea front close to the leisure centre. A nearby public house, The Leaking Boot, was destroyed by fire in June 2009.[9] 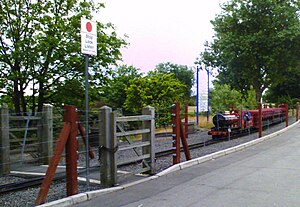 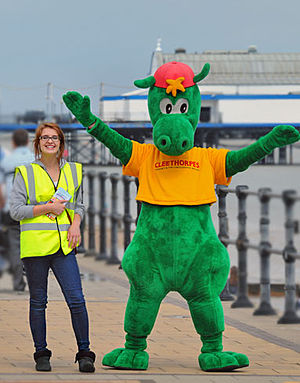 Floyd the Dragon - The Cleethorpes mascot