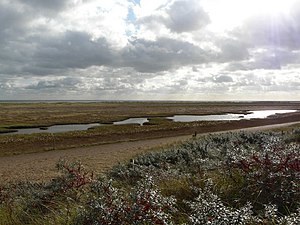 Gibraltar Point is a headland on the coast of Lincolnshire, marking the point where the coast turns from running northeast along the edge of the Wash to running north against the North Sea, and it therefore marks the end of the Wash.

The coastlands of Gibraltar Point have been designated a national nature reserve, which reserve covers approximately two square miles.

Gibraltar Point is part of the twice daily inshore waters forecast in the extended form of the Shipping Forecast broadcast on BBC Radio 4.

The Gibraltar Point National Nature Reserve is owned by the two local councils and is administered by the Lincolnshire Wildlife Trust. The reserve comprises two parallel ridges of sand dunes—the "east dunes" and the "west dunes"—separated by approximately 500 yards of salt marsh; and an area on the seaward side with further salt marsh and sand, shingle and muddy beaches. The reserve extends for a distance of about three miles along the coast, from the southern end of Skegness to the Gibraltar Point itself, at the northern corner of the Wash.

A golf course occupies much of the west dunes (the inland side) at the Skegness end of the area. Gibraltar Point is an area of coastal deposition—at the end of the 18th century the west dunes were by the shore, but they are now half a mile inland.

In 2006 a new Visitors' Centre opened at the southern end of the reserve, containing the 'Wild Coast Exhibition' about the habitats and wildlife of Gibraltar Point including 3D models of sand dunes and salt marshes. The Nature Discovery Room has interactive displays and marine tanks containing animals found in the sea off the Lincolnshire coast.

Next to the Visitors' Centre stands the old coastguard house and look-out is The Wash Study Centre; this has residential accommodation, a laboratory, classroom and a library. The centre is open to groups from schools, youth groups, colleges, universities, natural history societies and similar organisations.

There are numerous paths around the area, and several artificial lakes and hides. The Lincolnshire Wildlife Trust also owns an old farm and land just inshore of the west dunes at the southern end of the reserve, again with an artificial lake and hides.

The reserve's importance is recognised by its various designations:

The reserve is home to a great variety of birdlife, mostly wildfowl, waders and gulls. Unusual migrants are frequently seen, and birds commonly found at the site include: