Harlaxton Manor, built in 1837, is a manor house at Harlaxton in Lincolnshire. Its architecture, which combines elements of Jacobean and Elizabethan styles with symmetrical Baroque massing, renders the mansion unique among surviving Jacobethan manors.

The manor is a popular location for filming both exterior and interior shots. The manor currently serves as British campus of an American private university, the University of Evansville. 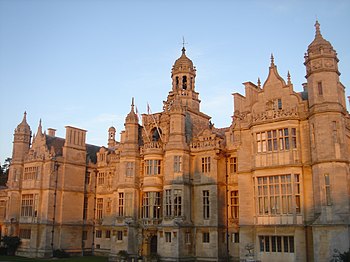 Harlaxton is first recorded in the Domesday Book of 1086 as Harleston.

The current mansion is the second Harlaxton Manor. The first was built on a different site during the 14th century and was used as a hunting lodge by John of Gaunt. By 1619, Sir Daniel de Ligne purchased the manor.[1] The original house was deserted after 1780; it was inherited by Gregory Gregory, and was torn down in 1857.

The current house was built by Gregory from 1837 to 1845 and helped usher in a renaissance of Elizabethan architecture. The original architect, Anthony Salvin, was replaced by William Burn, who is responsible for its interior detailing. Upon Gregory's death, the manor passed to his cousin George Gregory and then in 1860 to a distant relative, John Sherwin-Gregory. Upon the death of Sherwin's wife in 1892, it passed to his godson Thomas Pearson-Gregory, who allowed it to fall into disrepair.

The manor passed through several sets of disparate hands in the twentieth century. Abandoned by 1935, it was purchased two years later by Violet Van der Elst, a businesswoman and inventor, who made her money from developing the first brushless shaving cream and made her name by campaigning against capital punishment. She restored the house and arranged for it to be wired for electricity. During Second World War it was requisitioned by the Royal Air Force as the officers' mess for RAF Harlaxton and later to house a company of the 1st Airborne Division. In 1948, Harlaxton was purchased by Jesuits, who used it as a novitiate, but they in turn sold the manor, while retaining rights to some of the lands, to Stanford University, and American university, in 1965. The University of Evansville began using the property in 1971 as its British campus (it was owned by William Ridgway, a trustee of the university, until 1986). Immediately after the purchase, the University of Evansville began renovating the entire facility.

Since 1984 Harlaxton Manor has also been the site of the annual Harlaxton Symposium, an interdisciplinary symposium on mediæval art, literature, and architecture.[2]

Exterior and interior shots have been featured in many films including:

The building was used as a site in the reality television series Australian Princess.