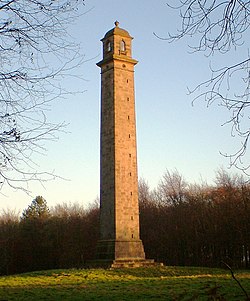 Pelham's Pillar is a monument on a hill near Caistor in Lincolnshire, dedicated to the memory of Charles Anderson-Pelham, 1st Earl of Yarborough, who died in 1846.

The Pillar stands on part of the Yarborough estate at Brocklesby, and is a viewing tower built to enable the earls to view the estate. It is 128 feet high and is guarded by two stone lions at the door. It is said that, when it was built, everything that could be seen from the top belonged to Charles Anderson-Pelham