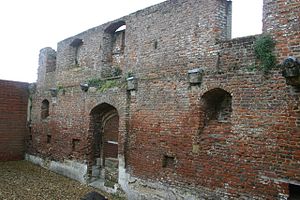 The remains of the college

Tattershall College was a grammar school in Tattershall in Lincolnshire, now in ruins.

The college was established in 1439 and the building which may be seen visible today was constructed between 1454 and 1460. This building was built by the Ralph, 3rd Baron Cromwell for the education of the church choristers and was once a splendid example of the perpendicular style of Gothic architecture. Although the school was formally dissolved in 1545, it is thought that teaching may have continued for some years afterwards.

In the late 18th century, the building was converted into a brewery before being left empty and allowed to deteriorate into the ruin that it now is with those walls that remain standing shored up by modern brick.English Heritage now owns it but Heritage Lincolnshire manages the site.