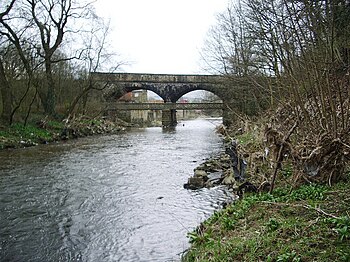 The River Calder flowing through Lancashire is a major tributary of the River Ribble.

Having swallowed the Brun in Burnley, the Calder flows north through the site of Burnley College and out of the town, where it is joined by the Pendle Water before turning west past Ightenhill and Gawthorpe Hall and through the town of Padiham.