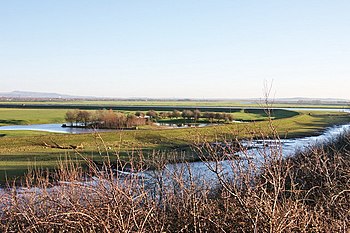 The Fylde is a coastal plain in western Lancashire, the bulge of the middle of the county between the River Ribble and Morecambe Bay.

The Fylde may reckoned at about 13-miles long and wide, a square-shaped peninsula, bounded by to the north, the Ribble estuary to the south, the Irish Sea to the west, and the hills of the Forest of Bowland hills to the east. The eastern boundary is approximately the dale in which the M6 motorway runs.

The Fylde apparently takes its name from the Old Norse language, meaning "Field", although Old English had a similar word too. It is a descriptive name; the Fylde is a flat, alluvial plain; parts were once dug for peat. Today's Fylde has several large towns, in particular the coastal towns, up to Blackpool's long strip of seaside resorts.

Another name for the Fylde has been Amounderness, which as a hundred is somewhat broader, and the Fylde forms the western part of that hundred.

The west coast of the Fylde is almost entirely urban, containing the towns of Fleetwood, Cleveleys, Blackpool and Lytham St Annes, with Thornton, Carleton and Poulton-le-Fylde not far inland. This area forms the "Blackpool Urban Area", all joined together along the coast.

The central southern part of the Fylde includes the smaller towns of Kirkham and Wesham. The rest of the Fylde is rural, containing villages that include Freckleton, Warton, Wrea Green, Great Eccleston, Hambleton, Knott End and Pilling.

The River Wyre meanders across the Fylde from Garstang on the eastern edge, westwards towards Poulton and then northwards to the sea at Fleetwood. The area north and east of the tidal Wyre, known as Over Wyre, is the more rural side of the river. The Fylde is roughly trisected by the M55 motorway and A586 road.