Kirkham (originally Kirkham-in-Amounderness) is a small town in Lancashire, on the Fylde midway between Blackpool and Preston (11 miles west of Preston) and adjacent to the village of Wesham. It owes its existence to Carr Hill upon which it was built and which was the location of a Roman fort.[1] It had a population of 7,127 recorded in 2001.

In his 1878 History of the Fylde of Lancashire, John Porter described Kirkham as "probably the earliest inhabited locality in the Fylde district."[2] Remains found at Carleton in the 1970s of an elk with two harpoons embedded suggest that the Fylde was inhabited as long ago as 8,000 BC.[3]

Kirkham is on the Roman road between Ribchester (‘’Bremetennacum’’) and the River Wyre.

The town’s name is from the Northumbrian English or Danish kirk (church) and -ham ("home" or homestead). It appears in the Domesday Book of 1086 under the name of Chicheham. The town's market charter was granted in 1269–70 by King Henry III.[4]

In the 15th and 16th centuries Kirkham remained a small market town. But from the late 17th century the town into a thriving textile centre. From 1830 sailcloth was being woven in cottages in the town and later at the Flax Mill, built in 1861 by John Birley.

In 1792 a Roman brass shield boss was discovered by local schoolmaster John Willacy, in the Dow Brook, in Mill Hill Field. Willacy sold the shield to a Scotsman but it found its way to the Charles Townley collection in Burnley and from there to the British Museum. The oval shield, about 8 inches in diameter, bore the representation of a human figure, seated, with an eagle to the left and an athlete at the sides.[2][3]

In 1887 a memorial was erected, at Town End, to commemorate the Golden Jubilee of Queen Victoria. The memorial was later moved to a site adjacent to the United Reformed Church.

Looms ran in the town from about 1850 until 2003. At one time the town had eleven mills, the last to be built being Progress Mill in 1915. On the lower part of Station Road "The Last Loom" of Kirkham is on permanent display. The loom is a crossrod loom from the 1920s which, with the use of tappets at the side, could produce an extensive range of fabrics including velvets, twills and Bedford cord.

In 1925 L S Lowry, the Salford artist, made a pencil-on-paper drawing of Church Street.[5] In his later "A Lancashire Village, 1935" he painted the scene again, but with a wider street full of people and a house in front of the church.[6]

The Church of England parish church is St Michael's. Its ancient predecessor gave a name to the village; “church homestead”.

Zion (Independent) Chapel was founded in 1818. Although the church has long since been demolished, the graveyard remains. Now associated with Kirkham United Reformed Church, but adjacent to the Manse Nursing Home in the centre of the town, this unusual isolated burial-ground is still well maintained. 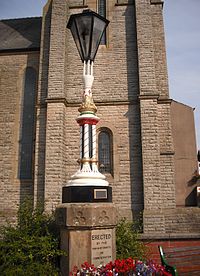 Kirkham lies at the centre of a relatively rich agricultural area. By the mid 18th century, however, the manufacture of sail cloth and the flax-weaving industry had become well established in the town. By 1876 there were several factories employing almost 1,000 workers in the cotton and other industries and by the end of the century the town had grown considerably in importance.

Kirkham and Wesham railway station was opened in 1840 as "Kirkham Station", when the Preston and Wyre Railway and Harbour Company opened its line to Fleetwood. South of the town is Kirkham Prison, an open prison built on part of the site of the Royal Air Force base which closed in 1957.

The small library, which the town has enjoyed since 1939,[7] recently reopened following a major refurbishment.[8]

The town has been visited by a number of well-known authors who have performed book-signings at one of the town's two book shops. These have included Ranulph Fiennes, Michael Parkinson, Stacey Solomon, Michael Caine, Joanne Harris, The Wanted, Jacqueline Wilson, Jo Brand, Gervase Phinn, Al Murray, Terry Wogan, Katie Price, Jack Dee and many more. One of these shops, Silverdell, has been voted "Independent Bookshop of the Year (Northern)".[9] The town has a number of garages, but no longer any petrol filling station.

Kirkham Club Day, an annual gala, is held in early June, jointly with Wesham. The day involves the various churches and their chosen "Rose Queens", together with biblical tableau floats, civic dignitaries and brass bands, walking in procession through the town in the morning. In 2010 Club Day was held on 12 June.[10]