Clitheroe is an industrial town in Lancashire. It is near the border with Yorkshire, across which is the Forest of Bowland, and this and the Pennine fells make Clitheroe popular as a base for tourists in the area. The most notable building in the town is Clitheroe Castle, suggested to be one of the smallest Norman keeps in the country.

The town was once a borough which before the Reform Act of 1832 elected two members to the House of Commons, and one member after it.

The name Clitheroe is thought to come from the Old English for "Rocky Hill",[1] and was in former dats also spelled Clyderhow and Cletherwoode.

The town was the administrative centre for the lands of the Honor of Clitheroe. These lands were held by Roger de Poitou, who passed them to the De Lacy family from whom they passed in 1311 to Thomas, Earl of Lancaster and subsequently, to the Duchy of Lancaster. At one point the town of Clitheroe was given to Richard, 1st Duke of Gloucester, later Richard III. Up until 1835 the Lord of the Honor was also by right Lord of Bowland, the so-called Lord of the Fells.[2]

The town's earliest existing charter is from 1283, granted by Henry de Lacy, Earl of Lincoln, confirming rights granted by one of his forebears between 1147 and 1177.[1] 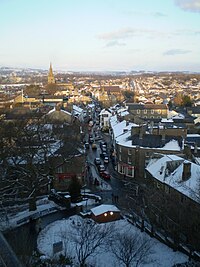 Clitheroe has several companies that each employs hundreds. Most significant are Ultraframe, Hanson Cement, Tarmac, Dugdale Nutrition and Johnson Matthey.

Hanson Cement has been criticised for using industrial waste in its kilns, which disturbs some local inhabitants suspicious of possible emissions; protestors continue to campaign for the use of industrial waste as fuel to cease.

Other businesses based in or around the town include light engineering, material handling), distribution, fuel suppliers and others.

There are a number of small industrial sites in and around Clitheroe with the most prominent being the newly expanded Link 59 Business Park to the north of the town.

During Second World War, the jet engine was developed by the Rover Company.[3] Rover and Rolls-Royce met engineers from the different companies at Clitheroe's Swan & Royal Hotel. The residential area 'Whittle Close' in the town is named after Frank Whittle, being built over the site of the former jet engine test beds. 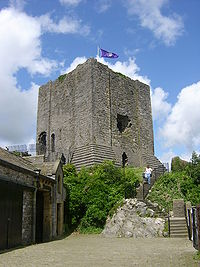 Clitheroe Castle is argued to be the smallest Norman keep in the whole of Britain. It stands atop a 115-foot outcrop of limestone and is one of the oldest buildings in Lancashire. It is also the only remaining castle in the county which had a royalist garrison during the Civil War; others were demolished or slighted by Parliament.

The castle's most prominent feature is the hole in its side which was made in 1649 as was ordered by the government. It was to be put in "such condition that in might neither be a charge to the Commonwealth to keep it, nor a danger to have it kept against them".

Dixon Robinson was in residence as Steward of Clitheroe until his death in 1878 and resided at the castle from before 1841. His son Aurthur Ingram Robinson lived at the Castle after 1878.

An annual cycle race, the Clitheroe Grand Prix takes place in the town.

Clitheroe is also home to the PESL Futsal Cup, an annual futsal tournament, which takes place every August at Edisford. 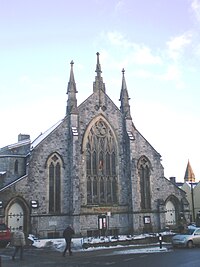