Southport is a seaside resort town in Lancashire, found 16½ miles north of Liverpool and 15 miles southwest of Preston, standing on the Irish Sea coast, fringed to the north by the Ribble Estuary.

Southport is characterised by guesthouses, beaches and facilities for holidaymakers, remaining popular notwithstanding the decline of the British beach holiday elsewhere. The town contains examples of Victorian architecture and town planning, on Lord Street and elsewhere. A particular feature of the town is the extensive tree planting. This was one of the conditions required by the Hesketh family when they made land available for development in the 19th century. Hesketh Park at the northern end of the town is named after the Hesketh family, having been built on land donated by Rev. Charles Hesketh.

The Lancastrian's nickname for people from Southport is "Sandgrounder".

Southport today is still one of the most popular seaside resorts in the United Kingdom. It hosts varied events including an annual Southport Airshow on and over the beach,[1] and the largest independent flower show, the Southport Flower Show in Britain, held in Victoria Park. The town is at the centre of the "Golf Coast"[2] and has hosted The Open Championship at the Royal Birkdale Golf Club.

Extensive sand dunes stretch for several miles between Birkdale and Woodvale to the south of the town. The Ainsdale sand dunes have been designated as a National Nature Reserve and a Ramsar site. Local fauna include the Natterjack toad and the Sand lizard.[3][4]

There have been settlements in the area now comprising Southport since the Domesday Book and some parts of the town have names of Norse origin.

Roman coins have been found hereabouts, but there is no other evidence of a Roman presence here.

The earliest surviving written is in the Domesday Book of 1086, recording a manor of Otergimele, which some have derived from a presumed Norse name Oddrgrimir and the Old Norse word Melr meaning sandbank. The Domesday Book states that there were 50 houses in Otergimele and a population of 200. The population was thin here. At Crossens, believed to be the northeast end of Otergimele blown sand gave way to the River Ribble Estuary where fishermen could thrive and farmers could plough the silted soil, and here a village could grow.

A church was built, which gave the emerging village its name of Churchtown, while the parish was North Meols. Today's church on the site is St Cuthbert's and is still at the centre of Churchtown to this day.

Parts of the parish were almost completely surrounded by water until 1692 when Thomas Fleetwood of Bank Hall cut a channel to drain Martin Mere to the sea.[6] From this point on attempts at large scale drainage of Martin Mere and other marshland continued until the 19th century, since which the water has been pumped away. This left behind a legacy of fine agricultural soil and created a thriving farming industry.

The foundation of Southport

Southport itself was founded in 1792 when William Sutton, an innkeeper from Churchtown, built a bathing house at what now is the south end of Lord Street, the town's main thoroughfare.[7] This caught the vogue of the time for sea bathing. Sutton's bathing house was amongst dunes at South Hawse by the seaside just four miles from the newly constructed Leeds and Liverpool Canal and two miles south-west of Churchtown.

In 1797, a widow from Wigan built a cottage nearby for seasonal lodgers, and Sutton built a new inn on the site of the bathing house which he called the South Port Hotel. The locals thought him mad and referred to the building as the Duke's Folly, but Sutton arranged transport links from the canal that ran through Scarisbrick, four miles from the hotel and trade was remarkably good. The hotel survived until 1854 when it was demolished to make way for traffic at the end of Lord Street, but its presence and the impact of its founder is marked by a plaque in the vicinity and by the name of one street at the intersection, namely Duke Street.[7] 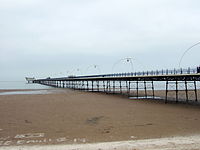 Southport grew quickly in the 19th century as it gained a reputation for being a more refined seaside resort than Blackpool, to which the mill workers resorted. Many seaside resorts began only when the railways made them accessible, but Southport had the canal to supply it; the Leeds and Liverpool canal brought people from Liverpool, Manchester, Bolton and Wigan amongst others and by 1820 Southport had over 20,000 visitors a year. In time the railway supplanted the canal and brought more.

Southport Pier was opened in 1860. It is today a Grade II listed structure and at 3,650 feet, it is the second longest in Britain. Southport Pier is referred to as the first true "pleasure pier" and is one of the earliest pier structures to be erected using iron.[8]

Louis-Napoléon Bonaparte lived in exile on Lord Street,[9] the main thoroughfare of Southport, between 1846 and 1848. He left to return to France to become President and soon afterwards Emperor of the French, as Napoleon III. During his reign, he caused much of the mediæval centre of Paris to be torn out and replaced with broad tree-lined boulevards, covered walkways and arcades, just like Lord Street. On the strength of this coincidence, it has been suggested that the redevelopment may have been inspired by memories of Southport's town centre.[10]

On the night of 9 December 1886, the worst lifeboat disaster in the history of the United Kingdom occurred off the shores of Southport. A cargo ship called the Mexico[11] was on its way to South America when it found itself in difficulty. Lifeboats from Lytham St Annes and Southport set off in order to try to rescue those aboard the vessel. The crews battled against storm-force winds as they rowed towards the casualty. The entire crew from the St. Anne’s boat was lost and all but two of the Southport crew were too. In all, 28 lifeboatmen lost their lives on that night, leaving many widows and fatherless children. There is also a memorial inside the Lifeboat house, now operated by the Southport Offshore Rescue Trust. Mexico was just one of many shipwrecks in the Southport area. 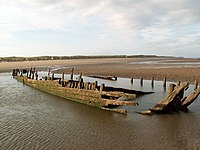 The Star of Hope

In 1925, the RNLI abandoned the station at Southport and left the town with no lifeboat. In the late 1980s, after a series of tragedies, local families from Southport started to raise funds and bought a new lifeboat for the town stationed at the old RNLI lifeboat house.[12] The lifeboat, operated by the Southport Offshore Rescue Trust, is completely independent of the RNLI and receives no money from them. Instead it relies entirely on donations from the general public.

On 21 March 1926, Henry Seagrave set the land speed record in his 4-litre Sunbeam Tiger Ladybird on the sands at Southport at 152.33 mph. This record lasted for just over a month, until broken by J G Parry-Thomas.

The Red Arrows at Southport Airshow, 2009 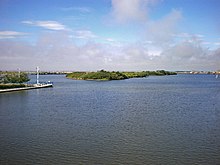 The longstanding Pleasureland attraction, a fairground established in 1912, closed in 2006. A replacement fairground on the same site, provisionally named New Pleasureland,[13] opened in July 2007. On 24 April 2009 a serious fire occurred at the oldest attraction within New Pleasureland. Called The River Caves, it was completely destroyed in this arson attack, and a 16-year-old boy was arrested in connection with the fire.[14][15]

Splash World is an indoor water park situated on the back of the Dunes swimming pool which opened in June 2007.[16]

Meols Hall [17] is a manor house, home of the Hesketh family is open to the public for a limited period each year. Set in its own expansive grounds, it boasts a history back to the Domesday Book and is full of interesting pictures and furniture.

The Lawnmower Museum,[18] a rare thing, is found in Southport

Victoria Park, also where the Southport Flower Show takes place. At its edge is The Power Station.

The town is probably best known for golf; the Royal Birkdale Golf Club situated in the dunes to the south of the town is one of the venues on The Open Championship rotation and has hosted two Ryder Cups. Nearby Southport and Ainsdale Golf Club is also a two time Ryder Cup venue and both Hillside Golf Club and Hesketh Golf Club host many major events as well as being final open qualifying courses. Many smaller links courses also surround the town.

In 1925, Henry Segrave set a world land speed record of 152.33 mph on the beach, driving the Sunbeam Tiger. His association is largely forgotten locally, but is commemorated by the name of a public house on Lord Stree

Marine Lake, between the town centre and the sea, is used for a variety of water-sports including water-skiing, sailing and rowing. The West Lancashire Yacht Club and Southport Sailing Club are based here.

The annual Southport 24 Hour Race, organised by the West Lancashire Yacht Club, is an endurance race of national standing, with an average turnout of 60 to 80 boats. In 2006, the event marked its 40th anniversary.[19]

The flat and scenic route alongside the beach is very popular with cyclists, and is the start of the Trans Pennine Trail, a cycle route running from coast to coast through Lancashire and Yorkshire, up to Selby (Yorkshire), through Kingston upon Hull and on to Hornsea on the east coast.

In June 2008, Cycling England announced Southport as one of the 11 new "cycling towns" shared in a pot of £47 million from taxpayers' money. Southport’s Cycling Towns programme aims to encourage tourism and leisure cycling, create regeneration opportunities and significantly increase cycling to school.[20] There are now many cycle lanes in Southport and more are planned, to encourage cycling in the town.