The M60 motorway, Manchester Ring Motorway, or Manchester Outer Ring Road, is an orbital motorway around the Manchester conurbation in Lancashire and Cheshire. It is 36 miles long and was numbered as such in 2000, with parts of the M62 and M66 and all of the M63 being amalgamated into the new route.[1] 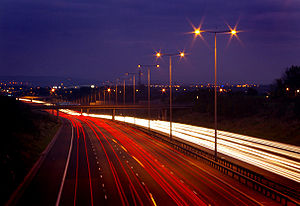 The M60 at Cutler Hill, Failsworth 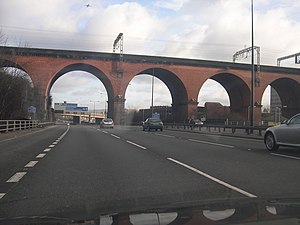 The M60 motorway as it passes beneath Stockport viaduct

The M60 was developed by connecting and consolidating the existing motorway sections of the M63, M62, and an extended M66. It came into existence as the M60 in 2000, with the completion of the eastern side (Junctions 19-24) opening in October.[2]

The original plan called for a completely new motorway, but policy change led to the plan which created the current motorway. As soon as it opened, the motorway got close to its projected maximum volume on significant sections.

As an orbital motorway, it is equivalent to London's M25 motorway; unlike the M25, the M60 forms a complete loop. In 2004, a section of the northern M60 was the UK's busiest stretch of road, with an average of 181,000 vehicles per day using the stretch between junctions 16 and 17. Usually, the western side of the M25 motorway holds that distinction, but the M25's figures at the time were lower than normal due to roadworks starting.[3]

Work to upgrade two sections of the M60 to a managed motorway system had been planned to commence in 2013. This would have included a new lane from junction 12 to 15 and a new lane from junction 8 to 12 near the Trafford Centre.[5][6] Both these projects were subsequently cancelled in favour of a new project that includes speed cameras on this section but no additional lane or hard-shoulder running. An 'environmental assessment' was cited as the reason an additional lane will not be provided. Consequently, daily congestion on this section is expected to continue indefinitely.[7] A combined approach was initiated in 2014, comprising managed motorway system and lane gain scheme. Work commmenced in July 2014 and is expected to be completed by August 2017