Morecambe Bay from East (bottom) to West (top): Lancaster and Morecambe to Barrow and Walney Island 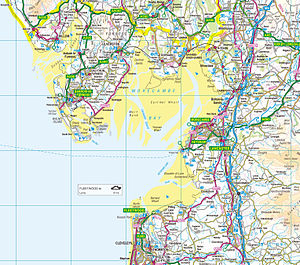 Morecambe Bay is a large bay of Lancashire, nearly due east of the Isle of Man and just to the south of the Lake District. It is the largest expanse of intertidal mudflats and sand in the United Kingdom, covering a total area of 120 square miles. In 1974 the second largest gas field in the United Kingdom was discovered 25 miles west of Blackpool, with original reserves of over 7 tcf. At its peak 15% of Britain's gas supply came from the bay but production is now in decline and the main field was mothballed in 2011.

Almost the whole coast of the bay belongs to Lancashire, but Westmorland at its southernmost reaches the bay on the River Kent estuary, around Arnside, splitting Lancashire into its two parts; south of the sands and north of the sands. Lancashire North of the Sands claims not to be divided from the body of the county by the waters of the bay but united by the broad sands which cross it, and footpaths, albeit perilous footpaths, cross the sands between the two sides of the county.

The natural bounds of the bay are Walney Island to the northwest and the Fylde in the southeast. Further west on the Irish Sea, the Duddon Sands, which mark the estuary of the River Duddon between Lancashire and Cumberland, partake of much the same character as the bay; a broad, shallow estuary emptied at the ebb revealing wide sands.

The bay received the name of "Morecambe Bay" only in the 18th century (it is not named after the town of Morecambe; that town is named from the bay). Before it came to be known as "the Bay of Morecambe", it was known as "the Levens" or "Kent Sands".

In the Claudius Ptolemy, the 2nd century Alexandrian Greek writer, described Britain in his Geographia and in this work he refers to an estuary on the Irish Sea coast he names Moricambe Aest. The historian Whitaker took this to be the Levens, and he named it accordingly, which name the bay has born ever since. Modern interpretations suggest this estuary might not be Morecambe Bay, but the name has stuck, and we will never know where Ptolemy really meant.

The name is from the ancient British language, which would have been spoken locally in Ptolemy's day; mor means "sea" and one might speculate that the name Moricambe might be "Sea of the Valley" (Môr y Cwm).

The rivers Leven, Kent, Keer, Lune and Wyre drain into the Bay, with their various estuaries making a number of peninsulas within the bay. Much of the land around the bay is reclaimed, forming salt marshes used in agriculture. Morecambe Bay is also an important wildlife site, with abundant bird life and varied marine habitats, and there is a bird observatory at Walney Island. The bay has rich cockle beds, which have been fished by locals for generations.

There are seven main islands in the bay, all off the coast of the Furness Peninsula:

Sheep, Piel, Chapel and Foulney Islands are tidal and can be walked to at low tide with appropriate care. Local guidance should be sought if walking to Chapel or Piel islands as fast tides and quicksand can be extremely dangerous. Roa Island is linked to the mainland by a causeway and is only rarely cut off.

William Camden wrote of the bay:

Footpath over the Sands 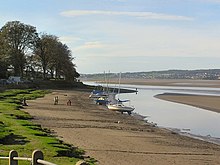 The two parts of Lancashire are joined by the sands, though at high tide the Irish Sea beats between them and to landward Westmorland separates them at Arnside. The estuary has a wide tidal range and at the flood the Kent estuary is over a mile and a half wide.

Two ancient footpaths across the sands, public rights of way still marked on the maps of which one route runs the 8 miles over the sands between Arnside and Grange-over-Sands in Lancashire. The other, from Hest Bank on the other side of Morecombe Bay, is yet longer.

Only at the ebb is is it possible to walk across the sands, but even then the sands are treacherous and the tide swift, and without an experienced guide, setting forth on the footpath will often be a fatal undertaking.

Before the railway these routes were the main land route to Furness, but it was always hazardous. The King's Guide to the Sands was first employed by King Henry VIII to lead travellers across the treacherous sands, and the position is still maintained; the Queen's Guide to the Sands will still lead the intrepid across the bay from Arnside, or once a year from Hest Bank, testing the ever-changing surface, watching for the quicksands, placing hazel trigs in the sand as he goes to mark the way.

With each high tide Arnside is subjected to a very fast rising tide. Because of the potential danger warning notices are posted at the pier, and an audible warning is sounded before every high tide (in daylight). The sequence of warnings is:

The cause of this fast tide is a combination of the large area of Morecambe Bay, narrowing rapidly at Arnside, plus the second highest tidal range (at Barrow, which can be as much as 32 feet on a spring tide nearest the Spring and Autumn equinox, and these typically give rise to a tidal bore, which may be as high as 12 inches, and is often ridden by canoeists.[2]

There have been royally appointed local guides (holding the post of Queen's Guide to the Sands) for crossing the bay for centuries. This difficulty of crossing the bay added to the isolation of the land to its north which, due to the presence of the mountains of the Lake District, could only be reached by crossing these sands or by ferry, until the Furness Railway was built in 1857. This skirts the edge of the bay, crossing the various estuaries. The London-Glasgow railway also briefly runs alongside the bay - the only place where the so-called West Coast Main Line actually runs alongside the coast. 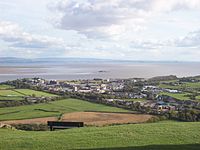 The bay is notorious for its quicksand and fast moving tides (it is said that the tide can come in "as fast as a horse can run"). On the night of 5 February 2004, 23 Chinese trafficked cockle pickers drowned after being cut off by the tides.[3][4]

Morecambe Bay was featured on the television programme Seven Natural Wonders (BBC) as one of the wonders of the North.

Some 319,100 people live along the coastline of Morecambe Bay,[5] with many of these people residing in the towns listed in the table below. The largest town by far on the bay is Barrow-in-Furness located to the north-west of it, whilst the town which adopted its name from the bay (Morecambe was previously called Poulton-le-Sands) has a population of around half of Barrow's. Morecambe relied on the bay for many years, as a popular seaside holiday destination, whilst Barrow still relies on the seas for a large percentage of its economy - ship and submarine building.

The main towns on the bay are all in Lancashire: 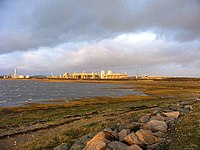 The bay has Britain's second-largest natural gas field,[6] in the Triassic Sherwood Sandstone with a seal of Mercian Mudstone[7] and a Carboniferous source.[6] The South Morecambe Field, covering an area of 32 square miles, was discovered in 1974 and the first gas came ashore in 1985.[8] The North Morecambe Field, found in 1976 eight miles to the north, is 11 square miles and started production in 1994.[8] Both are operated by Centrica Energy.[8] They are 25 miles west of Blackpool in 100 feet of water;[8] the top of the gas reservoir is at a depth of just 2,950 ft, necessitating slant drilling for the first time in European waters.[7] The combined gas reserves on discovery were estimated at 6.45 trillion cubic feet (tcf).[8] A further 0.65tcf is recognised in the satellite fields of Bains, Calder (Rivers), Dalton, Millom East and Millom West, and a number of smaller fields have been identified.[8]

The gas is landed at three terminals at Westfield Point in Barrow-in-Furness, collectively referred to as the Rampside Gas Terminal.[8] The South Morecambe Central Processing Complex is connected via a 36-inch pipeline to the South Morecambe terminal.[8] North Morecambe gas has a different composition so the unmanned Drilling and Production Platform is linked by a separate 36" wet sealine to the North Morecambe Terminal, where it is stripped of water, CO2 and nitrogen.[8] The Rivers Terminal has a dedicated pipeline for sour gas from the Calder field, which must be stripped of hydrogen sulphide before processing by the North Morecambe Terminal.[8] The hydrogen sulphide is converted to sulphuric acid which is sold for industrial use. In 1991 a 229MW CCGT power plant was opened near the terminals, on the site of the former coal-fired Roosecote Power Station. There is a support base at Heysham Port and personnel are typically moved by helicopter from Blackpool International Airport.[8]

At peak production 15% of UK supply came from the two main fields.[8] As of 2006 Centrica reckoned there was about 1.2tcf of economic gas remaining in them, and they planned to operate the fields for another 10-15 years.[8] In June 2011 they announced the South Morecambe field would be mothballed with the intention of producing it at times of high gas prices.[9] This was the result of tax increases in the 2011 Budget which meant South Morecambe would be paying a rate of 81% tax; North Morecambe and Rivers would continue in production[9] as they are taxed at 62%.[10]

Discussions as to whether to build a road bridge over the bay have been ongoing for decades, particularly in the more isolated north of the bay. The most recent suggestion was the desperate idea of a "green bridge", flanked by wind turbines and using tidal power to mitigate the environmental damage of its construction, stretching from Heysham to Barrow-in-Furness, at the bay's mouth. Such a bridge would be twelve miles long making it the longest bridge in the country, and longer than anything in Europe.

Members of Parliament in Cumberland have hailed the proposed bridge as a saviour for local industry. Finance is lacking however. 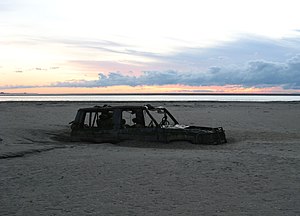 Abandoned car in Morecambe Bay, 400 yards from the shore