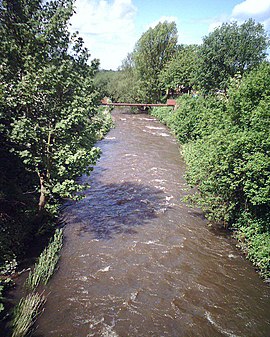 The River Douglas, also known as the River Asland or Astland,[1] is a river 35 miels long, wholly in Lancashire, and which is ultimately is a tributary of the River Ribble. The Douglas itself takes the waters of two main tributaries; the River Tawd and the River Yarrow.

The river rises on the slopes of Winter Hill on the moorlands of the Lancashire Pennines. From here it flows south-west and down into the big towns of south Lancashire, first to Horwich and then on to Wigan. Flowing through the middle of Wigan the river is navigable, and has enabled Wigan to serve as an inland port: the famous Wigan Pier is on the Douglas.

The River Douglas under Bank Bridge at Tarleton

The Douglas from the gardens at Bank Hall

Below Wigan the Douglas turns west and then northwest through several towns, and enventually comes to the Ribble estuary beyond Tarleton. The last 10 miles are tidal.

In 1892 the Douglas was diverted in Wigan to allow the construction of Wigan Central railway station.

In 1720 an Act of Parliament was passed allowing Thomas Steers and William Squire to make the Douglas navigable to small ships between Wigan and its mouth. Amid financial irregularities, the Douglas Navigation was not completed until 1742, and by 1783, it had been superseded by the Leeds and Liverpool Canal.[2]

The rivr reverted to being a more natural river, although the remains of several locks can still be seen between Parbold and Gathurst.[3]

The Rufford Branch of the canal joins the river at Tarleton.