Ramsbottom is a market town in Lancashire, on the River Irwell four miles north of Bury. It sits in the valley bottom of Rossendale, amongst the Pennine Hills.

The Victorian architecture of Ramsbottom, its industrial heritage, including the East Lancashire Railway and the beautiful Pennine landscape contribute to heritage tourism in the town.

The name of the town is from Old English: 'Bottom' means just that (the Old English word being botm) and refers in this case to the valley bottom. The prefix may be from ramm ('ram') or hramsa ('wild garlic')

A record from 1324 recording the name as Ramesbothum is inconclusive as to the two rival etymologies.[1] The town was alternatively recorded as Ramysbothom in 1540.[2]

Evidence of prehistoric activity has been discovered in the hills surrounding the town. Early records show that in Norman times Ramsbottom was part of the Forest of Rossendale. There are a number of Bronze Age burial sites around the town, the most notable of which is Whitelow Cairn, one mile southeast of the town centre and three miles north of Bury. The cairn was excavated by Bury Archaeological Group between 1960–62.[3] Finds include one main and seven secondary cremations, four in urns, dating to the mid Bronze Age. Artefacts found during the excavation are housed in Bury Museum.

The early Anglo-Saxons who gave Ramsbottom its name progressively felled the woodland during the Middle Ages. Ramsbottom became an area of scattered woods, farmsteads, moorland and swamp with a small community of families until the late 18th century.

Ramsbottom developed during the 19th century as a manufacturing and mill town on the road from Bury to Haslingden by the River Irwell, its suburbs stretched south to Hazelhurst and north to Stubbins.[4] Mills were built for spinning, weaving and printing. Square Mill was in its day innovative in combining many such processes under one roof.

With a readily available source of water power, Sir Robert Peel purchased land in Ramsbottom in the late 18th century to commence a major manufacturing career. It is this exchange that effectively founded Ramsbottom as a homogeneous settlement; the factory system, and Industrial Revolution facilitated a process of unplanned urbanisation in the area, contributing to it becoming an important and populous mill town.

The Grant Arms Hotel in Market Place was the home of William and Daniel Grant, 19th century industrialists closely associated with the rise of the town and reputed to be the inspiration for the Cheeryble brothers in Nicholas Nickleby by Charles Dickens.[4][5] The Grants' employees were paid in tokens that had to be redeemed at a public house owned by the company. The landlord converted the tokens into cash, but only after deducting threepence per person, which had to be spent on beer, a variation on the truck system.[6]

A network of roads and railways routed through Ramsbottom allowed for a series of diverse industries, including calico-printing, cotton spinning, machine-making, rope-making and iron and brass founding. Imports of foreign goods during the mid-20th century precipitated the decline of these sectors. 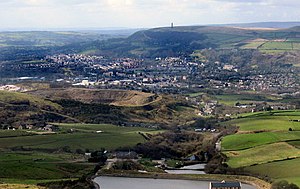 Ramsbottom lies amongst the South Pennines

The Ramsbottom parish formed in 1844 was a mile and a quarter in length and about three-quarters of a mile in width in the Lower Tottington township in the valley of the River Irwell that extends from Bury to Rossendale. It is bounded to the south by Holcombe Brook and Summerseat; to the north by Edenfield, Irwell Vale, Stubbins and the hamlets of Chatterton and Strongstry; to the west by Holcombe and to the east by Shuttleworth and Turn Village.

The area is characterised by its position on the south side of the West Pennine Moors. The high ground rises sharply on either side of the town with Holcombe Moor, Harcles Hill and Bull Hill to the west and Top O' Th' Hoof, Harden Moor, Scout Moor and Whittle Hill to the east.

The skyline is dominated by the Peel Monument which stands on Holcombe Moor, a memorial to Sir Robert Peel, the 19th century Prime Minister and creator of the modern British police force, whose family industrial ventures were here in Ramsbottom. The tower stands 128 feet tall on Holcombe Moor.[7] There are spectacular views over the West Riding of Yorkshire, northern and southern Lancashire and as far as the Cambrian Mountains. From the top of the tower it is possible to see Blackpool Tower on a clear day.

Ramsbottom is on the path of the Irwell Sculpture Trail. The 'Tilted Vase' by Edward Allington, a sculpture both classical in shape to reflect the surrounding buildings but apparently bolted together to reflect the old industries, is located in Market Place. This piece of work, weighing around two tons and locally known as 'the Urn', was funded with £250,000 of National Lottery money.[8]

Nuttall Park is a large park with facilities for bowls, tennis, football and public events. The park hosts regular fun fairs and family events, and is a popular attraction with locals and tourists alike.

St Andrew's Church, the oldest church in Ramsbottom, was built by the Grant family in 1834 as a Scottish Presbyterian Church. In the 1860s a member of the Grant family deprived the congregation of its church and in 1869 offered the building to the Bishop of Manchester as an Anglican church. It became a mission church for St Paul's until 1875 when it was consecrated as the Parish Church of St Andrew. 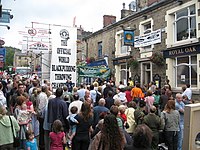 Before the Blackpudding Throwing Championships

On Good Friday, hundreds of people climb Holcombe Hill.[11][12] A smaller gathering keeps alive the tradition of egg rolling before the start of the climb. Large gatherings on the hill are visible from miles away, and occasionally attract unorthodox religious preachers. In recent years the celebrations have become more secular, with the public house at the bottom of Holcombe Hill attracting as many as 3,000 visitors leading to complaints from residents and restrictions being imposed by the council.[13]

On New Year's Day an annual exhibition of game fowl is held at the Old Dun Horse Hotel, a tradition since 1843.[14] This competitive show replaced the annual cockfight that took place in the town square after the New Year Holcome Hunt.[15] The exhibition, organised by the Holcombe Old English Game Fowl Club, is said to be the oldest gamecock show in the world.[16]

The Black Pudding Throwing World Championships are held annually at the Royal Oak (now the Oaks) pub on Bridge Street. Participants have to toss black puddings in an attempt to dislodge a stack of Yorkshire puddings on plinths on two levels (one for children, the other for adults). The winner is the one who dislodges most Yorkshire puddings in three attempts.[17]

The Summerseat Players, a registered charity run entirely not-for-profit, puts on five performances in each season, and performances by local schools and dance groups, and the company's youth theatre groups. The amateur dramatic group was formed in 1968, and performed at St Winifred's Church Hall in Summerseat. In 1990, with donations and loans from members and enthusiasts, the company purchased the Theatre Royal on Smithy Street in Ramsbottom.[18]

Ramsbottom hosts an annual rhythm & blues festival. The now defunct pub the Corner Pin, was where the band Elbow played their first gig.[19] The Ramsbottom Recorded Music Society was formed in 1967 to promote an interest and appreciation of music and meets bi-weekly on Thursday evenings at Christ Church Neighbourhood Centre.