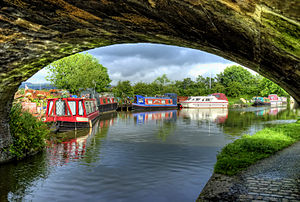 The Lancaster Canal runs though Lancashire and into Westmorland, though interrupted in its route by twentieth century development. It was built as an industrial canal, planned to run from Westhoughton in Lancashire to Kendal in Westmorland. The section around the crossing of the River Ribble was never completed, and much of the southern end leased to the Leeds and Liverpool Canal, of which it is now generally considered part.

Of the canal north of Preston, only the section from Preston to Tewitfield near Carnforth is currently open to navigation for 42 miles, while the canal north of Tewitfield has been severed in three places by the construction of the M6 motorway, and by the A590 road near Kendal. The southern part, from Johnson's Hillock to Wigan Top Lock, remains navigable as part of the Leeds and Liverpool Canal. The planned continuation to Westhoughton was never built. 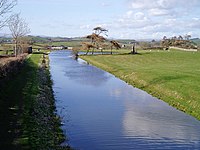 The canal at Farleton, Westmorland

The line of the canal was first surveyed by Robert Whitworth in 1772. In 1791, John Longbotham, Robert Dickinson and Richard Beck resurveyed the proposed line, and a final survey was carried out later the same year by John Rennie.[1]

In 1792 the promoters sought an Act of Parliament urgently, as proposals by the Leeds and Liverpool Canal to alter their route would have affected the profitability of the southern section.[1] It received the Royal Assent on 11 June 1792, and was entitled An Act for making and maintaining a navigable Canal, from Kirkby Kendal in the county of Westmoreland, to West Houghton in the county palatine of Lancaster, and also a navigable Branch from the said intended Canal at or near Barwick, to or near Warton Cragg, and also another navigable Branch, from, at or near, Galemoss, by Chorley, to or near Duxbury in the said county palatine of Lancaster.[2]

The Act created the Company of Proprietors of the Lancaster Canal Navigation, and gave them powers to raise £414,100 by the issuing of shares, and an additional £200,000, either by mortgage or by issuing more shares, if required.[2] John Rennie was appointed as Engineer in July 1792, with William Crossley the elder as his assistant, and Archibald Millar as resident engineer and superintendent. A second Act of Parliament was obtained in May 1793 to authorise the construction of the Glasson branch, so that the canal had a connection to the sea.[1] 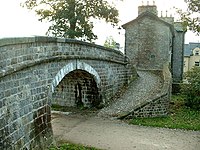 Change Bridge on the route through Kendal

Work started almost immediately on the level pound from Preston to Tewitfield, and in 1794 on the Lune Aqueduct, which was built of stone, although Rennie thought brick should have been used, as it would have been considerably cheaper. By 1797 the aqueduct was open, carrying the canal 62 feet above the river,[3] and boats were now able to travel the 42.4 miles from Preston to Tewitfield. In 1813, work began on the canal north from Tewitfield, which was completed to Kendal in 1819.[4] Construction on the 2.5-mle Glasson Dock branch began in 1819, and it opened in 1826, with six locks carrying the canal down to the sea.[5] 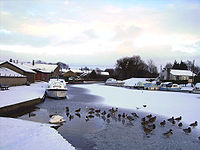 The basin at Carnforth, frozen over in the winter

With the coming of the railways, the proprietors sought to lease the canal to a railway company in 1860. After a Bill to authorise the arrangement with the London and North Western Railway was defeated in the House of Lords in 1863, it was reintroduced the following year, and became an Act of Parliament on 29 July 1864. The Canal Company then received £12665.87 per year for the lease of the northern end of the canal, which allowed them to continue paying dividends and to make investments. Eventually, the railway company offered to buy the canal, and this was formalised by an Act of Parliament obtained on 16 July 1885, although they actually took over the canal on 1 July.[6]

The canal had always suffered problems with leakage due to limestone fissures in the bed, and in 1939 the London, Midland and Scottish Railway, who were by now owners of the canal, obtained an Act to close the first half-mile section at Kendal.

In 1941-42 the by then unused section north of Kendal Gas Works was closed because of leakage, and the owners attempted to close the whole canal in 1944, but opposition in the House of Lords resulted in a stay of execution. In later years, the main commercial traffic was coal from Preston to Kendal Gas Works, which had been built in 1824 on land bought from the canal company, and between 6,500 and 7,500 tons were carried each year. As there was no railway to the gas works, this traffic had ensured the maintenance of the canal, but it was transferred to road vehicles in 1944, and the canal carried its final commercial traffic in 1947.[7]

In 1955, an Act of Parliament authorised the closure of the canal, along with several others, covering 771 miles in total. The Inland Waterways Association organised several protest meetings, and the one held in Lancaster led to the formation of the Lancaster Canal Boat Club.[8] One immediate effect was that it was drained of water north from Stainton because of leakage, and the last 2 miles in Kendal were filled in. Although it was officially closed, pleasure boats continued to use the section below Tewitfield. Above the locks, a 100 yardsection at Burton was drained because of problems with leakage, and a pipe replaced the canal, so that the water supply to the lower canal was maintained. This effectively ended navigation north of Tewitfield, so that when the M6 motorway was being constructed, the canal was culverted in three places, despite a local campaign for bridges to be built, so that restoration would be possible in the future.[9]

The route of the canal south from Kendal is still readily apparent, with most of the bridges remaining in place. Although severed by the motorway construction, it was not drained because the channel was used to supply water to a pipeline which ran from the canal near Garstang to a chemical works near Fleetwood. As a result, this section can still be used by small boats.[10] In 1976, the Lancaster Canal Trust mounted a campaign for the construction of slipways on this section, to make the launching of boats easier, which proved to be successful, as they were used at Easter 1978, when a boat rally was held on the upper reaches.[11]

During its working life, packet boats provided an express passenger service between Preston and Lancaster, and later to Kendal at 10 mph, with passengers walking up or down the flight of locks at Tewitfield and embarking on a second boat. The seven-hour journey time halved the best speeds of stage coaches; because of the comfort of the journey, passengers stayed loyal to the packet boats even after the advent of railway competition in the 1840s.

The isolated northern part of the canal was finally connected to the rest of the canal network in 2002 by the opening of the Ribble Link.[12]

Most of the canal runs through open countryside except where it runs through the City of Lancaster. With the exception of the branch to Glasson Dock and the Ribble Link, the navigable Preston to Tewitfield section of the canal follows the same elevation contour on maps and is therefore free of locks.

The Kendal to Preston section now terminates at Ashton basin, but previously continued to the centre of Preston where there are a number of streets and pubs whose names give clues: Wharfe Street, Kendal Street, The Lamb and Packet (the lamb being the crest of Preston), The Fighting Cocks (formerly The Boatmans). Most of the ground formerly occupied by the canal basin is now the University of Central Lancashire.

By 1799, the canal was complete between Bark Hill near Wigan and Johnson's Hillock near Chorley. However, by 1801, no design had even been agreed for the aqueduct over the River Ribble, and in July 1801 it was agreed to build a temporary tramroad to cross the river and span the gap between the northern and southern parts of the canal. The double-track Lancaster Canal Tramroad was opened in 1803 with three steam-worked inclined planes and a low trestle bridge across the Ribble. The canal was extended north from Johnson's Hillock to Walton Summit through a tunnel at Whittle Hills.[13]

This temporary solution become permanent, and the aqueduct was never built. Although this section was the busiest on the canal, income was insufficient to pay for construction of the planned aqueduct. 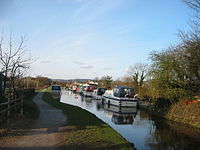 The canal in Bilsborrow, Lancashire

In 1792 the Lancaster obtained an act to link Kendal with Westhoughton. They also petitioned to make an extension from Westhoughton to the Bridgewater Canal near Worsley but stopped when the occupant of Atherton Hall objected.[14]

In 1851 the Lancaster Canal leased the tolls on the southern end to the Leeds and Liverpool Canal in return for an annual rent, and this agreement was made permanent in 1864.[6]

The tramroad was closed from Bamber Bridge to Preston in 1864, and the remainder to Walton Summit in 1879. The canal between Walton Summit and the Leeds and Liverpool link at Johnson's Hillock was last used in 1932 (although a party in canoes managed to navigate the branch as late as 1969 with only two portages)[16] This section was closed in the 1960s, as a result of the M61 motorway proposal which would have required three bridges over the canal. The Ministry of Transport and British Waterways Board decided that the cost of constructing the bridges was not justified, particularly as the canal was in poor condition, and promoted a bill in Parliament for closure of the canal.[17] As a result, much is now buried under the M61 motorway, and in the Clayton-le-Woods area housing estates have been built on the route in the 1990s. The remainder of the southern end, between Johnson's Hillock and Wigan Top Lock, is now considered as part of the Leeds and Liverpool Canal and remains well used by leisure traffic.

Long term plans are being developed to reopen the section north of Tewitfield, which is still in water for 9 miles, fed by Killington Reservoir between Kendal and Sedbergh adjacent to the M6 motorway : the final 5 miles into Kendal are dry.

The restoration will involve restoring the six places where the canal is culverted (including the three places where the M6 Motorway construction blocked the route), restoring Hincaster Tunnel, restoring the 5 dry miles, and a new crossing of the A590 road near Kendal, as well as many more minor works including work on 52 listed structures. The extensive engineering required will be expensive (a 2002 estimate being £60 million), and so restoration is planned to proceed in phases.

The first phase is planned to be restoration of 3.7 miles southwards from Canal Head in Kendal to Natland Road. Funding of £750,000 was provided in 2005 for the planning and design of this first phase: construction works are not expected to commence before late 2007 with completion in 2009 at the earliest. Despite the projected 2009 completion date, the work to restore the canal had still not been started by late 2010.

The Grade 1 Listed Lune Aqueduct was scheduled for a two million pound facelift in 2009/10.[18] The organisations responsible for the aqueduct have been awarded £50,000 by the Heritage Lottery fund to enable them put together a credible bid for funding, but the work is not now expected to be completed until 2015.[19]