Skelmersdale is a New Town in Lancashire, in the West Derby Hundred. It stands lies on high-ground on the River Tawd, six miles west of Wigan, and 13 miles north-east of Liverpool. As of 2006, Skelmersdale had an estimated population of 38,813, down from 41,000 in 2004.

The first recorded use of the name Skelmersdale appears in the Domesday Book of 1086. It was under the rule of Uctred.

The urbanisation and development of Skelmersdale largely coincided with the Industrial Revolution. Industrial scale coal mining began in the early 19th century and continued to expand during that century to give rise to Skelmersdale as an important colliery village. Skelmersdale was designated as a New Town in 1961 and has been developed as such, from a mining village to a modernist town.

The River Tawd flows through Skelmersdale into a country park. The main country park is at Ashurst Beacon, a hillside location that is also home to a golf club.

The name Skelmersdale means "Skjaldmarr's valley", from an Old Norse personal name, with Old Norse dalr (or Old English dæl) meaning in either case "dale ". The name was recorded as Skalmeresedel in 1136.

The town is known locally as "Skem",[1] with a further distinction being made between "Old Skem" (the area which was a small mining town prior to 1961) and the broader swathe of development which has now developed.

Skelmersdale long belonged to the Parish of Ormskirk. In the mid-14th century, the manor of Skelmersdale was held by William Dacre, 2nd Baron Dacre.[2]

Skelmersdale's population in 1851 was only 760, but 50 years later it had increased to 5,699. It was a busy coal mining town.[3] It was rough work, and there were over 100 deaths in Skelmersdale collieries from 1851 to 1900, according to the Reports of the Inspectors of Coal Mines, and an unknown number of serious injuries. In 1880 there were 14 colleries in Skelmersdale, most of which closed in the 1920s and 1930s. 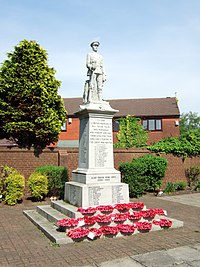 Many miners were brought over from the coalfields of Glamorgan and Monmouthshire to Skelmersdale, and they with them their own brand of Nonconformist Christianity. By the start of the 20th century there were at least six dissenting chapels in the town: two Wesleyan (Berry Street, closed in the 1920s, and Liverpool Road, closed 1969), an independent Methodist, a Primitive Methodist, a Congregational, and a Welsh Chapel (closed in 1963).

Today's new town has little to remind folk that the town was ever associated with the once great Lancashire Coalfield.

There were also numerous brickworks in the area, and in the early-20th century Victoria County History, Skelmersdale was described as "a particularly bare, unpleasing district" owing to its coal mines and brickworks.[4]

Skelmersdale was designated a New Town in 1961, designed to house overspill population from Liverpool and its surrounding towns and suburbs. The town was the first in the second wave of New Town designations.

Due to the arrival of a large number of former Liverpool residents, the town retains a strong cultural association with Liverpool.

Skelmersdale endured mixed economic fortunes during the last three decades of the 20th century. With the economic downturn in the late 1970s large industrial employers left the town en masse, resulting in an increase in crime, drug abuse and poverty. Today, Skelmersdale and its district have a crime rate well below the national average.[5]

The Skelmersdale New Town Development Corporation was wound up in 1985 and its residual property and responsibilities passed to the Commission for New Towns.

The depredations of poor 1960s design have often come under scrutiny. In 2006 came a plan to see a regeneration drive for the town coordinated through English Partnerships and the Northwest Regional Development Agency and publicly headed by the designer Wayne Hemingway.[6] Among the proposals was a new central focus for the entertainment and commerce for the town in the evening.[1]

In 2012 a £20 million vision to create a thriving town centre for Skelmersdale and up to 500 permanent jobs was published. Proposals include a new foodstore, bars, shops and restaurants and bringing a five-screen cinema to the town. A new promenade would be fronted by bars and restaurants which would overlook Tawd Valley Park. A new civic square will also be formed between the concourse and the library.About 100 more jobs would be created in the scheme's construction. Regeneration investors St Modwen have been working on the proposals with the council and with the Homes and Communities Agency.

Skelmersdale has units of the Air Training Corps, Army Cadet Force and Sea Cadet Corps. These units take part in the local community life and are routinely seen attending the Remembrance Sunday parade in the old town.

1439 (Skelmersdale) Squadron, Air Cadets, formed at Upholland Grammar School in 1941 as 'The Beacon Squadron' and provided airmanship training for young men and those about to join the RAF in time for the Battle of Britain. The Squadron continues to provide airmanship training to young men and women in addition to other activities. Its badge shows the Ashurst Beacon and a Canadian Maple Leaf.

The Army Cadets are part of 'S' Company of the Lancashire Force. They are based at Daniels Lane.

The Sea Cadets are also well established in Skelmersdale as "TS Rodney" and are based at Tawd Road. 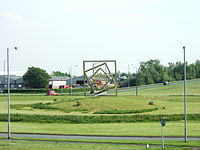 The layout of the town is marked by its oversized roundabouts (the largest of which is "Half Mile Island" which, with a circumference of 0.7 miles, is claimed as Europe's second biggest) and a complete absence of traffic lights. Skelmersdale's road system has improved with better signage, although visitors still frequently get lost.

The New Town areas of Skelmersdale have a road-naming system where "Road" and "Street" are rarely used and single-name roads are common, e.g. Abbeywood, Fairburn, Brierfield, Thornwood. "Road", "Street", "Lane" and "Drive" do appear in road names, but only in the parts of the town (bordering on Ormskirk, St Helens and Wigan) that pre-date the New Town development.

The road names in New Town areas are also arranged in a loosely alphabetical format with large areas being defined by a single letter, for example Larkhill, Leeswood, Ledburn and Lindens all connect to Ashley Road in the Ashurst area.

The M58 motorway (Liverpool – Wigan Motorway) runs along the south of Skelmersdale from the nearby M6 motorway to the Switch Island interchange at Liverpool. The A570 and the A577 both provide connections.

Although consisting predominantly of housing estates, Skelmersdale has industry in the form of corporate headquarters, distribution and manufacturing:

Skelmersdale's town centre is made up of The Concourse Shopping Centre,[11] colloquially known as "The Conny".

There are an abundance of smaller shopping parades in Skelmersdale which include Sandy Lane, Digmoor Parade and Ashurst Shopping Centre.