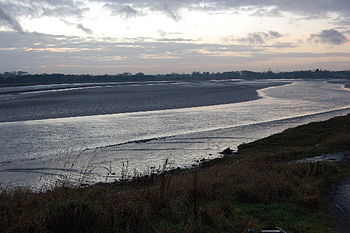 The Tidal Wyre at Shard 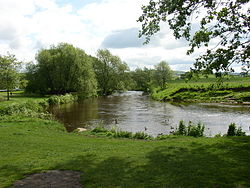 The Wyre at Garstang 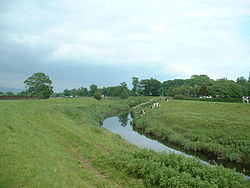 The Wyre near St Michael's On Wyre

The River Wyre is a river in Lancashire which flows into the Irish Sea at Fleetwood. It is approximately 28 miles in length.

The river has its origin in a number of streams issuing from the Forest of Bowland in Yorkshire, and the Wyre itself begins at the meeting of two distinct tributaries, the Tarnbrook Wyre and the Marshaw Wyre, whose confluence is near the village of Abbeystead in Lancashire.

A toll bridge (taking a toll of 50 pence) crosses the Wyre at Cartford, between Little Eccleston and Out Rawcliffe. A former toll bridge, Shard Bridge, close to Poulton-le-Fylde, has been rebuilt and is now free. The Lancaster Canal crosses over on a small aqueduct at Garstang.

A pedestrian ferry runs between Fleetwood and Knott End but the ferry to the Isle of Man no longer runs.

About the river and its valley

Major industry existed at the former ICI site at Burn Naze, close to the estuary of the river. It was originally an alkali works taking brine from mines and wells across the river in and around Preesall. Later processes undertaken on the site included those dealing with Vinyl Chloride Monomer, although this was later moved to Runcorn and ICI activity on the site ceased. Industrial activity by a number of various companies continues by the river, albeit on a much reduced scale.

The area around Burn Naze on the western side of the Wyre Estuary was formerly known as Bergerode, believed to be an Old English term for "shallow harbour", beor grade.[1]

From Skippool, just downstream of Shard Bridge, to Fleetwood, the banks of the river form the Wyre Estuary Country Park. Facilities exist on the western bank. The park has its headquarters at Stanah. It has been the recipient of a Green Flag Award.

Fleetwood at the mouth of the river was a major fishing port up until the latter part of the 20th century. Wyre Dock was built there between 1869 and 1877. With the decline in the size of the fleet, most of the dock complex has subsequently been converted to a marina and the adjacent "Freeport" shopping village.

The Wyre is reputedly the longest river in Britain whose estuary can be seen from its source.

In 1984 a pumping station, built just below the confluence as part of a water transfer scheme in the 1980s, was the location of the Abbeystead disaster, an explosion in which 16 people were killed and a further 22 were injured.

The river is a “County Biological Heritage Site”.