Walney Island, also known as the Isle of Walney, lies off the coast of the Furness peninsula of Lancashire. 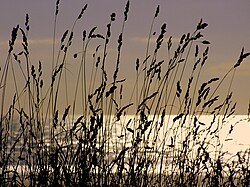 The island lies in the Irish Sea to the west of the Furness peninsula. It has been connected to Barrow in Furness on the mainland by the Jubilee Bridge since 1908. The Jubilee Bridge spans Walney Channel and until its commission, a ferry was used in order to cross the channel.

The island is around eleven miles long and less than a mile wide at its widest point. Its total area is five square miles. The island was developed to house workers of Vickers Shipbuilding and Engineering Ltd, with an area of the island retaining the name Vickerstown today.

Walney has a golf course, an outdoor children's play area and two wildlife reserves (North Walney, a National Nature Reserve, and South Walney). There are a number of Sites of Special Scientific Interest, providing a habitat for natterjack toads as well as many species of birds. 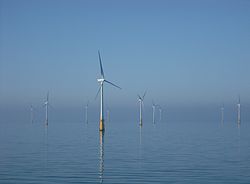 The island is said to be the windiest lowland site in England.[1] Recently an offshore wind farm has been built almost five miles off the island's West coast. The wind farm consists of thirty 300-foot 3 MW wind turbines. Construction was completed in September 2006.[2] There are plans for more wind farms with up to 100 turbines off the coast, to the dismay of some local people as the Island is famous for its sunsets and views off the West coast and if the turbines are erected in their proposed number, this may affect the island's popularity.

Walney Island has a small airport (Barrow/Walney Island Airport); privately owned by BAE Systems located at the northern end of the island, home to the Lakes Gliding Club.

The island has a population of about 13,000. The five main settlements are:

Axe and arrow heads have been found on Walney from the bronze age, indicating that the island has been settled for at least around 3,000 years.

The name "Walney" is thought to come from the Old Norse valna ey, of uncertain meaning, though 'Isle of the Britons' has been suggested, cognate with Old English Wealna Ieg. The area was within Norse influence during the Viking Age and may have attracted Norse settlers. One of the main areas of settlement, Biggar Village has been inhabited since at least the 11th century.

Walney is mentioned in the Domesday Book of 1086 as Hougenai, possibly from an Old Norse name derived from haugr meaning "mound" or "hill".[3]