Colne is a fair-sized town in the fell-gird east of Lancashire, with delightful landscape around it. The town's population was counted at 20,118 in 2001.

Colne stands in the Aire Gap, 6 miles northeast of Burnley, with Nelson immediately adjacent. It is at the eastern end of the M65, and has two main roads leading into the Yorkshire towns of Skipton and Keighley.

There is beautiful countryside around Colne and many old villages close by, including the Bronte Country and Haworth to the south east and Pendle Hill, Newchurch and Barley and Clitheroe to the northwest. Nearby villages include Barrowford, Foulridge, Winewall, Cottontree, Trawden and Laneshaw Bridge and the hamlet of Wycoller with its historic pack horse bridge and clam bridge said to date back to the Iron Age. Wycoller Hall is a ruin there.

There are narrow roads to the south over the moors to Hardcastle Crags and Hebden Bridge. Over in Yorkshire, the beauties of the Forest of Bowland attract the traveller.

Traces of the hand of man can be found back to the Stone Age. A Mesolithic camp site, a Bronze Age burial site and stone tools from the Bronze and Stone Ages have been discovered at nearby Trawden, and there are also the remains of an Iron Age fort, dating from the 6th century BC, above Colne at Castercliff. A Roman road passes through nearby Barnoldswick, and some Roman coins have been discovered, but there is no evidence of a settled Roman occupation of the area. There is, however, some debate among local historians as to whether the Romans may have stayed at Castercliff.

After the Norman Conquest, from the 1090s until 1311, the area was controlled by the de Lacys of Pontefract from their outpost at Clitheroe Castle. Pendle Forest and Trawden Forest date from this period, established as hunting grounds. St Bartholomew's Church dates from before 1122 when the town's market was located in the churchyard. The churchyard used to house wooden stocks on wheels - these are now in the library. Wrongdoers were locked in the stocks on market days in past age[1] though the librarians who have hold of them now have not used them creatively to deal with truculent visitors.

The town developed in two parts: Colne, on top of the ridge; and Waterside, at the base of the southern side of the ridge, next to the river. By 1296, a corn mill and a fulling mill had been established down by the river. Later, coal was also mined here.

By the 15th century, Colne had become a major centre for the woollen trade, in particular for the production of lightweight kersey. With the Industrial Revolution, cotton manufacturing became the main industry in the town, aided by the completion of the Leeds and Liverpool Canal in 1816, and by the arrival of the railway. By 1891 there were 30 cotton mills listed in Colne with more in the surrounding areas of Trawden and Laneshawbridge. The largest had 2,400 looms and the smallest 56.[2] 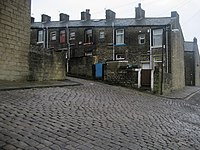 In the nineteenth century Colne grew down the two sides of the hill into what are called the North and South Valleys and towards Nelson and Laneshawbridge. The town's population declined during the 20th century, as with many Lancashire mill towns, from 26,000 in 1911 to 19,000 in 1971.[3]

Today, Colne's cotton industry has all but disappeared, although other types of industry have taken its place. Many of the old weaving mills that used to dot the landscape have either been demolished to make way for retail space, or now accommodate alternative manufacturing industries. The service sector is a growth industry, and now occupies some town centre locations. The main industrial area, Whitewalls, is on the boundary with Nelson, next to the end of the M65 motorway, and houses a range of employers - an abattoir, retail, automotive components, electronics, equipment hire and engineering/manufacturing.

The town stands on the edge of the Pennines, with views of several well-known hills. Boulsworth Hill overlooks most of the town, Noyna Hill overlooks Colne from the northeast, close to Foulridge; from there it is possible to see most of eastern Lancashire and into the Yorkshire Dales.

Arguably the most well-known local landmark is Pendle Hill. Colne is about 5 miles east of Pendle Hill, which attracts ghoulish folk and the morbidly superstitious on account of its association with the Pendle witches.

The town is also known for the British in India Museum,[4] and the Wallace Hartley Memorial, in memory of the bandmaster of the RMS Titanic who used to live in Colne and is buried in the cemetery.

Colne is on the Leeds and Liverpool Canal. North-east of Colne the canal enters a mile-long dead straight tunnel to Foulridge. At the western end of the tunnel, three reservoirs built between 1793 and 1866 feed the summit level.

Since 2004 Colne has hosted an annual Grand Prix cycle race around the town centre. It follows the half mile of the town centre one way road system. Some 2,500-4,000 local people attend the event, which is part of the British Cycling Season Championship.[6][7]

Ralph, the father of Roger Bannister the first sub-four minute miler in 1954, was born in Colne, the family having lived here for 400 years.[8]

Alkincoats Park has bowling greens, hard surface tennis courts, pitch and put golf, a children's play area and footpaths that lead to areas close to the Leeds and Liverpool Canal and the now-dismantled Colne to Skipton railway line.

The towpath of the Leeds and Liverpool Canal and the trackbed of the dismantled Colne to Skipton railway are also popular leisure destinations, as is Ballgrove Picnic Area at the eastern edge of Colne, close to Laneshaw Bridge. It is possible to walk from here to historic Wycoller.

Every August bank holiday, the Great British Rhythm and Blues Festival takes place, which attracts people and artists from all over the world over three days.[9] Many local pubs and clubs stage music gigs; others hold 'fringe' type gigs. The main focus of attention, where the larger events are staged, is the Municipal Hall close to the town centre. A second festival, the Colne Gala, has been held on most years for the last three decades, with a parade along a route through the town centre to the main Gala event at Alkincoats Park and Holt House.[10]