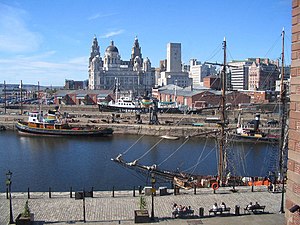 The hundred of West Derby is a hundred of Lancashire, named after the township of West Derby, now a northern suburb of Liverpool. The hundred has sometimes been known as West Derbyshire, just as other hundreds in the county palatine of Lancaster may bear the -shire suffix.

West Derby is the largest hundred in the county and covers much of its population, since it includes the City of Liverpool and the towns which surround it. With a population of 1,650,055 in 2011, it is second only to Salfordshire in population. Liverpool itself was founded only at the beginning of the thirteenth century and so is a relative youngster compared with the hundred in which it sits, which bears an older name taken from a place once greater and which has now been humbled into a suburb.

The hundred covers the whole south-west of Lancashire, containing the ancient ecclesiastical parishes of Walton, Sefton, Childwall, Huyton, Halsall, Altcar, North Meols, Ormskirk, Aughton, Warrington, Prescot, Leigh, Liverpool, Wigan, and Winwick. It is bounded on the west by the Irish Sea and in the south-west and south by the River Mersey and Glazebrook, to the east is Salford Hundred and to the north-west the River Douglas and Leyland Hundred.

Its towns then include: 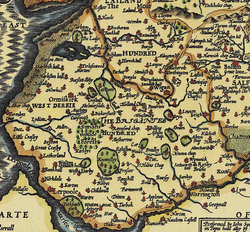 When the Domesday Book was compiled, this hundred was composed of three separate hundreds of West Derby, Warrington and Newton in Makerfield. The hundreds possibly united in the reign of Henry I.

Apart from the manor which contained West Derby Castle, said to have been built by Roger of Poitou, there were several other manors which were owned by the Lord of the manor for his own use. At the time of the Conquest these manors incorporated six berewicks encompassing the villages of Thingwall, Liverpool, Great Crosby, Aintree, Everton, Garston and Hale.[1]

Expansion of the boundaries

By the end of the 12th century the three separate hundreds had united and West Derby Castle was an important administrative centre rivalling Lancaster in the north of the county. Its position was strengthened by its proximity to the Port of Liverpool, which was founded by King John, trade with Cheshire and the passage of ferries from Liverpool to Birkenhead.

Court and laws on the hundred

A Wapentake court was held every three weeks with the steward of the hundred officiating. There had been a courthouse in West Derby for over 1,000 years since the time of the Vikings. The present courthouse situated in West Derby is from a building which was constructed during the reign of Queen Elizabeth I. The court was used for the presentation of minor offences, or breaches of any laws within the hundred.[1] The King, or lord of the manor had his own bailiff, who was the officer to the sheriff, who had the duty to ensure peace within the hundred and collect any taxes or levies from the people. From the troubled reign of King Stephen to that of Henry IV this office was a hereditary title held by members of the Walton family of Walton-on-the-Hill. By the fifteenth century the master of the forest was held by members of the Molyneux family, who also held the title of steward of the hundred.

On 18 October 1229, Henry III granted all land from the Ribble to the Mersey, including West Derby, Liverpool, the village of Salford, and the wapentake of Leyland to Ranulf Earl of Chester and Lincoln. When he died in 1232 without any heir the land was inherited by William de Ferrers, through his wife Agnes, sister of the late earl.[1] The land was then passed on to his son William, and then to his son Robert. In 1263, Robert held court against several people who had committed offences against the deer of his forest. In 1266 he rebelled against the rule of the King Henry III and was beaten at the Battle of Chesterfield, following this he was stripped of his title and land, which returned to the hands of the Crown, which was then given to Edmund "Crouchback", the King's second son, who was later created Earl of Lancaster. The title and land followed the line of descent of honour of Lancaster from Edmund until it was merged into the Crown in 1413, and is vested in the reigning monarch.

Places encompassed by the hundred of West Derby