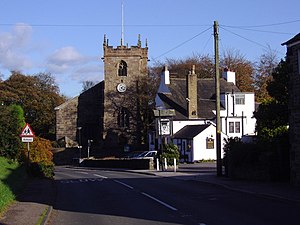 The Leyland Hundred is a hundred of Lancashire, in the middle of the county, south of the River Ribble. To the south-west lies the vast West Derby Hundred; to the east Blackburnshire and to the south-east, Salfordshire. North of the Ribble is Amounderness, and so this hundred at the heart of the shire borders every other hundred of its county other than Lonsdale. It is the least populous of the hundreds, with a population in 2011 of 223,643.

The hundred is named after the village of Leyland in the heart of the hundred, and in the manner of the hundreds of the County Palatine of Lancaster, it is sometimes known as Leylandshire. In the Domesday Book of 1086 it is recorded as the Hundred of Lailand. 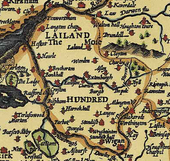 Leyland Hundred as shown on John Speed's 1610 Map of Lancashire

The Domesday Book includes Lailand in the returns for the lands Inter Ripam et Mersham alongside the Cheshire entries,[2] though it cannot be said to have been seens as part of Cheshire. Of this, Harris and Thacker (1987) observe that:

Certainly there were links between Cheshire and south Lancashire before 1000, when Wulfric Spot held lands in both territories. Wulfric's estates remained grouped together after his death, when they were left to his brother Aelfhelm, and indeed there still seems to have been some kind of connexion in 1086, when south Lancashire was surveyed together with Cheshire by the Domesday commissioners. Nevertheless, the two territories do seem to have been distinguished from one another in some way and it is not certain that the shire-moot and the reeves referred to in the south Lancashire section of Domesday were the Cheshire ones.

The Domesday Survey (1086) included south Lancashire with Cheshire for convenience, but the Mersey, the name of which means 'boundary river' is known to have divided the kingdoms of Northumbria and Mercia and there is no doubt that this was the real boundary.

The Hundred was included within the Honours of Lancaster, which became the county palatine, and today's Lancashire.