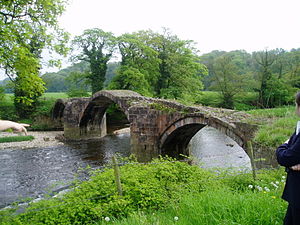 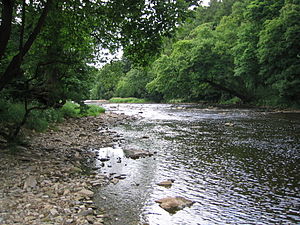 Looking towards the Yorkshire bank, near Paradise hill

The River Hodder is a river of Yorkshire and Lancashire.

It rises on the eastern slopes of White Hill in Yorkshire, close to the Lancashire border and flows for approximately 23 miles to the River Ribble, of which it is the largest tributary. The confluence of the rivers is an impressive sight, particularly when both are in spate.

The Hodder drains much of the Forest of Bowland Area of Outstanding Natural Beauty and all but the last mile of its course is through this scenic area.

The upper reaches of the river feed the large Stocks Reservoir, which provides much of Lancashire's water supply. After exiting the reservoir, the Hodder continues in a general southward direction. It collects many tributaries from the valleys of Bowland and, lower down, parts of the Ribble Valley. Most notable among the feeders of the Hodder are the Croasdale Brook; the Easington Brook; the River Dunsop; and the Langden Brook, all of which join while the Hodder is wholly in Yorkshire;. The River Loud joins from the Lancashire side. The Lower Hodder after the Burholme Bridge forms the county border all the way to the Ribble.

Much of the land in the Hodder Valley further to the north is owned by the Crown as Duke of Lancaster, whilst further down, farming land on the Stonyhurst Estate is owned by Stonyhurst College and the Jesuits. The river runs close to the College and passes adjacent to the former preparatory school, Hodder Place. The river lends its name to the pre-preparatory department at Stonyhurst, "Hodder House" and also years three to five known collectively as "Hodder Playroom".

The name Hodder is likely derived from Brythonic. Its meaning is either "pleasant stream" or possibly "boundary" (Welsh yr odre), the latter suggesting that the Lancashire/Yorkshire border has its origins in the depths of antiquity. It is thought that Bowland takes its name from the Old Norse boga- meaning a bow in a river; the Hodder being characterised by the way it meanders and twists through the Bowland landscape.

The Hodder does not pass by any major towns, but the following villages are situated along the river:

The mediæval silver Mitton Hoard was found near where this river joins the River Ribble in 2009.[2]