Heysham is a large coastal village in Lancashire overlooking Morecambe Bay, near Lancaster. It is a mixed place; a ferry port, a place of modern industry and a site of great historic interest.

From Heysham port ferries sail for the Isle of Man and Belfast. On the shore stand two nuclear power stations, and the village has been identified as a potential location for the next generation of nuclear power stations. The power stations' distinctive silhouettes serve as landmarks visible from hills in the surrounding area and from the sea, as the ancient church on the hill would have done in past days.

Above Heysham is the area known as the Barrows, which are the only sea-cliffs in Lancashire. The Barrows contain, in a relatively small area, woodland, open grassland, sandy beaches, and deep rock pools. St Patrick's Chapel ruins stand on the cliff here.

The artist J M W Turner was in Heysham in the 1790s when travelling throughout Britain. His paintings show an early Heysham village with the spectacular lakeland backdrop. 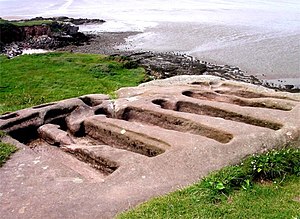 The ancient St Patrick's Chapel stands in ruins on the cliff-edge, close to the parish church, St Peter's. Its walls stand against the weather, and contain a unique Anglo-Saxon arch; in truth a single lintel carved into an arch and engraved with fluting.

In the chapel ruins are grave-holes, hewn out of solid rock into the shapes of the bodies they were to receive. The graves are thought to date from the 11th century.

Local legend has it that St Patrick landed here after crossing from Ireland and established the chapel. However it has been established that the chapel was built around 300 years after Patrick's death.

The grounds of St. Peter's Church contain many Anglo-Saxon and Viking remains, and the church itself contains a Norse hogback stone of unknown purpose or meaning. Hogbacks are found across northern Britain and Ireland wherever Vikings and Norse settlers came in strength.

Lancaster Museum holds artefacts from the area of the chapel such as stone axe and hammer heads, some weighing up to 9 lb dating back to the New Stone Age. Many of these artefacts and their original location suggest that this was an ancient burial ground, or barrow. 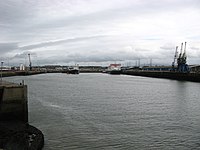 Heysham Harbour was built in 1900. From here a ferry service sails for the Isle of Man and freight sails to Belfast. The harbour also serves the gas fields of the eastern Irish Sea and Morecambe Bay.