Morecambe is a seaside resort town in Lancashire, on the coast of Morecambe Bay looking out to the parishes of the county north of the sands. Morecambe stands beside the county town; Lancaster.

The town is situated on the coast of Morecambe Bay. It was founded in the middle of the nineteenth century: the town is named after Morecambe Bay, not the bay after the town. From its foundation, the new town grew in the late nineteenth and early part of the twentieth centuries as a seaside resort.

The town of Morecambe incorporates the three distinct historic settlements of Poulton-le-Sands, Bare and Torrisholme.

In 1846, the Morecambe Harbour and Railway Company was formed[1] to build a harbour on Morecambe Bay, close to the fishing village of Poulton-le-Sands, and a connecting railway. By 1850, the railway linked to Skipton, Keighley and Bradford in the West Riding of Yorkshire, and a settlement began to grow around the harbour and railway, to service the port and as a seaside resort. The settlement expanded to absorb Poulton, and the villages of Bare and Torrisholme. The settlement started to be referred to as "Morecambe", possibly after the harbour and railway. In 1889 the new name was officially adopted.

Morecambe was a thriving seaside resort in the mid-20th century. While the resort of Blackpool attracted holiday-makers predominantly from the Lancashire mill towns, Morecambe had more visitors from Yorkshire (due to its railway connection) and Glasgow. Between 1956 and 1989 it was the home of the Miss Great Britain beauty contest.

Morecambe suffered from decline for a number of years after a series of incidents that affected its tourism and local economy.[2] Two piers were lost: West End Pier was partly washed away in a storm in November 1977 and the remnants demolished 1978 while Central Pier, though struck by fire in 1933, survived until 1992. In 1994, The World of Crinkley Bottom attraction in Happy Mount Park closed only 13 weeks after opening and the ensuing 'Blobbygate' scandal led to a legal battle between Lancaster City Council and TV star Noel Edmonds. The closures of Bubbles, Morecambe's swimming pool, and Frontierland, a fairground, soon followed.

Concern over the decline of Morecambe's West End led to regeneration and investment in the area. The Times and the Daily Telegraph ran features on Morecambe's revival around Easter 2006. After falling into abeyance in the mid-1980s, the Miss Morecambe beauty contest was revived in 2006 by Margee Ltd, a local fashion store, founded in 1933 – the same year that the second Midland Hotel opened.

Morecambe was selected by the RNLI as the location for its first operational life-saving hovercraft, (Griffon 470SAR) H-002 "The Hurley Flyer", which was made operational on 23 December 2002. Housed in a temporary garage next to the Yacht Club until a permanent building could be designed and built. Building work started in 2008 and officially opened on the 12th June 2010.[3] 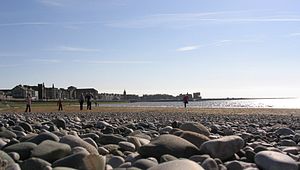 Enoch Powell made a speech in Morecambe on 11 October 1968 on the economy, setting out alternative, radical free-market policies which would later be called the 'Morecambe Budget'.[4] It was a radical reappraisal of Government spending, rejected at the time but whose themes have since been taken into the mainstream.

Powell used the financial year of 1968-9 to show how income tax could be halved from 8s 3d to 4s 3d in the pound (basic rate cut from 41% to 21%)[5][6] and how capital gains tax and selective employment tax could be abolished without reducing expenditure on defence or the social services. These tax cuts required a saving of £2,855 million, and this would be funded by eradicating losses in the nationalised industries and denationalising the profit-making state concerns; ending all housing subsidies except for those who could not afford their own housing; ending all foreign aid; ending all grants and subsidies in agriculture; ending all assistance to development areas; ending all investment grants;[7] abolishing the National Economic Development Council and abolishing the Prices and Incomes Board[8] The cuts in taxation would also allow the state to borrow from the public to spend on capital projects such as hospitals and roads and on the firm and humane treatment of criminals.[9] 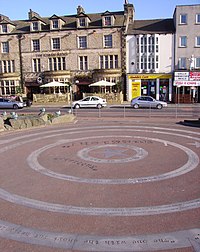 Morecambe is primarily a seaside resort with a large proportion of the local economy based on tourism, hospitality and catering located along the seafront. It is also situated at the foot of the Lake District National Park.

Legal and other professional services are concentrated on Northumberland Street and Victoria Street. 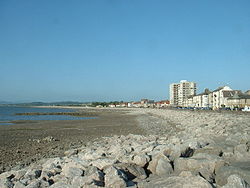 Morecambe has two large live music venues, the Platform and the Hothouse. The Platform is a converted Victorian-styled building which used to be the old railway station. It also houses the Morecambe Tourist Information Centre. Morecambe has a number of bands playing in the town's pubs and music venues.

Morecambe is home to community music charity More Music. Based in The Hothouse and established in 1993. More Music seeks to build confidence and spirit in individuals and communities through the arts, especially music. The Hothouse is now a venue for live gigs from a wide variety of national and international artists, including Roddy Woomble, Rae Morris and Grand Union Orchestra.

Morecambe was the birthplace of the artist William Woodhouse (1857-1939), who lived all his life in the town and is buried with his wife and daughter at St Peter's Church in the village of Heysham, a little to the south of Morecambe.

One of Morecambe's most famous landmarks is a statue commemorating one of its most famous sons, Eric Morecambe. It was created by sculptor Graham Ibbeson. Eric commemorated the town on the Morecambe and Wise amongst other things by saying he would be holidaying in "Morecambé-en-Sée.

One of Morecambe's landmark buildings is the partially renovated Victoria Pavilion (spelt incorrectly on the mosaic tiles at the entrance to the theatre), popularly known as Morecambe Winter Gardens. This was once a venue for swimming baths, a grand theatre, a restaurant and a ballroom, and even became a training camp at various times in its life.

Morecambe Library opened in 1967, and was designed by the office of the architect Roger Booth. It replaced the library on Victoria Street which opened in 1928. There had been earlier proposals to build a library in Morecambe with Carnegie funding, but arguments about the rates involved stalled the project; instead, one of the Aldermen spent his money on building the Clock Tower on the seafront. The library is mentioned by Pevsner, and is one of the few buildings not connected to the seaside trade to get a mention apart from churches. The building is formed by hexagons, with a hyperbolic parabolic roof, creating a distinctive skyline and *interior.

Morecambe once boasted two fairgrounds: a small one to the north of the railway station which closed down in the 1980s, and a larger one to the south of the station, which ultimately became Frontierland and closed in 1999. The only remaining landmark left on the site is the Polo Tower, left standing only because of the contract for the phone mast on top.[10] The future of the remaining land remains uncertain.

In July 2008, the local council ordered a clean up of the Polo Tower and scaffolding was erected around the structure to carry out a survey.

Near the promenade is the Morecambe and Heysham War Memorial which commemorates the men of Morecambe who lost their lives in the two world wars and the Korean War.[11]

The Midland Hotel is an important art deco luxury hotel situated along the seafront. It still contains interior design and art pieces by artist Eric Gill. It underwent a £7m restoration, headed by Manchester company Urban Splash and opened for business in June 2008.

Morecambe Bay has some of the most varied fishing in all of Britain...and is perhaps most famous for Morecambe Bay Potted Shrimps which are 'By appointment to Her Majesty The Queen'.