The Old Man of Coniston or Coniston Old Man is a fell in the Furness Fells in northern Lancashire. At 2,634 feet high it is the highest point of Lancashire, albeit not without challenge from neighbouring Swirl How.

The Old Man stands to the west of the village of Coniston and the lake of the same name, Coniston Water. It is a popular with tourists and fell-walkers with a number of well-marked paths to the summit.

The mountain has also seen extensive slate mining activity for eight hundred years and the remains of abandoned quarries and spoil tips are a significant feature of the north east slopes. However apart from the industrial debris, the fell bears yet the wild beauty of the Lake District and affords fine views across Lancashire North of the Sands. Its slopes are grazed by the flocks of several farms.[1]

Questions over which is highest

The Old Man is recognised as the highest point in Lancashire. However, this status rests upon its being higher than its near northern neighbour, Swirl How. Now though questions have been raised about the relative heights of these two fells, and current books differ as to whether the height of Swirl How is 2,631 feet or 2,638 feet, following resurveying. If modern measurement has not in fact added two yards to its rival then The Old Man of Coniston is yet the highest point in the Furness Fells and all Lancashire.[2]

The Old Man of Coniston from Ulverton, Lancs

The Furness Fells form the watershed between Coniston Water in the east and the Duddon valley to the west. The range begins in the north at Wrynose Pass and runs south for around 10 miles before petering out at Broughton in Furness on the Duddon Estuary.

Alfred Wainwright in his influential Pictorial Guide to the Lakeland Fells took only the northern half of the range as Lakeland proper, consigning the lower hills southward to a supplementary work The Outlying Fells of Lakeland. Later guidebook writers have chosen to include the whole range in their main volumes.[3][4]

The central part of the Coniston range can be likened to an inverted 'Y' with Brim Fell at the connecting point of the three arms. The main spine of the ridge runs north over Swirl How and Great Carrs and south west to Dow Crag and the lower hills beyond. The third arm is a truncated spur, running only half a mile to the summit of the Old Man before tumbling away south eastward to the valley floor. This ridge end position gives the fell a sense of isolation and increased stature, with steep faces on three sides.

To the west is the deep trench containing Goat’s Water. This elongated tarn has a depth of about 50 feet and contains trout and char. Enclosed by high ground, it has an outlet to the south through a field of boulders.[5] This is one of the headwaters of Torver Beck, which passes a disused quarry near the Tranearth climbing hut, keeping the workings topped up by way of an artificial but extremely picturesque waterfall. The stream finally issues into Coniston Water to the south of Torver village.[3]

The southern and eastern flanks of The Old Man are composed of rough ground, deeply pockmarked by slate quarries. One of these quarries, Bursting Stone, is still operating to produce an olive green slate. Across the southern slopes runs the Walna Scar Road. This was the original trade route between Coniston village and the settlements of the Duddon Valley and is a public byway open to all traffic.[6]

The first section rising steeply from Coniston is a metalled road, maintained partly to provide access to the quarry. This leads to a car park at an altitude of 740 feet, a popular starting point for climbs. Beyond here motor vehicles are prohibited, but the track continues to its summit at 2,000 feet, crossing the ridge to the south of Dow Crag.

Coniston Old Man has no connecting ridges other than that to Brim Fell, but a discernible rib falls due east via Stubthwaite Crag and Crowberry Haws. Below the tourist route path, this rib climbs again to The Bell, a fine rocky top (1,099 feet) with excellent views of the lake and village.[3]

Nestling beneath the northern face of The Old Man, and cradled between it and Raven's Tor, is Low Water. This fine corrie tarn has been dammed in the past to provide water for the quarries, but all of its water now issues via a fine cascade of falls into the Coppermines Valley. This area, shared with the neighbouring fells of Brim Fell and Wetherlam, is heavily scarred by historic copper, nickel and cobalt mining, particularly in the latter half of the 19th century.[5][7]

The summit of the fell carries a unique construction, a combined slate platform and cairn. The popularity of this climb has resulted in the resident sheep being quite tame, and they show no fear in rifling unwatched bags for food. The extensive view from the summit on a clear day includes much of the southern Lake District, Morecambe Bay, Blackpool Tower, Winter Hill, the Lancashire coast and the Isle of Man. Perhaps the highlight is the close up view of Dow Crag.[3][8] 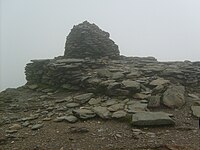 The fell is normally climbed from Coniston village by way of Church Beck and the mines (the tourist route). Alternatives include the south ridge and the path to Goat's Water, both ascending from the Walna Scar Road. The carpark at the top of the metalled section provides a headstart for these routes. The Walna Scar Road can also be reached from Torver, or from Seathwaite in the Duddon Valley, although the latter results in an indirect climb via Dow Crag.

In 2006, London writer Kris Griffiths' attempt to climb The Old Man of Coniston for the first time almost ended fatally after getting trapped in the dark on his descent [9]

Coniston has been Lakeland's centre for slate and copper mining for 500 years. The well known ‘Coniston copper mines’ are reputed to be some of the largest copper mines in Britain, with a vertical distance of around 2,000 feet.

The nearby slate mines on the North East flank of the Old Man, are known as "Old Man Quarries", though sometimes given the individual names of: Brandy Crag, SaddleStone and Moss Head. These slate mines have been worked since at least the 13th century. All the workings are more or less underground, apart from Low Brandy Crag, which was opened out into an opencast quarry in the 1980s by Burlington Stone, and is still operating today. Most of the lower levels in Saddlestone are blocked, though the Moss Head Quarries are still open.[1]

A band of the dacitic lapilli-tuffs of the Lag Bank Formation crosses the summit. The southern slopes show the volcaniclastic sandstones of the Seathwaite Fell Formation, while the rhyolitic tuffs of the Paddy End Member stretch from north of the summit toward the Coppermines.[10]

It is a commonly held belief among locals that Coniston Old Man belongs to the oldest man who is a resident of the village of Coniston, although there is no legal basis to this.