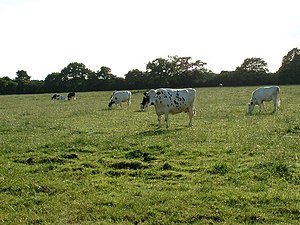 Amounderness is a hundred of Lancashire, containing the lands of that county lying north of the River Ribble and south of Morecambe Bay and the River Lune, form the coast of the Irish Sea up to the Yorkshire border at the Forest of Bowland. It includes the whole of the Fylde and parts further inland and has a total population of 468,488. 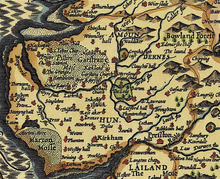 The name of Amounderness preceeds the organisation of hundreds and indeed Lancashire itself. The Domesday Book in 1086 spells it Agemundrenessa.[1]

There are two suggested etymologies for Amounderness. The traditional 19th-century reading was that the name derived from ac (oak) and mund (protection), "a ness or promontory sheltered by oaks".[2] This was given currency by Porter.[3]

A more recent view is that the area is named after one Agmundr, a Norse chieftain (some have identified him with the Norse warlord of that name who died at the Battle of Tettenhall in August 910, or a namesake who died in a more local battle in the same age.)[4] Partington's early 20th century description of "Amounder ... the first Viking who settled in the Fylde country" now being considered more fanciful than historically accurate.[5] 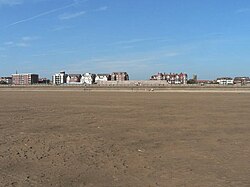 The beach at St Annes on Sea

In The Place-names of Lancashire, Ekwall supports an early 10th-century coinage citing A[g]hemundesnes and the late 11th century Agmundrenesse.[6]

Victorian commentators, such as Porter, often cited a 7th-century grant made at Ripon by Ecgfrith of Northumbria and Ælfwine of Deira as proof that Amounderness existed before the 10th century.[3] In fact, the grant itself has not survived, its only source being an early 8th-century hagiography of the Northumbrian bishop Wilfrid - Vita Sancti Wilfrithi - by Stephen of Ripon (also known was Eddius Stephanus).[7] There is no reference to Amounderness in this text, merely to lands "iuxta Rippel" (next to the Ribble). The historical misattribution may be due to the 16th-century antiquarian John Leland who cites Hasmundesham (possibly Amounderness) in his Collectanea, originally published in 1632, but does so without proper supporting evidence.[8]

Amounderness was granted to Wulfstan I, Archbishop of York in June 934 by Æthelstan King of the English. A spoil of battle, the area had been annexed in 926. According to the grant, the extent of Amounderness was much greater than its present-day counterpart being the land "from the sea along the Cocker to the source of that river, from that source straight to another spring which is called in Saxon, Dunshop, thus down the riverlet to the Hodder, in the same direction to the Ribble and thus along that river through the middle of the channel to the sea".[9]

Ekwall corroborates this talking of the eastern boundary of Amounderness as "being formed by the fells on the Yorkshire border".[6] This places the boundary within the modern-day Forest of Bowland where Dunsop Bridge sits close to the eastern mouth of the Trough of Bowland that straddles the traditional Lancashire-Yorkshire border. After the Norman conquest of England, this eastern portion of Amounderness became part of the Lordship of Bowland.

In the 10th century, Amounderness would have been strategically important in terms of the Dublin-York axis. Its strategic importance is mirrored on the east coast by Holderness in the East Riding of Yorkshire.[10]

By the 12th century, Amounderness and Bowland had become two distinct and separate Lordships, each centred on its own seigneurial, later royal forest.

In his 1858 novel Mervyn Clitheroe, William Harrison Ainsworth portrays the minor character of the Earl of Amounderness whose "sylvan domains ... at Dunton Park ... boasted much noble timber".[11] Ainsworth's protagonist Mervyn Clitheroe shoots a buck "in the domains of Lord Amounderness."[12]

Amounderness comprises the ancient parishes of: