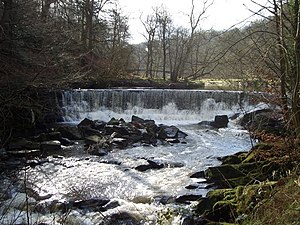 Weir on the Darwen

The River Darwen is a river running through Darwen and Blackburn in the midst of Lancashire.

The heavy industry of Blackburn and of Darwen left the river seriously polluted with human and industrial effluent during the Industrial Revolution, and up to the early 1970s. The river often changed colour dramatically as a result of paper and paint mills routinely using river water to flush out dye and paint tanks.

This has now ceased and the river is relatively clear with the return of trout and small fish.

Rising in Jack's Key Clough at the confluence of two streams from Bull Hill and Cranberry Moss, the river flows through the town of Darwen, continuing into the suburbs of Blackburn past Ewood Park. The river passes below the Leeds and Liverpool Canal at Ewood Aqueduct and is culverted again at Waterfall and near Griffin Park. It is joined by the River Blakewater near Witton Country Park in Blackburn and leaves the mostly urban landscapes of the towns behind, flowing through parklands and valleys. A further tributary, the River Roddlesworth, joins the Darwen at the bottom of Moulden Brow (the name Moulden Brow being associated with Moulden Water, an alternative name for this stretch of the river).

From Moulden Brow, the Darwen flows past Hoghton Tower through Hoghton Bottoms and Samlesbury Bottoms, finally entering the River Ribble at Walton-le-Dale.

At Walton-le-Dale, the river was the backdrop the Battle of Preston in 1648 during the Second Civil War. Preston was a Parliamentarian victory immortalised in John Milton's poem "To Cromwell": -

While Darwent Streams with Blood of Scots imbru'd...

In this poem, the river appears to be named "Darwent," giving evidence of its derivation from a [[British language dialect form similar to the Old Welsh derwenyd (Modern Welsh derwenydd), meaning "valley thick with oaks".