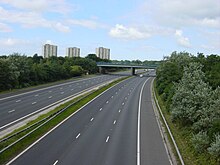 View of the M57 northwards from the bridge on Knowsley Lane. On the left can be seen the three tower blocks of Stockbridge Village

The M57, also known as the Liverpool Outer Ring Road, is a motorway in Lancashire. Designed as a bypass road for Liverpool, it is 10 miles long and links various towns east of the city, as well as the M62 and M58 motorways.

Starting at the Tarbock Interchange in Tarbock, at the end of the A5300, the motorway heads north to the east of Huyton and west of Prescot and crosses the Liverpool and Manchester Railway. It then runs across the north east of Huyton before running west of Knowsley Village. After meeting the A580 at a split junction (numbered 4 & 5), it continues north west between Fazakerley and Kirkby, passes under the Kirkby and Ormskirk branches of the Merseyrail Northern Line before ending on Switch Island near Aintree. The motorway provides one of the main access routes to Aintree Racecourse.

The M57 was planned to be a complete bypass of Liverpool, meeting each of the main roads out of the city.[1] As is normal in the United Kingdom, the M57 was to be built in stages. The first two opened were:[2]

Phase 1 was proceeded with more rapidly as there had been industrial growth in the area, and it was considered important to improve traffic connections as soon as possible.[3] The original plans for the route anticipated an extension south to the A562.[3]

At Switch Island, the junction was constructed to allow an extension of the M57 towards the A565 near Thornton and the end of the M58 had provision for slip roads to that extension to be constructed.[4] Contemporary maps also showed a proposed southern extension, eventually constructed in the 1990s as the A5300.[5] A new road was opened in August 2015 to join the A565 at Thornton to Switch Island junction at the M57 and M58 motorways respectively; the road was appropriately named the A5758.