Chorley is a market town in Lancashire, one of the many towns in the county to be a busy hub of the Industrial Revolution, which given the town its shape, and while the furnaces of the factories no long burn as once they did, its factory heritage is visible and industry has not wholly fled.

The town is found 8 miles north of Wigan and 20 miles north-west of Manchester.

As in much of Lancashire, the town's wealth came principally from the cotton industry. As recently as the 1970s the skyline was dominated by numerous factory chimneys, but most are now demolished: remnants of the industrial past include Morrison's chimney and a few other mill buildings, and the streets of terraced houses for mill workers.

Chorley is known as the birthplace of the Chorley cake. 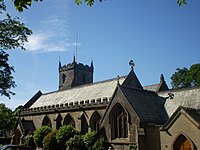 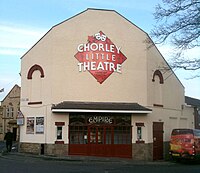 The town has two markets, the Flat Iron Market and the Covered Market. For one weekend each year, French market traders sell their produce in the town, and Chorley's merchants return the favour in France. The market has a number of specialist cheesemongers who purvey the local Lancashire cheese in various forms. Chorley is also famous for its famous Chorley cake.

Chorley has a civic society. It has two historical societies, the Chorley Historical and Archaeological Society and the Chorley and District Natural History Society.

Chorley Little Theatre was built as one of the town's first electric cinemas in 1910, it has been owned and operated by volunteers from Chorley Amateur Dramatic and Operatic Society (CADOS) since 1960. The society put on at least six productions a year (typically four plays, a pantomime, and a musical) and shows by Chorley Youth Theatre and big-screen films from Chorley Empire Community Cinema. It underwent refurbishment in 2010 and hosts touring comedy and music shows from old and new acts.

The Arts Partnership is a youth arts charity that operates from their own venue on Railway Street in the town centre. They run a number of arts and creative schemes with a diverse range of young people. The murals at the railway and bus stations were produced as part of projects from the registered charity.

Cedar Farm Galleries in Mawdesley houses a number of artist's studios, retail stores and an on site restaurant.

A wide view over Chorley from Healey Nab

The principal river in the town is the River Yarrow. The Black Brook is a tributary of the Yarrow. The River Chor runs not far from the centre of the town, notably through Astley Park; its name is a back-formation from "Chorley".

Chorley effectively forms a conurbation with Preston and Leyland and was once proposed as being designated part of the Central Lancashire New Town under the New Towns Act,[1] a proposal which was eventually scaled back.[2]

Bronze Age traces have been found on the hills, the earliest from 3500 BC found on Anglezarke Moor at Round Loaf: a pottery burial urn. A Roman road ran near Chorley towards Wigan and at Brindle to the north of the town some Roman remains were discovered in the late 1950s.

During 1442 a local noble named Sir Rowland Standish, who had fought at the Battle of Agincourt, brought back to Chorley the reputed skull and bones of St Lawrence O’Toole, a 12th-century Bishop of Dublin who died in Normandy, and interred the grisly relics at an altar at the parish church, which was thereafter named St Lawrence's. St Laurence’s remains the parish church. The bones were disposed of in the Reformation during the reign of King Henry VIII.

An apocryphal story tells that King James I visited Hoghton Tower a large stately home to north east of the town and after a good meal knighted his loin of beef “Sirloin”. It is a story however told of so many places and ages that it must remain a fond legend.

Astley Hall is a more central stately home, set in the middle of the town's largest park, Astley Park. Oliver Cromwell visited here on his travels through Lancashire.

In November 1745 the Yong Pretender (“Bonnie Prince Charlie”) and his Jacobite army passed through Preston and Wigan on their way south to Manchester and Derby in the hope of taking London and the Crown. On 27 November, Chorley was a mustering point for the Government scouts tracking them. The Prince and his Army marched through Chorley itself on 10 December on the retreat, back to Carlisle and thence the Highlands and on to their dreadful day of destiny on Culloden Moor near Inverness the following 16 April. There was some local support in the town for the Jacobites, for Chorley, like other Lancashire towns, had a considerable number of Roman Catholics. 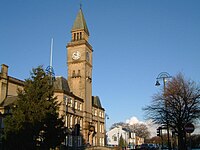 Chorley, like most Lancashire towns, gained its wealth from the industrial revolution of the 19th century which was also responsible for the town's growth. Chorley was a vital cotton town with many mills littering the skyline. Today only three mills still remain working.

Also Chorley in its location on the edge of Lancashire Coalfield was vital in coal mining. Several pits existed in Duxbury Woods, the Gillibrand area and more numerously in Coppull. Chisnall Hall Colliery at Coppull was considered the biggest Lancashire pit outside of Wigan and one of many located in the Chorley suburb. The last pit in the area to close was the Ellerbeck Colliery in 1987 which was located south of Chorley, between Coppull and Adlington.

The town played an important role during the Second World War, when it was home to the Royal Ordnance Factory, a large munitions manufacturer in the village of Euxton about two miles from the town centre. A smaller factory was also built near the Blackburn-Wigan railway line in Heapey.

In the 1970s Chorley was designated as part of Central Lancashire New Town, together with Preston and Leyland. The original aim of this project was to combine the three settlements into a single city with a population of around half a million. Although this never came to pass, and the project has since been abandoned, Chorley benefited from the urban renewal commonly associated with new towns. Examples include a bypass of the town centre, and the Market Walk shopping centre. 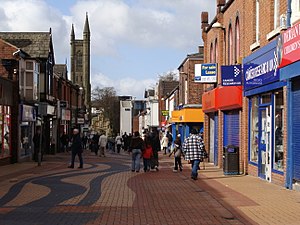 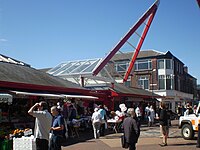 The first signs of industry as with many towns in Lancashire was mining, evidence of which can be seen by the various abandoned quarries on the outskirts of the town. One of the most beautiful of these is Anglezarke Quarry, found between Chorley and Horwich. A lot of remnants can be found of mining including the old railway bridge belonging to the Duxbury Mine on Wigan Lane, eventually the mining industry was surpassed by cotton mills which litter the town scape with Chimneys (one of the few remaining examples in the one that stands at the town's Morrisons).

Another industry in Chorley has been the manufacture of trucks which it inherited from Chorley's neighbouring town of Leyland. The large factory on Pilling Lane was used heavily for the manufacture of trucks and during the Second World War' military trucks and tanks. The factory eventually went on to spares manufacture up until the collapse of Leyland DAF in the 1990s. The works emerged as a central parts depot for the Multipart firm which eventually would come part of the RAC. The plant was closed in 2006 and work was moved to a new smaller site on Buckshaw Village. The Pilling Lane site has now been demolished to make way for new homes.

Another major industry was the manufacture of ammunition and armaments. During the 1930s one of Britain's biggest such factories to build these products was built at Euxton. The site known as ROF Chorley was vital in the Second World War and during that time over 40,000 people worked at the site. It is also the site where the bouncing bomb was built. The Nazis tried to bomb the site but could not find it as the roofs at the time were painted green, matching the surrounding grass-lands and making it very hard to spot from an aeroplane. After Second World War, production was reduced, and the final part of the site was closed in 2008 by BAE Systems.[3] A large part of the site has been redeveloped for residential and industrial use as Buckshaw Village.

Today many of the town's residents work in Manchester, Preston and nearby towns Bolton, Blackburn and Wigan. Leyland Trucks and BAE Systems are the Central Lancashire area's largest employers at their sites in Leyland and Samlesbury respectively.

Companies with a presence in and around Chorley:

Chorley town centre is the main location of shopping facilities in the town. The town centre in recent years has seen the new Market Walk development and the building a new town centre supermarket.

The town is also famous for its market heritage and is quoted as "Lancashire's market town". The outdoor market which has run for over 200 years, takes place every Tuesday on the Flat Iron. There is also a covered market place in the Market Square.

As well as these, Chorley has seen development out of town including retail parks. Chorley also has branches of three of the four big supermarkets. Further to this Chorley was the starting point for The Chorley Group with their flagship dealership Chorley Nissan, a motor group with dealerships across Lancashire. 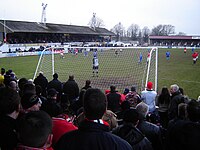 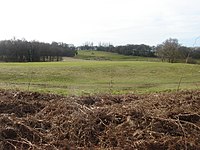 Nationally Chorley is often portrayed as a barometer of public opinion, especially during political campaigns as it has both a large rural and urban mix.

Chorley has two local newspapers: the weekly paid-for Chorley Guardian and the free Chorley Citizen. A British comedy television show, Phoenix Nights, cited Chorley's radio station, Chorley FM, whose slogan was "Coming in your ears". Chorley does have a radio station, (which is unconnected to the TV Series) The station based in Chorley originally broadcast for only a few weeks, but in 2005 received a licence to broadcast from Chorley Community Centre.

As well as Phoenix Nights, comedian Dave Spikey based his comedy series Dead Man Weds on, and filmed most of it in, Chorley. Steve Pemberton, the creator of The League of Gentlemen, based most of its characters on folk from Adlington. 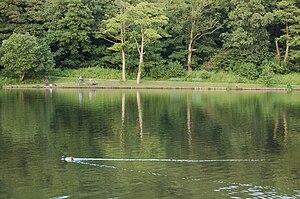 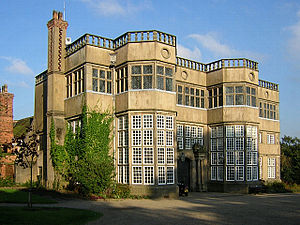