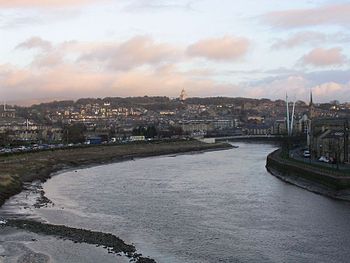 The River Lune in Lancaster

The River Lune is a river in Westmorland and Lancashire, some 44 miles from birth to sea. It forms a dale in both shires known as Lonsdale, which has given a name to the Lonsdale Hundred of Lancashire.

The River Lune is formed at Wath, in the parish of Ravenstonedale in Westmorland, at the meeting of Sandwath Beck and Weasdale Beck. It then passes the remnants of a Roman fort near Low Borrowbridge at the foot of Borrowdale, and flows through Westmorland, entering Lancashire just south of Kirkby Lonsdale.

In Lancashire, Lonsdale broadens. The river continues its southward course, receiving the waters of the Leck Beck near Whittington, at which confluence are the remains of a Roman fort. The course of the Lune becomes wider and more meandering below this point and drifts westward, taking in the River Greta below Tunstall and the River Wenning at Hornby.

After passing under the M6 motorway, the Lune enters Lancaster, the county town, and becomes tidal at the weir in the city centre. It flows thence east then sweeps south and enters Morecambe Bay at Plover Scar, and the Irish Sea across the broad sands of the bay.

On the course of the Lune

The valley of the Lune has three parts. The northern part between its source and Tebay is called Lunesdale. Below this is the spectacular Lune Gorge through which both the M6 motorway and the West Coast Main Railway Line run. Below the gorge, the valley broadens out into Lonsdale.

Bridges over the Lune include the Devil's Bridge near Kirkby Lonsdale and the Lune Millennium Bridge in Lancaster. At Caton, about five miles upstream of Lancaster, there is a cluster of three bridges (one stone road bridge and two disused iron rail bridges now used as foot/cyclepaths) at the Crook o' Lune. Here in a 180-degree right-hand bend the Lune turns back on itself; this is followed by a 90-degree left-hand bend forming the shape of a shepherd's crook and creating a beauty spot which was painted by J. M. W. Turner.[1]

The Lune is now tidal only below Skerton Weir in Lancaster. Four bridges in close proximity cross the estuary in Lancaster: Skerton Bridge (road), Greyhound Bridge (built as rail but now carries a road), Lune Millennium Bridge (pedestrian and cycle) and Carlisle Bridge (carrying the West Coast Main Line railway, and with a public walkway on the eastern side) which is the furthest downstream of the bridges. A Lancaster western bypass has been under discussion for many years. If it ever proceeds, a new bridge would be built downstream from Carlisle bridge. This part of the Lune is also the site of the old Port of Lancaster, probably a port from Roman times; the Lancaster Port Commission was established in 1750[2] to improve navigation on the estuary. Between 1750 and 1767, St George's Quay and New Quay were built in Lancaster and in 1779 the port facilities were extended closer to the Irish Sea at Glasson Dock.

The river is a County Biological Heritage Site.

There are these theories about the name "Lune". It appears to predate the Coming of the English, as the Roman name for Lancaster appears to begin ‘’Lon-‘’ (we have the first letters only, on a broken milestone). The main theories are: