Darwen is a market town in Lancashire, standing just south of Blackburn. It is known locally as "Darren", and its residents are known as "Darreners".

The main road through Darwen is the A666 towards Blackburn to the north and Bolton to the south, and ultimately Manchester.

The town stands on the River Darwen, which flows from south to north and is visible only in the outskirts of the town, as within the town centre it runs underground.

Most authorities trace the name 'Darwen' to the British language derw, meaning "oak" (as indeed it still does in Welsh), originally applied to the river; an etymology supported by an older form of the name, Derewent (1208).[1]

Darwen is a quintessential Lancastrian town in the south-east of the county. Its position in the West Pennine Moors makes its topography relatively arid and it stands within a valley with the River Darwen flowing at its base. The river passes through the town from south to north, subsequently joining the River Ribble, one of the longest rivers in Lancashire. The town is mainly accessible from the north (Blackburn) and south (Bolton) by the A666 road. Its weather conditions made it perfect for cotton weaving and as a result it became one of the largest mill towns in Lancashire.

The Guinness Book of Records mentions that Darwen had one of the largest flash floods in the United Kingdom.

The area around Darwen has been inhabited since the early Bronze Age, and the remains of a barrow from approximately 2000 BC have been partially restored at the Ashleigh Barrow[2] in Whitehall. Artefacts including a bronze dagger and urns containing human ashes were found, and a small number of these finds are now on display at Darwen Library Theatre. The Romans once had a force in Lancashire, and a Roman road is visible on the Ordnance Survey map of the area. Mediæval Darwen was tiny; little or nothing survives. One of the earliest remaining buildings is a farmhouse at Bury Fold, dated 1675.[3] Whitehall Cottage is thought to be the oldest house in the town, and was mostly built in the 17th and 18th centuries but contains a chimney piece dated 1557.[4][5]

Like many towns in Lancashire, Darwen was a centre for textile manufacture during the Industrial Revolution. Samuel Crompton, inventor of the spinning mule, lived there for part of his life.[6] Rail links and the Leeds-Liverpool Canal arrived in the mid-19th century. The most important textile building in Darwen is India Mill, built by Eccles Shorrock & Company. The company was ruined, however, by the effects of the Lancashire Cotton Famine of the 1860s.

Much of the town was built between about 1850 and 1900; placenames, date stones in terraces, and the vernacular architecture of cellars, local stone, locally-made brick, pipework and tiles and leaded glass, the last now mostly gone, reflect this. It was one of the first places in the world to have steam trams. The arrangement of town hall, market, public transport, eating/hotel facilities and the pre-suburban mixed-size vernacular housing, with local variations according to topography, is very characteristic of northern England. The year 1900 perhaps represents the peak of Victorian optimism in the area. The working classes were then much more identifiable as masses than now. George Orwell, for example, described the sound of clogs on cobblestones of the large number of female millworkers. The rise of the Labour Party from about 1900 coincided with a decline in the Liberal Party, which followed the Manchester School in economics, increasingly seen as permitting exploitation. However, Darwen usually voted for the Conservative Party until the 1970s. 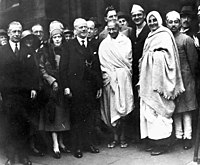 Andrew Carnegie financed a public library here; the town also had an art and technology college and a grammar school. In common with many northern nonconformist towns, there are many chapels of assorted denominations.

One of Darwen's biggest claims to fame is that it hosted a visit from Mohandas K Gandhi in 1931. He had accepted the invitation[7] from Corder Catchpool, manager of the Spring Vale Garden Village Ltd,[8] to see the effects of India's boycott of cotton goods. The unemployed mill workers greeted the man with great affection although in the event he did not reverse his boycott as they had expected and Lancashire's mill towns remained mired in unemployment and poverty.

India Mill is now home to many companies, including Brookhouse (producers of aeroplane parts) and Capita Group, which runs TV licensing. Since the 1950s, the textile industry has strongly declined in the region, although many industrial buildings from the period survive, now used for other purposes. India Mill and its famous chimney have been sold in a £12 million deal. Among Darwen's other famous industries are Crown Paints, formerly Walpamur Paints,[9] the earliest British paint manufacturer, which actually named one of its paints 'Darwen Satin Finish'. Crown Wallpaper manufactured wallpaper, Lincrusta and Anaglypta in the town. ICI Acrylics (now called Lucite International) was where acrylic glass (Perspex for windows and signage, and Sani-ware or Lucite used for the maufacture of baths and shower trays) was invented; it is still manufactured in two separate plants within the town. Spitfire canopies and (later) coloured polythene washing-up bowls were first made here. 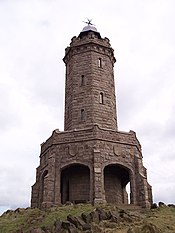 In 1897 the town council met to deliberate how best to celebrate the Queen Victoria Diamond Jubilee. The idea of building the Jubilee Tower, in conjunction with public access to the moors, was put forward. A competition to design the tower was won by Ralph Ellison from the borough engineer's department and on 22 June 1897 work began. On 24 September 1898 the opening ceremony was held, attended by over 3,000 people. Present at the ceremony were Councillor Alexander Carus, Mayor Charles Huntington, the High Sheriff of Lancashire and Lord of the Manor Rev. W.A. Duckworth.

The tower, which is open to the public, overlooks the town from the moors and stands at an altitude of 1,227 feet and has a height of 85 feet. A spiral staircase leads to the top from where, on a clear day, Blackpool Tower, the Isle of Man, Denbighshire and the Furness Peninsula can be seen. In November 2010 the dome of the tower was torn off by strong winds, and was restored in January 2012.[10]

Originally situated in the Peel Street Baths (now the Co-operative supermarket in the Circus), the library was transferred to the new technical school building in 1895.[11] Today Darwen Library stands at the corner of Knott Street and School Street to the north of the Circus. It was commissioned by Andrew Carnegie, a migrant from Fifeshire to the United States who made his fortune as a producer of iron and steel. He donated £8,000 in response to a speculative appeal for funds by the Library Committee. The opening took place on 27 May 1908 and was attended by Mayor Councilor G.P. Holde, Councillor Ralph Yates and Carnegie himself, The library has served the town ever since, with the original lecture hall being transformed into the Library Theatre in June 1971.[11]

The Market Hall was opened on 11 July 1882 and the clock tower was added in 1899, when Dr. Ballantyne became mayor. In the 1930s part of the market ground was made into the town's bus station and still remains today. In 1992 a three-day market was introduced. Although local government proceedings were transferred to Blackburn in the 1970s, the council chambers remained in the building, and were used by the magistrates' court from 1983 until 1992. The town hall currently houses offices of Blackburn with Darwen Borough Council and the local Neighbourhood Policing Team, and five shop units opened in 2011, and is a venue for meetings of the Darwen Town Council established in 2009.[11][12][13][14][15]

In the Lancashire dialect, the name Darwen is pronounced Darren, and the locals refer to themselves as Darreners. They are generally resistant to any attempts at submerging the identity of the town within Blackburn.[16]

The town is the home of the Darwen Library Theatre (an extension to the library), and the TV show Hetty Wainthropp Investigates.

Darwen has a few footnotes in entertainment history: its theatre (now demolished) had appearances by Charlie Chaplin, and it featured in a film by Norman Wisdom. George Formby's wife was from Darwen.

The Beatles played in Darwen on Friday 25 January 1963, at the Co-operative Hall. They headlined the "The Greatest Teenage Dance" which was commissioned by the Darwen Baptist Youth Club. Support acts included The Electones, The Mike Taylor Combo and The Mustangs with Ricky Day.

Darwen Live (formerly Darwen Music Live) is a free two-day music festival held each year over the second bank holiday in May. The main stage is built outside the town hall, and other smaller music stages are usually based around the town in pubs and bars. The festival has attracted artists such as The Buzzcocks and China Crisis, as well as being a showcase for local bands.[18]

Darwen has a brass band, named 'Darwen Brass'.[19] Formed in 2007, the band, under MD Steve Hartley, has enjoyed many notable successes in contesting, including 4th section wins throughout the North West. .[20] In 2012, Darwen Brass qualified for the National Brass Band Championships, finishing 5th. [21] The band was promoted to the 3rd section from the start of 2013.

The town was the home of Darwen Football Club, formed in 1870 and the first football club to have paid professional players.[22] The team reached the semi-final of the FA Cup in 1880-81 and played in the Football League between 1891 and 1899. The club was wound up at the end of the 2008-09 season and replaced almost immediately by AFC Darwen, which plays in Division One of the North West Counties Football League and is based at the Anchor Ground. Darwen also has a cricket club, Darwen Cricket Club, currently based at Birch Hall Cricket Ground. The club plays in the Northern Premier Cricket League.

To the north-west of the town lies Darwen Golf Club. The characteristics of the course have changed little since the club was established in 1893. Due to its geographical location within the moors, the course is regarded as a tough test of golfing ability. From its peak viewpoint the course has panoramic views of the surrounding area as far out as Blackpool and cascades down into the shadow of Darwen Tower.[23]

Until the Sports Centre was demolished, Darwen was home to the North West Open Karate tournament, which hosted many national and world champions. Tower Shukokai Karate Club[24] was resident at the sports centre from 1988 and remains active. Tower's instructors, Andy Allwood, 5th Dan, and Martyn Skipper 4th Dan, both won this tournament in their respective weight categories (Allwood, heavyweight, in the 1990s and Skipper, lightweight, in 2006 after the tournament had relocated to Bury).