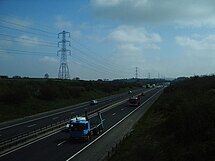 Looking east along the newest section

The M65 is a motorway in Lancashire, running from just south of Preston through the major junction of the M6 and M61 motorways, east past Darwen, Blackburn, Accrington, Burnley, Nelson and ending at Colne.

The M65 was opened in the following sections:

The first section of the motorway was opened in 1981, connecting Burnley to Brierfield. Over the years, several extensions were made, the largest being the link from Whitebirk to the M6 and M61 motorways in 1997. This extension was the scene of a standoff between construction security workers and protesters.

Junctions 1a to 6 were opened 18 December 1997 by Jack Straw, Home Secretary and Member of Parliament for Blackburn. The opening ceremony took place on the westbound carriageway beneath junction 5 at Guide with a heavy police presence as protesters threatened to bring a halt to the proceedings.

Much of the 1997 extension was relaid shortly after it opened with a new, quieter tarmac because the amount of road noise had been so great that it prevented birds of prey (mainly owls) from foraging effectively.

Originally, the M65 was planned to go via the town centre of Blackburn, but opposition by the local council effectively killed this plan off, which was cancelled by the government in 1980 until the 1990s. There were six planned routes, four of which avoided the town centre completely. In the end, the only route to go around the south of the town was selected.

When the M65 was extended, a slip road was built at Walton Summit, south-east of Preston, from the roundabout linking junction 9 of the M61 with junction 2 of the M65 to the Walton Summit industrial estate. It is a single-carriageway road, with two lanes towards the junction (uphill) and one away (downhill). It is around 500 yards long and replaced an A-road spur of the A6 that was built in the 1980s.

According to the statutory instrument that authorised its construction, the road is officially classified as a 'special link road to connect the [M65/M61 roundabout] with the all-purpose road known as Tramway Lane'.[1] It is unclear whether this road forms part of the M61, M65, or neither. 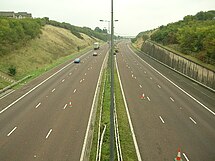