Rochdale's recorded history begins with an entry in the Domesday Book of 1086 under Recedham Manor. The ancient parish of Rochdale was one of the largest ecclesiastical parishes in England comprising several townships. By 1251, Rochdale had become important enough to have been granted a royal charter. Subsequently, Rochdale flourished into a centre of Lancashire's woollen trade, and by the early 18th century was described as being "remarkable for many wealthy merchants".[1]

Rochdale rose to prominence during the 19th century as a major mill town and centre for textile manufacture during the Industrial Revolution. It was a boom-town of the Industrial Revolution, and amongst the first ever industrialised towns.[2] The Rochdale Canal, one of the major navigable broad canals of the United Kingdom, was a highway of commerce during this time used for the haulage of cotton, wool, coal to and from the area. The socio-economic change brought by the success of Rochdale's textile industry in the 19th century led to its rise to borough status and it remained a dominant town in its region.[2] However, during the 20th century Rochdale's spinning capacity declined towards an eventual halt.[2]

Rochdale today is a predominantly residential town. Rochdale Town Hall, a Grade-I listed building, dates from 1871 and is one of the United Kingdom's finest examples of Victorian Gothic revival architecture.[3] Rochdale is the birthplace of the Co-operative Movement.[4] The Rochdale Equitable Pioneers Society, founded in 1844, was the first modern cooperative; the Rochdale Principles are a set of ideals for cooperatives.

Rochdale is not named from its position on the River Roch, but the river name may be a back-formation from that of the town. Its earliest recorded form is as Recedham in the Domesday Book. The name is derived from the Old English reced meaming "hall", and ham, a "homestead". Over time, the name changed to Rachedale and eventually Rochdale.[5]

The river Roch is pronounced "roach", and the name is a back-formation from Rochdale, which of course is pronounced with a short-o.

Rochdale in the wide valley of the Roch

Rochdale stands about 150 feet above sea level in the valley of the River Roch. Blackstone Edge, Saddleworth Moor and the South Pennines are close to the east, whilst on all other sides, Rochdale is bound by smaller towns, including Whitworth, Littleborough, Milnrow, Royton, Heywood, Shaw, Lancashire and Crompton, with little or no green space between them.

Rochdale's built environment consists of a mixture of infrastructure, housing types and commercial buildings from a number of periods. Rochdale's housing stock is mixed, but has a significant amount of stone or red-brick terraced houses from the late 19th and early 20th centuries. Rochdale's Town Hall, seven large tower blocks and a number of former cotton mills mark the town's skyline. The urban structure of Rochdale is regular when compared to most towns in Britain, its form restricted in places by its hilly upland terrain. Much of Rochdale's built environment is centred around a central business district in the town centre, which is the local centre of commerce.

There is a mixture of high-density urban areas, suburbs, semi-rural and rural locations in Rochdale, but overwhelmingly the land use in the town is urban.

The M62 motorway passes to the south and south-west of Rochdale. Two heavy rail lines enter Rochdale from the east, joining at Rochdale railway station before continuing southwards to the city of Manchester. 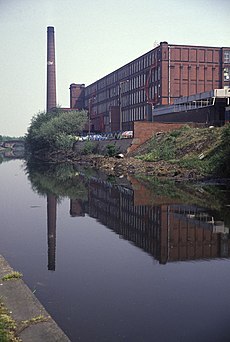 A Roman road, leading from Mamucium (Manchester) to Eboracum (York), crossed the moors at Blackstone Edge.[6]

During the time of the Norse-Danish invasions, Rochdale was subjected to incursions. The castle that Castleton is named after, and of which no trace remains, was one of twelve Saxon forts possibly destroyed in frequent conflicts that occurred between the Saxons and Danes during the 10th and 11th centuries.[6]

Rochdale appears in the Domesday Book as Recedham. On the eve of the Norman Conquest the manor was held by a Saxon thegn, Gamel. Gamel had retained the manor after the conquest and was one of the twenty-one thegns of the Salford Hundred, or Salfordshire.

Rochdale was recorded in 1066 as held by Hundred of Salfordshire.[7]

Before 1212 Henry II granted the manor to Roger de Lacy whose family retained it until it passed to the Dukes of Lancaster by marriage and then by 1399 to the Crown.[6][7]

Rochdale was a market town, and weekly markets were held from 1250 when Edmund de Lacy obtained a grant for a market and an annual fair.[6] The market was held outside the parish church where there was an "Orator's Corner".

John Byron bought the manor in 1638 and it was sold by the poet, Lord Byron, in 1823, to the Deardens, who hold the title. Rochdale had no manor house but the "Orchard" built in 1702 and acquired in 1745 by Simon Dearden was the home of the lords of the manor after 1823. It was described as "a red-brick building of no architectural distinction, on the north side of the river opposite the town hall" and sometimes referred to as the Manor House. It was demolished in 1922.[8]

The manufacture of woollen cloth particularly baize, kerseys and flannels were important from the reign of Henry VIII. At this time the industry was rooted in the domestic system but towards the end of the 18th century mills powered by water were built.

Water power was replaced by steam power in the 19th century and coal mines, mostly drift mines, were opened where coal from the lower coal measures outcropped around the town. The Deardens who were lords of the manor were among the local coal owners.[9] By the mid 1800s the woollen trade was declining and the cotton trade which took advantage of technological developments in spinning and weaving growing in importance.[10] Rochdale became one of the world's most prolific cotton spinning towns when rose to prominence during the 19th century as a major mill town and centre for textile manufacture during the Industrial Revolution. It was a boom town of the Industrial Revolution, and amongst the first ever industrialised towns.[2]

By the end of the 19th century there were woollen mills, silk manufacturers, bleachers and dyers but cotton spinning and weaving were the dominant industries in Rochdale.[11] The socioeconomic change brought by the success of Rochdale's textile industry in the 19th century led to its rise to borough status and it remained a dominant town in its region.[2] However, during the 20th century Rochdale's spinning capacity declined towards an eventual halt.[2] 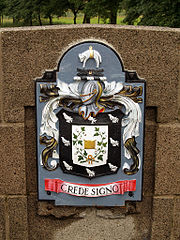 The arms of the former borough

In 1825 commissioners for the social and economic improvement of the town were established. The town became part of a parliamentary borough in 1832. Under the terms of the Poor Law Amendment Act 1834 Rochdale became the head of Rochdale Poor Law Union which was established on 15 February 1837 despite considerable local opposition.[12] In 1856 Rochdale was incorporated as a municipal borough and after 1858 it obtained the powers of the improvement commissioners. In 1872 the remaining area of Wardleworth township and parts of Castleton, Wuerdle and Wardle, Spotland and Butterworth townships were added to the borough. Arms were granted to the council on 20 February 1857. The arms incorporate references to Rochdale's early industries and lords.[13]

The "Rochdale Pioneers" opened the first Cooperative shop in Toad Lane in 1844,[14] thus creating the co-operative movement. They established the "Rochdale Principles", a set of ideals which still guide cooperatives.

The reformer and Member of Parliament, John Bright (1811–1889), was born in Rochdale and gained a reputation as a leader of political dissent and supporter of the Anti-Corn Law League.[15] 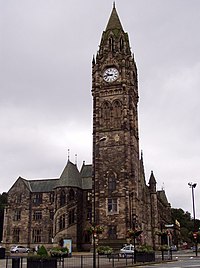 Rochdale Town Hall is a Victorian-era municipal building "widely recognised as being one of the finest municipal buildings in the country".[16] It is Grade-I listed and remains the ceremonial headquarters of the local council, housing several local government departments.

The Town Hall was built in the Gothic Revival style by William Henry Crossland, who won a competition held in 1864. It was inaugurated on 27 September 1871. The Town Hall had a 240-foot clock tower topped by a wooden spire with a gilded statue of Saint George and the Dragon which were destroyed by fire on 10 April 1883. A new 190-foot stone clock tower and spire in the style of Manchester Town Hall was designed by Alfred Waterhouse, and erected in 1888.

Nikolaus Pevsner described the building as possessing a "rare picturesque beauty".[17] Its stained glass windows, some designed by William Morris, are credited as "the finest modern examples of their kind".[16] The building came to the attention of Adolf Hitler who was said to have admired it so much that he wished to ship the building, brick-by-brick, to Nazi Germany had the United Kingdom been defeated in the Second World War.[18][19]

The war memorial bearing four sculpted and painted flags, is opposite the town hall. It commemorates those who died in conflicts since the First World War (1914–1918). The monument and surrounding gardens were designed by Sir Edwin Lutyens.[20][21] 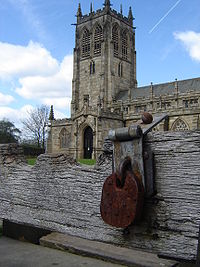 St Chad's Church is the mother church of the ancient parish and was founded before 1170 possibly on a Saxon site. Much of the current building is the result of late Victorian restoration. A local legend relates that the site was chosen by spirits and fairies as on several occasions stone for the church building was moved from near the river to the hill on which St Chad's stands. The church is accessed from the town below by a flight of 124 steps.[22] The town stocks (no longer in use) are in the churchyard.

Both play home games at the Spotland Stadium. Rochdale AFC were founded in 1907 and joined the Football League in 1921 when the new Football League Third Division (north) was created.[23] The club has never played above the third tier of the English league divisional structure, and before its promotion at the end of the 2009/10 season (their first promotion since 1969), had played continuously in the Football League's lowest division since 1974.

Rochdale Hornets is one of the original twenty-two rugby clubs that formed the Northern Rugby Football Union in 1895, making it one of the world's first rugby league teams.[24]

Other sports clubs include: