Gresford is a village and parish in Denbighshire. According to the 2001 Census, the population of the parish, which also includes the village of Marford, was 5,334.[1]

The former Gresford Colliery was the site of the Gresford disaster, one of Britain's worst coal mining disasters, when 266 men died in an underground explosion on 22 September 1934.

Located close to the Cheshire border, the settlement existed at the time of the compilation of the Domesday Book, when it was recorded as "Gretford"[2] within the Cheshire Hundred of Duddestan. The name, having an English origin, was later recorded as "Gresworth", "Cresford" and "Grefford", but documentary evidence shows that the place was clearly locally referred to as "Gresford" throughout its history.

In common with many of the towns and villages of the border lands, or Marches, Gresford has gone through periods of both English and Welsh dominance. The whole area was resettled by Welsh aligned to Owain Gwynedd in 1170-1203. At this time the bishopric was transferred from that of St Werburgh's Chester to St Asaph, and the vicars of the village were Welsh with patronymic names (for example, Morud ap Gwarius, who became vicar in 1284). It is possible, however, that settlement existed on the site from quite an early date, as a Roman altar was found within the church in 1908. The altar is likely to depict Nemesis; this and the unearthing of a Roman coin hoard nearby-dating 150-300, is possible evidence of a settlement. There is also a stand of yew trees in the churchyard the oldest dating to AD 500 — long before Anglo-Saxon settlement.

Approaching Gresford from the Wrexham direction, on the left hand side of the road, there was a tree known as 'The Cross Tree', and alongside this there is the base of an ancient stone cross. This tree was removed after 1984, and has since been replaced with a young tree. 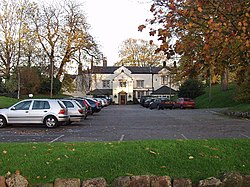 Until the late 19th century, the parish boundary encompassed a large area, including the townships of Burton, Llay, Rossett and Gwersyllt, as well as several townships later included in Isycoed. The bells of the parish church, All Saints' are one of the traditional Seven Wonders of Wales. Gresford Church dates to 1492 and is a large building considering the size of what the population would have been in the present-day boundaries of the parish. The base of the church tower has earlier remnants of a previous building and an earlier roofline of a former transept can be detected in the tower. The colour of the stone is quite distinctive, and is typical of the Wrexham area. It is a sandy brown Millstone Grit, locally referred to as "Cefn" stone.

Pant Iocyn (later Pant-yr-Ochain) house was built in the 1550s alongside the road from Gresford to Wrexham by Edward Almer MP and three times High Sheriff of the county. It was one of the chief houses in east Denbighshire and descended in the Almer family until it was bought and enlarged by Sir Foster Cunliffe, 3rd Baronet in 1785. The 18th century addition now serves as a gastro pub.[3]

Henry Dennis and his son, Henry Dyke Dennis, began sinking a coal mine near Gresford in 1888,[4] taking four years for the 2,264-ft deep shafts to be completed. The coalmine was located on the edge of the Alyn Valley, between the Shrewsbury and Chester Railway (later the GWR Birkenhead-Paddington line) and the old main road between Wrexham and Chester. The first coal was produced from June, 1911, with full production reached before the outbreak of World War I. The coal was renowned in the area as being of very good quality and hot burning.

Gresford Colliery was the site of one of Britain's worst coal mining disasters. The Gresford Disaster occurred on 22 September 1934, when 266 men died following an underground explosion. The bodies of only 11 of the miners underground at the time of the explosion were recovered. The headgear wheel is preserved and forms part of the Gresford Disaster Memorial, along with a plaque. The disaster is commemorated in the hymn tune "Gresford", which is also known as "The Miners' Hymn", written by Robert Saint of Hebburn, himself also a miner.[5] This tune has been played regularly by many colliery brass bands over the years and is found on a number of recordings, and is also played at the annual Miners Picnics around the north of England, especially at the Durham Miners' Gala.

The colliery lasted until 1973 when it was closed due to geological problems.

The stone-built Gresford railway station, on the Shrewsbury and Chester Railway was midway up the notorious Gresford Bank. The bank was so steep that a refuge siding was required at the station in the event of engines having to leave some of their load behind to get up the hill. Banking engines were also used on occasions. Gresford railway station was demoted to Gresford Halt, for Llay, from 1956 and was closed altogether from 1964.