Gwersyllt is an urban village and parish in Denbighshire situated north-west of Wrexham.

The densely-populated village is one of Wrexham's largest and is situated in the north western suburbs of the town, bordering the nearby villages of Llay, Cefn-y-Bedd, and Sydallt. The parish, also including the villages of Summerhill] and Bradley, had a total population of at the 2001 census.[1]

The name is usually stated to be derived from the Welsh language word, gwersyll, meaning "campsite", with the final t common in the area's dialect.[2] This is, however, a comparatively modern form, and during the mediæval period the name was written as "Wershull" or "Wersull", with "Gwershull" and "Wersham" occurring in the 16th century. It is therefore possible that the present name, like others in the area, is a Welsh adaptation of an earlier English name ending in "-hull" (i.e. "hill").[2]

Gwersyllt was originally a township of the parish of Gresford, and by 1833 had 834 inhabitants.[3] The gradual increase of the area's population in the industrial era led to Gwersyllt being formed as a new civil parish in 1851, combining the old township of Gwersyllt and parts of the neighbouring township of Stansty.[3] The parish church, from plans by Thomas Penson, was consecrated at the same time.[4]

The village grew rapidly with the local coal mining industry and the area was home to several collieries, of which many features still remain. In 1896, the Gwersyllt coal mine owned by Edward Griffiths had 185 employees with 167 below ground. It was in operation by 1881.

The area was situated between the collieries of the Moss Valley and Bradley and benefited from good rail links on the former Wrexham, Mold and Connah's Quay Railway to Wrexham, Birkenhead, Ellesmere Port, Brymbo and New Brighton. A canal also was planned to run through the parish with the intention of forming part of the Ellesmere Canal. Evidence of the canal cuttings can still be seen alongside the Sydallt junction between the Summerhill Bottom Road and A541 Mold Road, and a local street, named Heol-y-Camlas, meaning Canal Road in Welsh, lies on the former canal alignment.

In the mid-20th century, large council estates were built amongst the existing village, extending the size of the community and its services substantially.

A number of leisure and lifestyle facilities are available for local residents. Gwyn Evans Sports Centre, named after a local councillor and school teacher, is a council-operated leisure centre, consisting of a 25-metre swimming pool and multi-use sports hall, within the grounds of local secondary school, Ysgol Bryn Alyn. The school additionally offers an outdoor astroturf multi-use games area, situated adjacent to the leisure centre. The newly built Gwersyllt Community Resource Centre provides a large bookable function hall and meeting rooms, along with Gwersyllt Library, which is open six days a week.

A number of public houses have been central to the area, including The Wheatsheaf and Gwersyllt Working Men's Club, along with those in the wider Gwersyllt Community in Summerhill, Bradley and Gresford.

Gwersyllt's largest shopping centre is known locally as the Kwik Save Centre, an outdoor precinct formally headed by the Kwik Save supermarket chain. Today it consists of Tesco, Iceland and a number of local retailers. German discount supermarket Lidl also operates a store adjacent to Gwersyllt railway station, along with a number of locally owned shops, food outlets and hairdressers around the community.

Gwersyllt CP and Ysgol Heulfan are both English-medium primary schools. Gwesyllt CP was created in 2007 by the amalgamation of Ysgol y Gaer Infant School with Gwersyllt County Primary Junior School, and Ysgol Heulfan was created in 2005 by the merger of Ysgol Bryn Golau Infants, Ysgol Y Drindod Juniors and Ysgol Powys. Ysgol Bro Alun is a Welsh-medium primary school which opened in 2013.

A centre for alternative curriculum programmes continues in the former building of Ysgol Powys.

Pen-y-Maes Health Centre is the local clinic, being staffed by doctors, nurses and regular health visitors, and also incorporates a pharmacy.

Gwersyllt's former heavy industries of coalmining and manufacturing have declined over the 20th Century. Much of the former land of these industries has been reclaimed, mostly as housing. However a number of industrial warehouses continue, namely of building supplies, car sales and double-glazing window manufacturing. The Studios is the headquarters of the former Marcher Radio Group, which produces and broadcasts radio programmes to the local Heart stations, formally Marcher Sound, Buzz 97.1, Coast 96.3, Champion FM 103, along with Wrexham and Chester Gold. 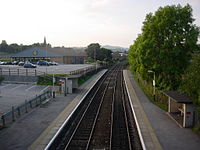 The A541 road, locally known as the Mold Road is the main thoroughfare into Wrexham southbound, and northwards through south Flintshire onto Mold. The parish is also near to the A483 road via the Gresford and Wrexham junctions.

Public bus transport is provided by Arriva Buses Wales and GHA Coaches on services from Wrexham to Summerhill, Mold, Flint and Deeside on Monday to Saturdays. A reduced service operates on Sundays and bank holidays, subsidised by Wrexham Council and provided by Arriva.