Llanelidan is a small village and parish in Denbighshire. The parish also includes the hamlet of Rhydymeudwy.

The church, village hall and pub all lie within 200 yards of each other overlooking the village cricket ground and pavilion. Also in the village centre is King George's field, land belonging to the Nantclwyd Estate, but available for use by villagers. 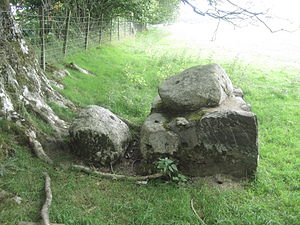 The village of Llanelidan is located just off the A494 road between Ruthin and Corwen in the valley of Afon y Maes, a tributary of the Clwyd. The River Clwyd forms part of the western boundary of the parish, which extends further east and south of the village, covering much of the area in the triangle formed by the A-roads joining Ruthin, Corwen and Llandegla. The southernmost tip of the community is marked by Bwrdd y Tri Arglwydd (the table of the three lords), an ancient stone monument marking the point where the lordships of Ruthin, Glyndyfrdwy and Yale met. It is currently the meeting point between the parishes of Llanelidan, Bryneglwys, Corwen and Gwyddelwern.

Llanelidan is a pretty, scattered hamlet in the green valley of the Afon y Maes, a tributary of the Clwyd. The church - uniquely dedicated to a local saint - stands beside the Leyland Arms public house, surrounded by yews and old Welsh tombstones. Built in the 15th century and ‘double-naved’ in the distinctive local style, it retains many mediæval features despite extensive Victorian restoration. There are a pair of barrel-vaulted ‘canopies of honour’ over the altar spaces, fragments of medieval glass - notably the symbols of the crucifixion in blue shields above the altar - and above all a wonderful display of carved woodwork. Sections of the medieval rood screen (which must have been especially fine) are set by the pulpit, including horse-like beasts, intricate roundels, and trails of vines and ivy-berries. The Jacobean pulpit has carvings of its own, with more panels of the same date behind the altar. Old box pews, monuments to successive squires of nearby Nantclwyd Hall, and a touching portrait of the local Roman Catholic martyr Edward Jones are noteworthy.[1]

In December 1873, Major Walter Clopton Wingfield designed an early version of lawn tennis — which he called sphairistike (Greek: σφάίρίστική, meaning "skill at playing at ball"), and was soon known simply as "sticky" — for the amusement of his guests at a garden party at Nantclwyd Hall in Llanelidan.[2][3][4]